Euro/dollar  recovered nicely as leaders finally seemed to wake up and encounter the Spanish crisis. Can this hope continue for another week, before the Greek elections?  The upcoming week consists of important inflation and industrial output indicators. Here is an outlook for the upcoming events and an updated technical analysis for EUR/USD.

Updates: the EU decided on a Spanish bailout worth up to â‚¬100 billion. This could be cheered by the markets, but probably for a short time, as there are 8 holes in the Spanish bailout. The ECB, which is the single most powerful factor, hasn’t offered any help. Is it waiting for politicians to move first? This is part of the hope in the markets for now. Also the chances for more money dropping from the US are lower as well, after Bernanke didn’t provide any hints about QE3, and even said that “returns are diminishing“. French Industrial Production surprised the markets with a 1.5% jump, its best figure since September 2011.    The euro has fallen after the initial euphoria over the Spanish bailout, and was trading at 1.2556. French Final Non-Farm Payrolls grew by a very modest 0.1%, matching the market estimate. The euro continued to fall, as EUR/USD was struggling to stay above the 1.25 line. The pair was trading at 1.2509.    Trouble in the Spanish banking sector continue, despite the bailout. On Monday, the Fitch ratings agency downgraded the credit rating of Spain’s two largest international banks, Banco Santander and Banco Bilbao Vizcaya Argentaria, from A to BBB+. French CPI dropped 0.1%, below the market forecast of a 0.2% gain. German Final CPI declined 0.2%, matching the market estimate. Euro-zone Industrial Production posted a weak reading of -0.8%, a four-month low. The German 10-y Bond Auction took place today. The auction posted results of 1.52|1.4. EUR/USD continues to be choppy. The pair was trading at 1.2546.    Italy plans to auction at least 9.5 billion euros ($11.9 billion) of debt this week. The yield on Italian 10-y bonds is already up to 6.3%, which could spell fiscal trouble ahead. German WPI fell below the market forecast, declining 0.7%.  Euro-zone CPI came in at 2.4%,  matching the market estimate. The Core CPI recorded a 1.6% increase, just below the  forecast of 1.7%. The ECB released its monthly bulletin. Spain’s 10-year bond yields hit a euro-era record of 7 percent,  as concerns continue on  the country’s ability to  service its debt.  Italy auctioned off EUR4.5 billion  in government bonds  on Thursday. The markets are very concerned about the high cost of the debt, as the yield on 10-year bonds has now risen to 6.30%. 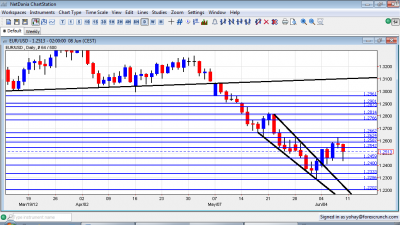 Euro USD started the week by trading between 1.24 and 1.2540. It then broke higher but couldn’t make a move above the all-important 1.2624 line (mentioned last week). It then lost the high range and eventually closed at 1.2513.

1.2760 is a pivotal line in the middle of a trading range seen earlier.. It provided support early in the year and is now of high importance. 1.2660 was a double bottom during January and the move below this line was confirmed after a struggle.

1.2623 is the previous 2012 low and remains important. Attempts to rise above this line have failed, including in June 2012. This is a critical resistance line separating ranges . Below, 1.2587 is a clear bottom on the weekly charts but is only minor resistance now.

The steep downtrend channel mentioned last week was clearly broken to the upside.

Has Germany really bent for the euro? Is it becoming more flexible on Spanish aid, eurobonds and a fiscal union like it is pressured to? This is still to be seen. In the meantime, some stability on hope for global action can be expected before the Greek elections on June 17th. Afterwards, it’s a different story.

In Greece, thing are beginning to collapse. the state’s coffers are running dry as Greeks defer tax payments and even providing electricity is becoming challenging.,Also pharmacies are in a grave situation The implications of a Grexit for the European banking system and for other countries  are not fully priced in.  Here’s how to trade the Grexit with EUR/USD.

Euro/dollar  recovered nicely as leaders finally seemed to wake up and encounter the Spanish crisis. Can this hope continue for another week, before the Greek elections?  The upcoming week consists of important inflation and industrial output indicators. Here is an outlook for the upcoming events and an updated technical analysis for EUR/USD. Updates: the EU decided on a Spanish bailout worth up to â‚¬100 billion. This could be cheered by the markets, but probably for a short time, as there are 8 holes in the Spanish bailout. The ECB, which is the single most powerful factor, hasn't offered any help.…