Euro/dollar  had a fifth consecutive week of downfalls as the situation in Spain is deteriorating  quickly, “winning” more negative attention than Greece and Italy. The upcoming week at the wake of the new month is quite busy, with a rate decision by the ECB being the highlight. Will the central bank step up to stabilize the situation?    Here is an outlook for the upcoming events and an updated technical analysis for EUR/USD. Conditions are also worsening on the other side of the Atlantic: Non-Farm Payrolls came out below the most pessimistic forecast and downwards revisions also soured the mood. Nevertheless, the chances of QE3 still remain low in the current conditions, and more negativity from Europe certainly cannot be excluded. Updates: Economic releases continue to paint a grim picture in the Euro-zone. The EZ Unemployment Rate nudged up to 11.0%.  Investor Confidence posted its worst performance in over three years, coming in at -28.9 points. Euro-zone PPI came in at at flat 0.0%, well   below the market forecast of 0.3%. EUR/USD is  steady, and was  trading  at 1.2432.  Last week’s  awful  US employment releases are raising the possibility of Fed intervention.   Italian Services PMI came in at 42.8 points, beating the estimate of 41.8. Euro-zone Final Services PMI recorded a reading of 46.7 points. This was a bit above the forecast of 46.5. Euro-zone Retail Sales fell 1.0%, well below the market prediction of -0.1%. German Factory Orders also disappointed, contracting by 1.9%. The estimate stood at a much smaller decline of 1.0%.The G7  finance ministers  are holding a teleconference today, and the markets are hopeful of some concrete steps regarding the EZ crisis.  There is talk of the ECB cutting interest rates in order to help the struggling economies of the EZ. However, ECB head Draghi has repeatedly stated that it is up the the governments’ to take action. The consensus is that rates will remain at 1.0%. EUR/USD is unchanged, as the pair was trading at 1.2431.  The G7 meeting ended,  with no concrete actions to help  the EZ.  The ECB left its benchmark interest rate unchanged, at a rate of 1.0%.    ECB head Draghi will be following with a press conference, which the markets are sure to follow attentively.  The markets had hoped for a rate cut by the central bank would provide some stability for rattled markets. Euro-zone Revised GDP came in at a flat 0.0%, exactly as predicted. German Industrial Production looked awful, plunging 2.2%. The release is particularly worrying, coming on the heels of Tuesday’s German Factory Orders, which  also fell steeply.  The euro is down after the ECB rate announcement. EUR/USD fell below the 1.25 line, trading at 1.2484. The Spanish 10-y auction raised over EUR 2 billion, with a yield of 6.04|3.3. The French 10-y auction posted a yield of 2.46|2.0. The euro has improved, climbing back above the 1.25 line. The pair was trading at 1.2586. 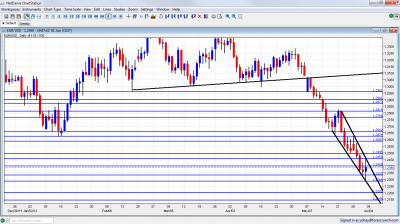 * All times are GMT EUR/USD Technical Analysis â‚¬/$ opened the week without a gap for a change. After an attempt to climb over the 1.2814 line (mentioned  last week), the pair fell gradually and hit a bottom of 1.2288 before rebounding. All in all, this was another terrible week for the weak currency. Technical lines from top to bottom: We lower the starting point once again.  1.2873 is the previous 2011 low set in January, and it is distant resistance now. This is a very strong line separating ranges, as also seen in May 2012. 1.2814 is now stronger after being a clear line separating ranges in May 2012. 1.2760 is a pivotal line in the middle of a trading range seen earlier.. It provided support early in the year and is now of high importance. 1.2660 was a double bottom during January and the move below this line was confirmed after a struggle. 1.2623 is the previous 2012 low and remains important, now as resistance. Attempts to rise above this line have been . Below, 1.2587 is a clear bottom on the weekly charts but is only minor resistance now. The round number of 1.25 is of psychological importance, and it is stronger now as resistance. 1.2460 is minor resistance after stopping a euro rally in June 2012. 1.24. It provided some resistance in June 2010 and is now minor support. 1.2286 is a new minor line of support after being the swing low in June 2012. Further below, 1.2330 is another historical line after being the trough following the global financial meltdown in 2008. 1.22 is minor support below, after serving as such in June 2010. 1.2144 is already a very strong line on the downside: it was a clear separator two years ago, when Greece received its first bailout. The round number of 1.20 is of course highly important in the psychological level. Below, the 2010 trough of 1.1876 is apparent, before the launch value of the euro at 1.17 to the dollar in 1999. Steep Downtrend Channel After the previous steep downtrend channel was broken, we can see a new narrowing downtrend and steep channel on the graph. I remain bearish on EUR/USD The situation in Europe continues deteriorating and no bottom is in sight: Italy paid a very dear price int he latest bond auction, and it is certainly unsustainable. Spain is getting too close to some kind of a bailout as the capital flights continues. In Greece, money isn’t waiting for the polls either: the state’s coffers are running dry as Greeks defer tax payments and even providing electricity is becoming challenging., The implications of a Grexit for the European banking system and for other countries  are not fully priced in.  Here’s how to trade the Grexit with EUR/USD. What can boost the euro? As aforementioned, a coordinated action by central banks can certainly reverse the situation. Also a US/UK style QE blitz by the ECB. Is the ECB up for the challenge? At least now, the answer is no. In the US, the situation has definitely worsened, but QE3 is still quite far as it is becoming clear that it will not help the economy. The US weakness can just add to the “flight to safety” that boost the greenback. If you have interest in a different way of trading currencies, check out the  weekly binary options setups, including EUR/USD, GBP/JPY and more. Further reading:

Euro/dollar  had a fifth consecutive week of downfalls as the situation in Spain is deteriorating  quickly, "winning" more negative attention than Greece and Italy. The upcoming week at the wake of the new month is quite busy, with a rate decision by the ECB being the highlight. Will the central bank step up to stabilize the situation?    Here is an outlook for the upcoming events and an updated technical analysis for EUR/USD. Conditions are also worsening on the other side of the Atlantic: Non-Farm Payrolls came out below the most pessimistic forecast and downwards revisions also soured the mood.…

Olimpiu Tuns10 years
Scroll Up
We use cookies to ensure that we give you the best experience on our website. If you continue to use this site we will assume that you are happy with it.Ok