Euro/dollar  saw some excitement with the Spanish bailout but then stabilized in anticipation to the bigger event. The Greek elections are undoubtedly a huge event that will dominate the markets for a long time. Many meetings are planned for after the polls and they might serve as an opportunity to present contingency plans Apart from Greece, there are a few other indicators worth noting. Here is an outlook for the upcoming events and an updated technical analysis for EUR/USD.

Spanish yields touched the 7% for some time in the past week. This is the level that other sovereigns got a bailout. The â‚¬100 billion bailout plan seems insufficient and certainly not limited to banks. There are too many holes in the plan. On the other side of the Atlantic, the majority of economic figures continues disappointing. Nevertheless, the current US yields mean that more QE will not have any significant effect, and dollar bears might be disappointed with Bernanke once again. For now, it’s all Greek. Let’s start:

Updates: Very early and unofficial exit polls in Greece show a narrow lead for pro-bailout New Democracy. Many young voters haven’t cast their votes at the time of these exit polls. There is speculation that coordinated central bank action could be announced before markets open. Initial official exit polls show a technical tie between SYRIZA and New Democracy. With votes from younger voters missing, this could be encouraging for SYRIZA. Final exit polls point to a victory for New Democracy, but it’s still too close to call. There was a collective sigh of relief across the Euro-zone late Sunday night, as the New Democracy party claimed a hard-fought, narrow victory after election results were released. The euro climbed as high as 1.2748 following the results, but then retraced as the market euphoria dissipated. The euro was also hurt by the fact that in Spain, government yields climbed above the 7% level, to 7.13%. EUR/USD was moving downwards, trading at 1.2639. There are no releases out of the Euro-zone on Monday, but the markets will be bracing for German ZEW Economic Sentiment on Tuesday. Euro-zone ZEW Economic Sentiment plunged to -20.1 points, its worst performance since January. German ZEW Economic Sentiment was also a major disappointment, falling to -16.9 points.  Germany has churned out a host of weak releases, and further poor data  will be sure to alarm the markets, which are already jittery. The yield on Spanish bonds continues to rise, with the latest figure reaching 7.27%. Coalition talks continued in Athens, and good progress was reported. The formation of a new Greek government could be announced as early as today. German data continues to disappoint, as PPI contracted by 0.3%. The markets had expected a more modest 0.1% drop. All eyes are on the Federal Reserve, as there is talk (and hope) that the Fed will announce some monetary easing at its policy meeting on Wednesday. Regardless of the Fed’s decision, we could see some reaction from the currency markets and movement by EUR/USD. There was good news out of Athens, as a new Greek government was sworn in on Wednesday. The coalition is committed to the bailout package, but will likely seek some easing of conditions to make it more palatable to the Greek public. The Federal Reserve refrained from introducing any QE, but did extend Operation Twist. German data continued to disappoint, with a set of PMIs falling below the market forecast. French PMIs were better than the market estimates. Euro-zone Current Account posted a reading of 4.6 billion, well below the market forecast of 7.3B. The Euro-zone PMIs practically matched the market predictions. Euro-zone Consumer Confidence will be released later on Thursday. As well, ECB head Mario Draghi will be delivering a speech in Frankfurt. EUR/USD was trading at 1.2690. 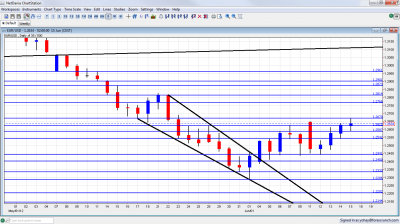 Euro USD kicked off the week with a Sunday gap and flirted with the 1.2660 line (mentioned last week). This was short lived, and the pair fell to 1.2440. It then recovered, settled above 1.2540 and eventually closed close to the week’s highs.

Due to high volatility expected this weekend, we start from higher levels. The round number of 1.30 was a tough line as support, and pro-bailout victory in Greece could challenge this line. 1.2960 is close by, after providing some support before the bigger fall.

1.2760 is a pivotal line in the middle of a trading range seen earlier.. It provided support early in the year and is now of high importance. 1.2670 was a double bottom during January and was the high line of the recovery before the Greek elections in June.

Even the pro-bailout camp wins the Greek elections, the situation there is terrible: the state’s coffers are running dry as Greeks defer tax payments and even providing electricity is becoming challenging.. A Grexit seems imminent, it is  not fully priced in.  Here’s how to trade the Grexit with EUR/USD.  As we’ve seen with the Spanish bailout, a rally will likely be short lived.

If SYRIZA wins the euro will plunge and will need coordinated help from leaders and central bankers to stabilize. With politicians digging deeper into their positions, the only hope is from the powerful ECB. But is it up for the challenge? The question remains open.

In the US, if no coordinate action is agreed upon, Bernanke is not likely to act. He said that returns on QE are “diminishing”. This is another factor that can hurt the euro.

Euro/dollar  saw some excitement with the Spanish bailout but then stabilized in anticipation to the bigger event. The Greek elections are undoubtedly a huge event that will dominate the markets for a long time. Many meetings are planned for after the polls and they might serve as an opportunity to present contingency plans Apart from Greece, there are a few other indicators worth noting. Here is an outlook for the upcoming events and an updated technical analysis for EUR/USD. Spanish yields touched the 7% for some time in the past week. This is the level that other sovereigns got a…