Apart from news about debt issues, inflation and industrial production are the highlight’s of this week’s European events. Here’s an outlook for these events and an updated technical analysis for EUR/USD. 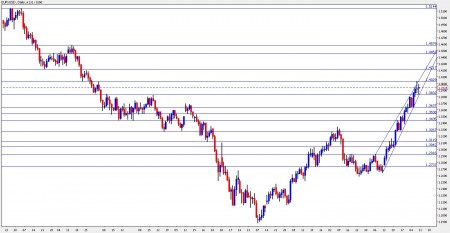 Europe isn’t participating in the global currency war, and found itself losing – seeing the Euro rise. But this can’t go on forever. Where will it go this week? Let’s start:

EUR/USD is capped by 1.4029 – the line that was the peak in the past week and also a peak in February. The round 1.40 level is eyed by many politicians.

Above, 1.4217 capped the pair in January and served as a support line in December. Higher, 1.4450 worked as a support and resistance line during that same period of time. The next level is 1.4580 which was a stubborn peak around January as well.

Looking down, 1.3830 proved to be a tough line in the past week, and also during February and March. 1.3637 was the bottom in the past two weeks and is another strong line of support.

Lower, 1.3530 worked as support at the beginning of the year, and also in recent weeks. Below, 1.3435 provided strong support in February and is now a minor line.

The next lines below are 1.3267, which provided support recently, and 1.3114, which worked in both directions many times in the past. There are more lines below.

It’s also important to note the steep uptrend channel (also marked in the graph). While the uptrend resistance line is harder to draw, the uptrend support is clear. EUR/USD got close to this line in the past week, but managed to hold on to the channel.

I am bearish on EUR/USD.

There are many reasons why the Euro became vulnerable. It has already shown signs of weakness by not holding on to 1.40 – a line that is closely watched European officials. In addition, the size of the new American QE program isn’t necessarily that big. Uptrend support should be closely watched this week.

EUR/USD gets excellent coverage on the web. Here are my picks:

Apart from news about debt issues, inflation and industrial production are the highlight's of this week's European events. Here's an outlook for these events and an updated technical analysis for EUR/USD. EUR/USD graph with support and resistance lines on it. Click to enlarge: Europe isn't participating in the global currency war, and found itself losing - seeing the Euro rise. But this can't go on forever. Where will it go this week? Let's start: French Industrial Production: Published on Monday at 6:45. Europe's second largest economy enjoyed a nice rise in industrial output last month - 0.9%. This figure is…