GBP/USD plunged 3.6% last week, its worst weekly showing since March. The upcoming week has four events, including inflation and the Bank of England decision. Here is an outlook for the highlights and an updated technical analysis for GBP/USD.

The pound was pummeled last week, in large part due to renewed tensions over Brexit. The British government has published a bill to which allows the UK to “disapply” parts of the withdrawal agreement it signed with the EU in January. Predictably, the EU was upset and has demanded that the bill be withdrawn.

Overshadowed by the Brexit turbulence was some strong economic data out of the UK on Friday. In July, GDP came in at 6.6%, which marked a third straight gain for the monthly GDP release. Industrial Production and Manufacturing Production both beat expectations, with gains of 5.2% and 6.3%, respectively.

In the US, unemployment claims were worse than expected. The indicator was almost unchanged at 884 thousand, higher than the estimate of 838 thousand. Inflation remained weak, as consumer inflation slowed in August. Both the headline and core readings reading dropped from 0.6% to 0.4%. Still, both releases beat their estimates. The Producer Price Index, another important inflation gauge, also slowed in August.

GBP/USD daily graph with resistance and support lines on it. Click to enlarge: 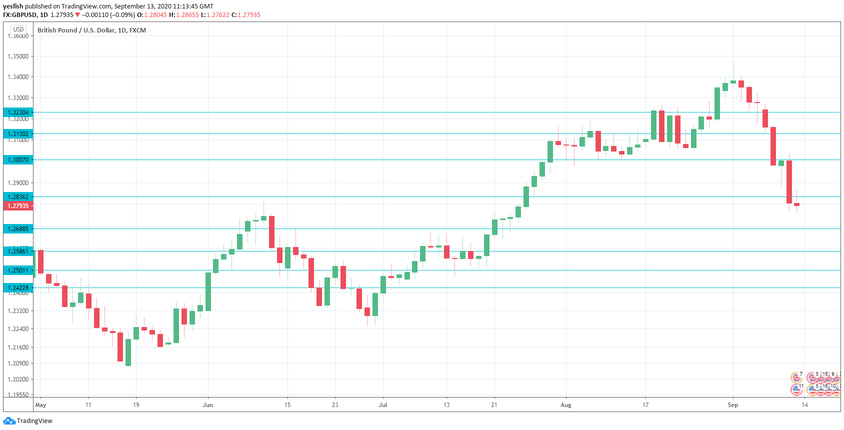 With the pound dropping sharply last week, we start at lower levels:

I am bearish on GBP/USD

Tensions over Brexit sent the pound on its backside last week, and with the EU and UK at odds over a range of issues, the pound could face more turbulence.