Home » GBP/USD prospects are not so good – 3 opinions

GBP/USD prospects are not so good – 3 opinions

GBP/USD  fell for a third week in a row but there may be more in the pipeline, all because of Brexit. Here are three opinions about the prospects for cable:

In the week that has followed, the rate of decline in  both pairs puts us well on course to meet these targets.

In the case of GBP, BoE Chief Carney has gone out of his way to both warn of the bleak outlook for the UK economy and to assure markets that the central bank will do everything possible to counteract this with liquidity injections and fresh easing measures. The market has also taken a clear message that a weaker GBP will be a welcome addition to the list of ameliorative tools available. Indeed, with the UK political establishment in disarray and the wider public mood one of bitterness and recrimination, one of the few sources of agreement seems to be the idea that a weaker GBP is helpful at this time.

We will not go over once again our underlying reasons for GBP weakness based on fundamentals and balance of payments. Rather, we will emphasize that the monetary policy and political environment that is materializing is supportive of our view.

Importantly,  “wishful thinking” ideas popular last week focusing on the possibility of a second referendum or Article 50 never being triggered have taken a back seat  given the consistent commentary from leading figures in the ruling Conservative Party arguing in favor of pushing on and implementing the referendum outcome.

Also hurting GBP has been more direct pain in the form of the gating of a number of commercial property funds. As well as highlighting the worrying possibility of both a property price shock and stretched investor positions in the sector, we note concerns about the exposures of the UK and European banking systems.

GBP: Use Any Bounce As An Opportunity To Sell Into Next Week’s BoE – BofA Merrill

BoE rate cuts.  Given the uncertainty and likely economic downturn, we expect the BoE to use its financial crises play book. That means ignoring sterling driven inflation, quickly taking interest rates to, or close to, zero and subsequently restarting QE. We change our call a little though. We had expected a 50bp rate cut, taking interest rates to zero, on July 14.  We now look for rates to be cut to 40bp to 0.1%

We also expect the BoE to restart QE, possibly as early as August. Carney signaled that was on the table, along with other measures. He was not specific about those possible other measures, but our best guess would be that the BoE copies some of the ECB’s innovations.

Sterling has continued to weaken in aftermath of the EU Referendum with GBP/USD falling to its lowest levels since 1985 and with many of the other GBP crosses hitting multi-year lows. And even though the move have been sizeable,  we think there is further weakness in store which poses downside risks to our 1.25 cyclical low in GBP/USD.

The evidence on the macroeconomic fall-out from the Referendum result is still in its anecdotal phase but the initial signs have been concerning. This week alone, six UK asset managers have suspended redemptions from their UK property funds, whilst the John Lewis weekly store sales growth slowed in the week following of the Referendum. The YouGov/Center for Economic Business Research daily macro tracking survey shows significant weakness in both consumer and business sentiment. Our concerns for GBP are two-fold: the macroeconomic impact as data for the full post Referendum period emerge and the constraints placed on the currency by virtue of the UK’s sizeable current account deficit. Financing of that deficit, which was under close scrutiny headed into the Referendum, will now be front and center for investors. We believe that the deficit will be increasingly exposed as the volatile macro and political backdrop deters foreign investment decisions (short- and long-term) into the UK.

A rate cut should come as no surprise but even a more conservative 25bps rate cut will not provide any relief for the pound and we would use any bounce as an opportunity to sell into.

Elliot Wave-based technical analysis suggests that there is further downside for GBPUSD. GBPUSD started a 5- wave structure from its 2.1072 peak in November 2007 and is currently in the 5 wave.

Downside momentum appears particularly as this 5 wave is currently within a sub iii wave(green) within a 3 wave(red). Assuming we are correct with the 1 wave completing at the 1.9338 low in January 2008, then  the 5 wave should complete near 1.24,  a multiple of the length of the 1 wave.

There is an area of consolidation around 1.2500, so we could expect some support here. 1.25 is also the bottom end of the range for our year-end target and the Elliot Wave-derived target as described above.

We examined  EURGBP  last week and still expect resistance around the  0.88 level,  which was the 2013 high and close to the 61.8% retracement level of the downtrend since 2009. 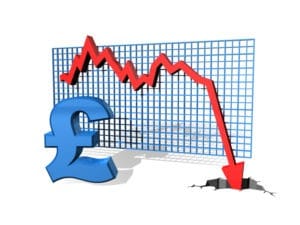 USD/JPY tops 102 on hopes for Abenomics 2

GBP/USD  fell for a third week in a row but there may be more in the pipeline, all because of Brexit. Here are three opinions about the prospects for cable: Here is their view, courtesy of eFXnews: 'Wishful Thinking' Ideas Won't Save GBP; En-Route To 1.22 - Credit Suisse In the week that has followed, the rate of decline in  both pairs puts us well on course to meet these targets. In the case of GBP, BoE Chief Carney has gone out of his way to both warn of the bleak outlook for the UK economy and to assure markets…