Home » Litecoin Price Prediction: Following Bitcoin, both for the good and bad

Litecoin Price Prediction: Following Bitcoin, both for the good and bad

Litecoin has been one of the best performing cryptocurrencies in recent weeks.

The LTC/USD pair has accumulated a 108% gain since the end of November, a time during which it has enjoyed the tailwinds that the all-powerful Bitcoin has generated.

Litecoin has been on this upward path, relying on a bullish channel that it had broken in yesterday’s upper bound.

Mid-session Bitcoin selling directly affected Litecoin, dropping sharply on Monday from the $175 price level to the $140 level, as we can see on the daily chart. 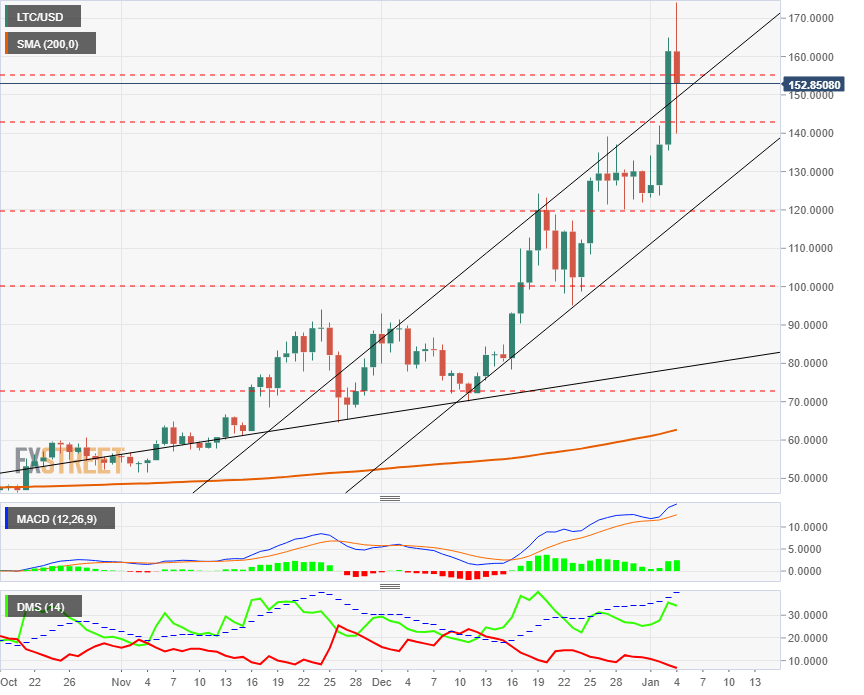 Over the last few hours, the LTC/USD has managed to regain a position above the bullish channel, where it could find support before taking a certain direction.

The sustained upward movement of the LTC/USD has its weak point in the prolonged periods of range-trading. This behaviour dramatically slows down the direction of the long-term moving averages. We can see how the 200-day moving average remains anchored at the $62.3 price level on the attached chart.

Litecoin has not broken away from this arithmetic average for all of 2019 and much of 2020. At the moment, it is not managing to pull it up fast enough.

The LTC/USD pair is currently trading at the $152.6 price level.

The MACD in the daily range shows a significant upward profile, while the separation between the lines is also favourable for the upward development of the LTC/USD price. The threats come from the dependence on Bitcoin’s behaviour and accumulated earnings, which can trigger some profit-taking.

The Directional Movement System shows bulls attempting to cross the ADX line from below without success, which is a sign of weakness in the uptrend and often leads to the price entering a short-term sideways movement. Bears move at lows not seen for several months, a factor that is conducive to the emergence of sales.

Fed’s Evans: Will likely take years to get inflation up to 2% on average

LTC/USD accumulates a 108% gain but has been weighed down by its long lateral range. The 200-day moving average, still in the $60 zone, shows there is no consolidation and Litecoin remains on the move. The LTC/USD pair leaves the current movement peak at $175, matching the 38.2% Fibonacci retracement level from the $420 all-time high. Litecoin has been one of the best performing cryptocurrencies in recent weeks. The LTC/USD pair has accumulated a 108% gain since the end of November, a time during which it has enjoyed the tailwinds that the all-powerful Bitcoin has generated. Litecoin has been on…