PancakeSwap price action in the short-term was clarified with a breakout from a minor head-and-shoulders pattern, but the bigger picture remains clouded. For now, investors are better served with a patient posture, pursuing concise tactical opportunities such as today  and allowing CAKE to determine the point of least resistance for the next major trend.

CAKE is the native token of the PanCakeSwap DeFi project built on the Binance blockchain due to the better fee structure and quicker transaction speeds than  the Ethereum blockchain.

PancakeSwap price rallied almost 380% from March 15 into the April 30 high due to developers shifting to Binance’s platform and the explosive growth in the popularity of DeFi services. Moreover, the surge in altcoins over that period spread to the DeFi-linked token.

The frenetic rally in March and April quickly dissolved into an 80% decline that erased the gain from March 15 and included a weekly decline of 56%. It was one of the largest weekly declines within the altcoins.

PancakeSwap price continues to recover from May’s 80% correction while oscillating a long the 50 four-hour SMA. Today’s breakout from a minor inverse head-and-shoulders pattern does not materially alter the mixed outlook for the digital asset. CAKE relative strength is suffocated  by  the broader market gyrations, putting it in the same predicament as most cryptocurrencies.

Moving forward, the measured move target of the inverse head-and-shoulders pattern is $19.82, representing a tactically significant 21% gain for CAKE from the neckline. If the target is reached, PancakeSwap price would be very close to the May 26 high at $20.09 and in an area of price congestion from May 21 and 22. It would require a notable surge in buying pressure to overcome the PancakeSwap price resistance that has been absent for most of the last six days.

A return of interest in the crypto market, combined with a Bitcoin breakout from the  symmetrical pattern, could lift PancakeSwap price to the 38.2% Fibonacci retracement of the May correction at $22.67. 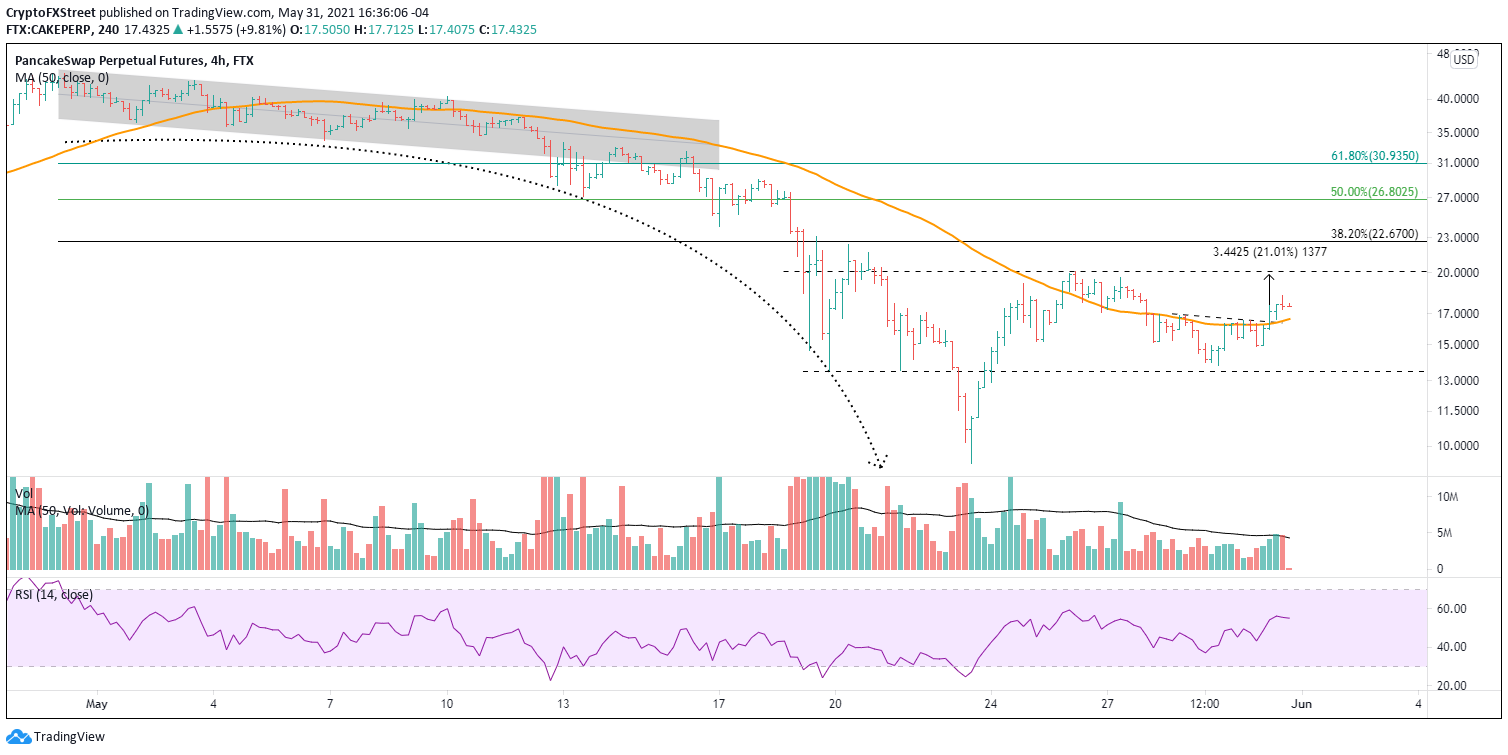 The DeFi craze catapulted several altcoins into new highs with historic gains. Still, the collective collapse of all tokens in May discarded the idea that the prosperous fundamental story of any one cryptocurrency could outrun a widespread sell-off. Despite the promising outlook, CAKE remains  a high-risk investment that will always be liquidated first in moments of financial market dislocation.

PancakeSwap price released from a minor inverse head-and-shoulders pattern earlier today. CAKE 50 four-hour simple moving average (SMA) has been involved in the price action since May 25. Current bottoming process is similar to other cryptocurrencies, indicating no relative strength. PancakeSwap price action in the short-term was clarified with a breakout from a minor head-and-shoulders pattern, but the bigger picture remains clouded. For now, investors are better served with a patient posture, pursuing concise tactical opportunities such as today  and allowing CAKE to determine the point of least resistance for the next major trend. PancakeSwap price predictions tempered after 80%…