Home » Ripple is fed up with the US regulatory repressions; XRP goes to the South

Ripple is fed up with the US regulatory repressions; XRP goes to the South

The California-based fintech startup Ripple seems to be exhausted by the US authorities’ strict regulatory requirements.

In the recent speech during LA Blockchain Summit on October 6, Ripple’s co-founder Chris Larsen hinted that the company might move from the United States to a jurisdiction with a more favorable regulatory environment. He mentioned the UK, Switzerland, Singapore, or Japan as a possible new destination for the company.

Larsen emphasized that Ripple was frustrated with the unfriendly attitude and the lack of regulatory clarity for blockchain and cryptocurrency-related business in the United States. The harsh restrictions and constant punitive measures towards the cryptocurrency projects push the US behind the rest of the world regarding the inevitable digital innovations in the financial area.

The message is blockchain, and digital currencies are not welcome in the US […] You want to be in this business, you probably should be going somewhere else. To be honest with you, we’re even looking at relocating our headquarters to a much more friendly jurisdiction.

At this stage, the company considers moving its headquarters from the US. However, at some point, the company may leave the country entirely, meaning that it won’t offer services t the US-based citizens and companies.

The head of the company Brad Garlinghouse added that the company doesn’t want to avoid regulations; it wants clarity.

Ripple’s spat with the US regulators

In 2018 Ripple’s investor Vladi Zakinov filed a lawsuit against the company alleging the XRP token is a security under California law. In February 2020, the federal court denied a motion by Ripple to dismiss a lawsuit. Investors disappointed by XRP’s price momentum, insist that the company actually sold unregistered securities. Now they want their money back.

Ripple is not the only one

The fintech startup behind XRP is not the only victim of the US regulatory wheels. Recently, the FXStreet reported that the Securities and Exchange Commission (SEC) won a landmark securities lawsuit against Kik Iinteractive Inc. The SEC alleged that the team raised $100 million in 2017 via illegal securities sale.

SALT Blockchain will also have to return funds to the investors its ICO and pay the penalty in the amount of $250,000. These are the most recent SEC’s cases against blockchain projects that carried out ICOs in 2017 and 2018.

The Commodity Futures Trading Commission (CFTC) and the Department of Justice (DOJ) came after the largest cryptocurrency derivatives platform BitMex and its top management. They are accused of violating Bank Secrecy Law and failing to prevent money laundering. Notably, the company is registered outside the US, by the regulators claim that it has been offering the US citizens illicit derivative instruments, and thus has to be punished.

Read our comprehensive report on what happened with BitMex and what it means for the industry.

XRP is the fourth largest digital asset with the current market value of $11 billion and an average daily trading volume of $2.6 billion. At the time of writing, XRP/USD is changing hands at $0.245, down nearly 4% on a day-to-day basis. The asset’s price is moving in sync with the market.

From the technical point of view, XRP/USD has reversed from the resistance line on the approach to $0.26, limiting the price recovery since the beginning of September.

A failure to clear the barrier implies that XRP may continue the sell-off with the initial target created by $0.227. This barrier served as resistance back in May and has been verified as support on numerous occasions in September.  Currently, it is also reinforced by the upside trendline from March 16 low.  Once it is out of the way, the downside momentum is likely to gain traction with the next focus on the psychological barrier of $0.2 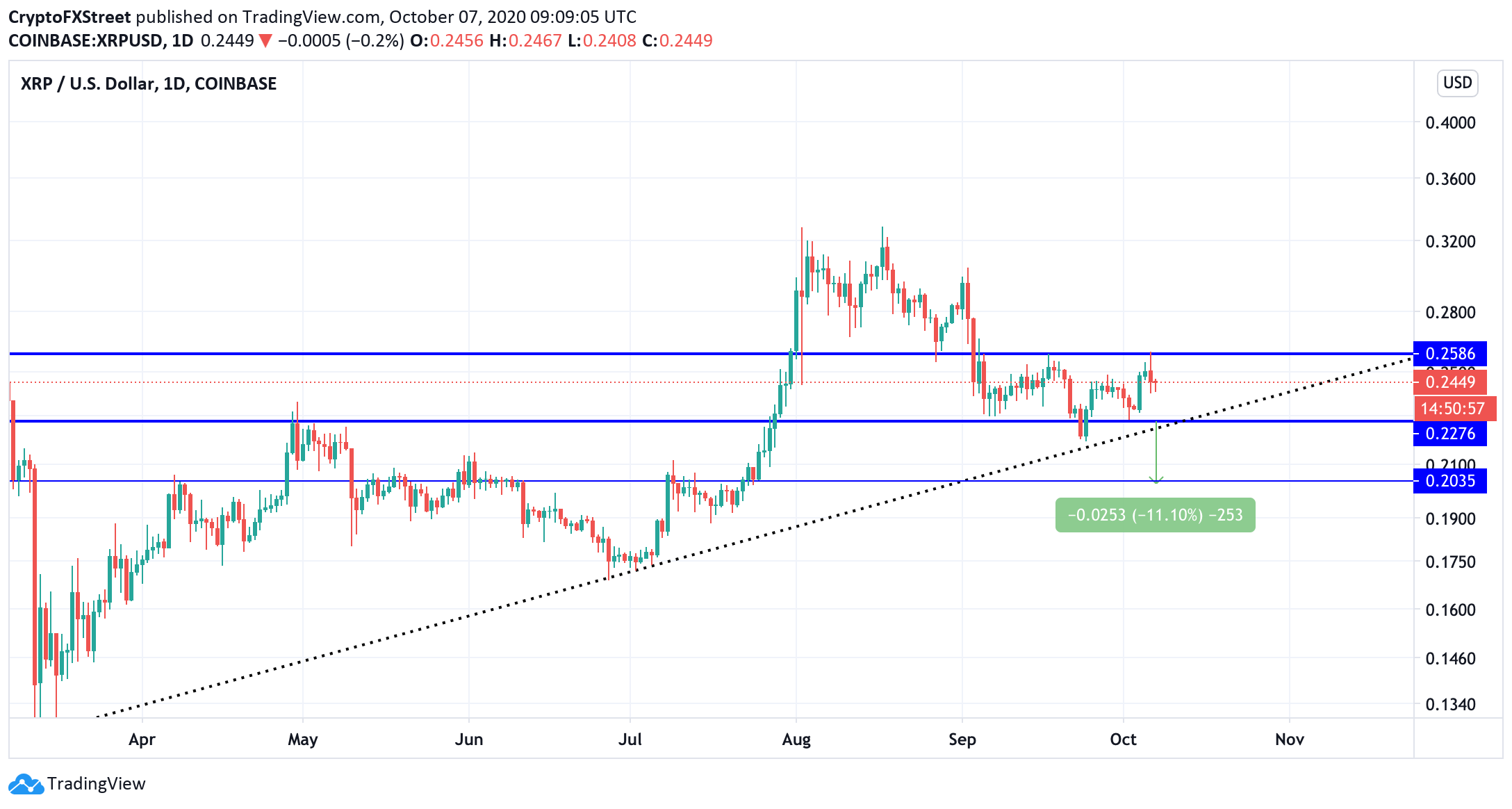 If the support holds, XRP/USD will recover to retest the above-mentioned resistance of $0.26.  A sustainable move above this area is needed for the upside to gain traction with the initial target at the previous recovery high of $0.3. Once it is cleared, the price will move towards the double top of August 2 and August 17 at $0.328.

Ripple may relocate from the US to a country with a more friendly cryptocurrency regulation. XRP/USD reversed from the support area, ready to extend the downside correction. The California-based fintech startup Ripple seems to be exhausted by the US authorities' strict regulatory requirements.  In the recent speech during LA Blockchain Summit on October 6, Ripple's co-founder Chris Larsen hinted that the company might move from the United States to a jurisdiction with a more favorable regulatory environment. He mentioned the UK, Switzerland, Singapore, or Japan as a possible new destination for the company. Larsen emphasized that Ripple was frustrated with…