The SushiSwap saga took an unexpected turn this Friday as founder Chef Nomi returned 14M ETH to the community.

A small recap of what happened

Yearn.Finance was the first DeFi (decentralized finance) protocol to introduce fair launch in liquidity mining. Anyone could earn the native YFI tokens by locking up capital into Yearn. This open and community-first mindset not only jumped YFI’s market cap from 0 to a billion dollars in six weeks but also spawned a series of impersonators like Yam.Finance, Ham.Finance and Spaghetti Money. These protocols were all joke coins that allowed users to gain money via simple crash and burn mechanics.

SushiSwap joined this DeFi craze by forking the highly popular decentralized exchange (DEX) – Uniswap. Unlike other DEXs that use decentralized order books, Uniswap uses pools of liquidity for trade. This type of DEX is known as an automated market maker or AMM. in Uniswap, you could lock up your DAI and ETH tokens in a DAI/ETH pool and get back LP tokens in return. These LP tokens represent your liquidity within the protocol.

Chef Nomi added some attractive token incentives to Uniswap’s existing protocol. In Uniswap, liquidity providers received a .30% fee, while SwushiSwap would pay .25% to liquidity providers and convert the remaining 0.05% into rewards for SUSHI holders. Along with this, 10% of the Sushi distribution was kept aside for a development fund.

Users acquire SUSHI by staking their Uniswap LP tokens in its contract. In other words, get your tokens by removing liquidity from Uniswap. So, what effect did this happen on Uniswap? 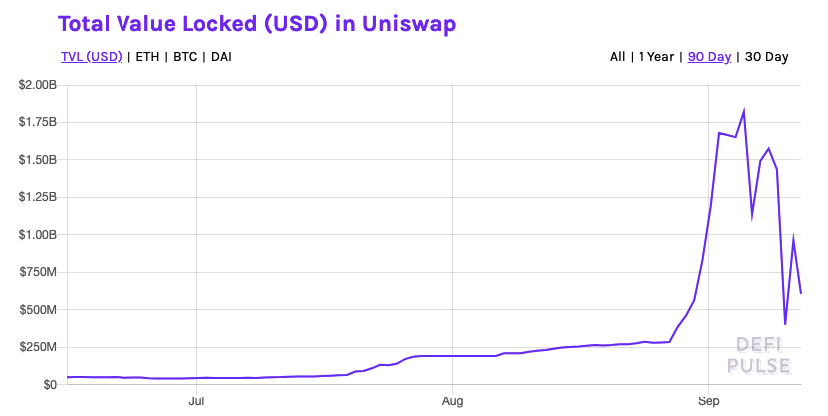 As you can see, the total value locked (TVL) in Uniswap fell dramatically over time. In just a week, the TVL fell from $1.82 billion (September 5) to $607.12 million (September 12). Now, let’s look at what happened with SushiSwap. 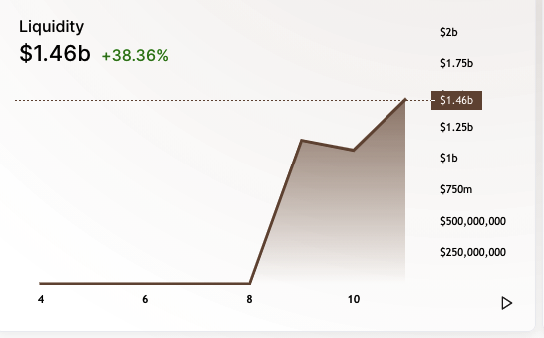 SUSHI TLV has gone up to $1.46 billion. The liquidity wars are well and truly on.

SushiSwap ended up extracting more than $800 million from Uniswap. SUSHI went up to $10 from 0 seemingly overnight and reputed exchanges like Binance started listing the token. This was when Chef Nomi tried to pull his heist. He was in sole control of the development fund. He sold $14 million of it for ETH. He claimed to be doing this for the “good of the community.” He explained that by dumping his SUSHI, the price would no longer be a distraction and he could focus solely on development. Obviously, this sparked outrage throughout the community and plummeted SUSHI by 70%.

FTX steps in to save the day

FTX was one of the exchanges that actually listed the SUSHI token. CEO Sam Bankman-Fried took over control when Chef Nomi transferred the admin keys over to him. Bankman-Fried then put the keys into a multi-sig contract to make sure that no one person could have full control over the funds.

SUSHI holders then held an election to determine who all would be in charge of the keys along with Bankman-Fried. The people chosen were – Compound Finance founder Robert Leschner, The Block’s Larry Cermak, and CMS Holdings.

Finally, after all this, Chef Nomi took to twitter and admitted that he “f*cked up.” Nomi returned $14 million to the treasury.

SUSHI/USDT jumped up from 2.143 to 2.879 in just five hours. At this point, the hourly price jumped above the 20-day Bollinger and the RSI kissed the edge of the overbought zone. This prompted the bears to step in and drop the price down to 2.698. The buyers then tried to take the price up again but have since been thwarted at the 2.787 and 2.698 resistance lines.

SUSHI founder Chef Nomi returned 14 million ETH to the treasury after admitting his mistake. SushiSwap has siphoned away over $800 million liquidity from Uniswap. The SushiSwap saga took an unexpected turn this Friday as founder Chef Nomi returned 14M ETH to the community.  Over the day, the price jumped by 16.5% from $2.36 to $2.73. A small recap of what happened Yearn.Finance was the first DeFi (decentralized finance) protocol to introduce fair launch in liquidity mining. Anyone could earn the native YFI tokens by locking up capital into Yearn. This open and community-first mindset not only jumped YFI’s market…