Latest
You are at:Home»Forex News»The pound will need strong data to recover, not sure it will find it

The GBP/USD is trading some 0.20% down on the day around $1.4050. The US Dollar is on a roll across the board, thanks to a strong GDP reading in the US on Wednesday and a greenback comeback after the losses it suffered beforehand. The US economy grew by an annualized clip of 2.9% in Q4 2017 according to the final read, and 2.3% YoY. This was better than an annualized figure of 2.7% that was expected.

The British Pound received its final GDP publication as well, and there were no surprises. The economy grew by 0.4% QoQ and 1.4% YoY in the final release for the last quarter of the previous year. This met early projections and did not help the Pound. Other figures released simultaneously beat early forecasts. Britain’s Current Account deficit came out at £18.443 billion, lower than a shortage of £24.000 billion that had been predicted for Q4. The BOE’s Consumer Credit measure rose by £1.647 billion, also ahead of estimates that stood at £1.4 billion. Mortage approvals were mixed.

Later today, the US releases a big bulk of economic indicators, with the Core PCE Price Index standing out as the main event. It is the Fed’s favorite inflation gauge. A repeat of 1.5% YoY is on the cards. Also, Personal Income, Personal Spending, and weekly Unemployment Claims are also due.

Markets are more volatile than usual as the week, month, quarter, and Japan’s Fiscal Year all draw to a close. Portfolio managers are required to maintain the ratios of their assets intact and movements during the Q1 2018 may need adjustments. These last-minute moves may explain the elevated volatility.

Later on, things are set to slow down. Most of the world is on holiday on Good Friday. The long Easter weekend precedes a busy start to April. 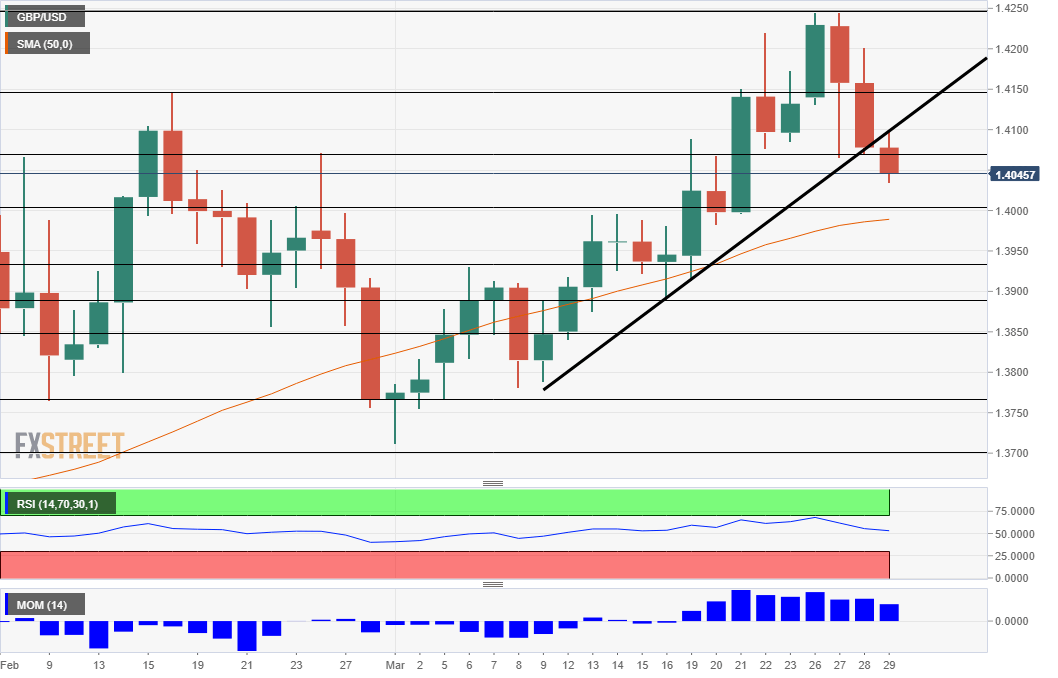 As the thick black line on the chart shows, the GBP/USD broke below the steep uptrend support line that had accompanied it since March 9th. The RSI which was nearing overbought territory earlier in the week is now gliding towards balance, standing just above 50. However, Momentum remains positive.

Looking up, the February 26th high of $1.4070 is a weak line of resistance that almost coincides with the broken uptrend support line, coming out at the round level of $1.4100. Further above, the February 16th peak of $1.4150 awaits.