Bitcoin is probably the best native currency of the internet, Twitter CEO

In a recent interview with Reuters, Jack Dorsey, the CEO of Twitter and Square, said that Bitcoin is “probably the best” native currency of the Internet as it is consensus-driven and “built by everyone.”

The interview comes shortly after Dorsey’s Square invited other cryptocurrency companies to join an “‘alliance” that will pool patents and preserve its open-source spirit. The group is called “Cryptocurrency Open Patent Alliance” (COPA).

With many major firms filing and holding many patents, the number of US cryptocurrency and blockchain-related patents have doubled between 2016 and 2017. Regardless of whether it has patents or not, any digital asset company will be eligible to join COPA.

Dorsey has endorsed Bitcoin several times in the past few years. Earlier, he had also claimed that the coin could become the world’s sole currency by 2030. In the recent interview with Reuters, Dorsey said:

I think the internet wants a native currency and I think bitcoin is probably the best manifestation of that so far.

However, Dorsey thinks that there is still work to be done before Bitcoin and other cryptocurrencies achieve mainstream adoption. According to him, “transaction times and efficiency” and ease of use need improvement.

We have to build bitcoin in such a way that it as intuitive, it’s as fast and it’s efficient as what exists today and goes beyond that too.

The open interest of Bitcoin is surging again, pointing to a potentially large price movement soon. The rise in BTC’s recent price volatility coincides with the imminent expiration of 77,000 BTC options contracts. Deribit data reveals that the BTC options open interest is hovering at around 134,000 contracts, indicating that a surge in volatility in October is becoming more likely.

Whether this expected volatility will lead to a Bitcoin rejection or cause the bull market to resume remains unclear. If the flagship coin follows the previous post-halving cycle, it will likely achieve a new all-time high 15 months after the recent halving (mid-2021).

As the accumulation phase continues, BTC could remain in the $9000-$12,000 range in the near term. Once the September expiration occurs (occurs on the last Friday of every month), Bitcoin is likely to move in a particular direction. For now, the continuous rejection of $12,000 and $11,100 makes a longer consolidation phase probable.

A few traders believe that the recent Bitcoin rejection was a take-profit pullback. Technical analysts are anticipating a minor price drop in the near term. A pseudonymous trader is known as “Byzantine General” took to Twitter to share their thoughts. 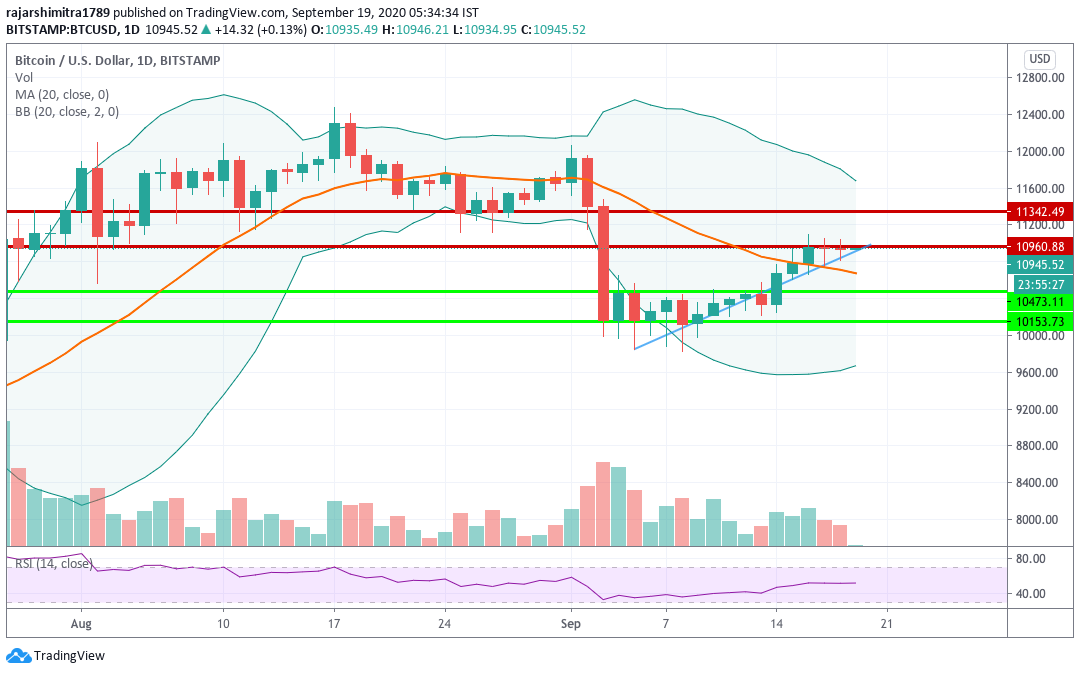 BTC is consolidating in an ascending triangle pattern and is currently testing the $10,960 resistance line. The 20-day Bollinger jaw is constricting, which shows decreasing price volatility. Over the last three days, the bulls and bears have canceled each other out, so the RSI is hovering around the neutral zone. To understand BTC’s price movement, let’s check out the IOMAP.

BTC is sitting on top of a robust supply wall, so downside potential is limited. On the upside, the bulls have the space to move the price up to $11,600, before it meets a strong resistance level.

As per Santiment, there is a massive spike in the age consumed metric on 16th September. Usually, a spike results in a sudden price movement (could be either positive or negative). However, going by the IOMAP, we can guess that the movement is going to be positive.

Over the last 10 days, there has been a sharp drop in on-chain development activity. This is usually a bearish sign. However, Bitcoin isn’t as dependent on on-chain activity as Ethereum.

The number of pending transactions on Ethereum surged shortly after the Uniswap exchange announced its UNI token launch. The decentralized exchange revealed that it launched the UNI governance token, with one billion coins distributed over the next four years.

Uniswap permitted historical users of the protocol and its liquidity providers to claim 400 UNI tokens per each address used. An excerpt from Uniswap’s announcement reads:

As users started to claim their tokens, the number of pending transactions on Ethereum per minute surged from around 160,000 to over 210,000.

As per Etherscan, the UNI token distribution address saw users pay $1.4 million in ETH as gas fees when transacting to it. This accounted for more than 8% of the gas used in the last 24-hour period. 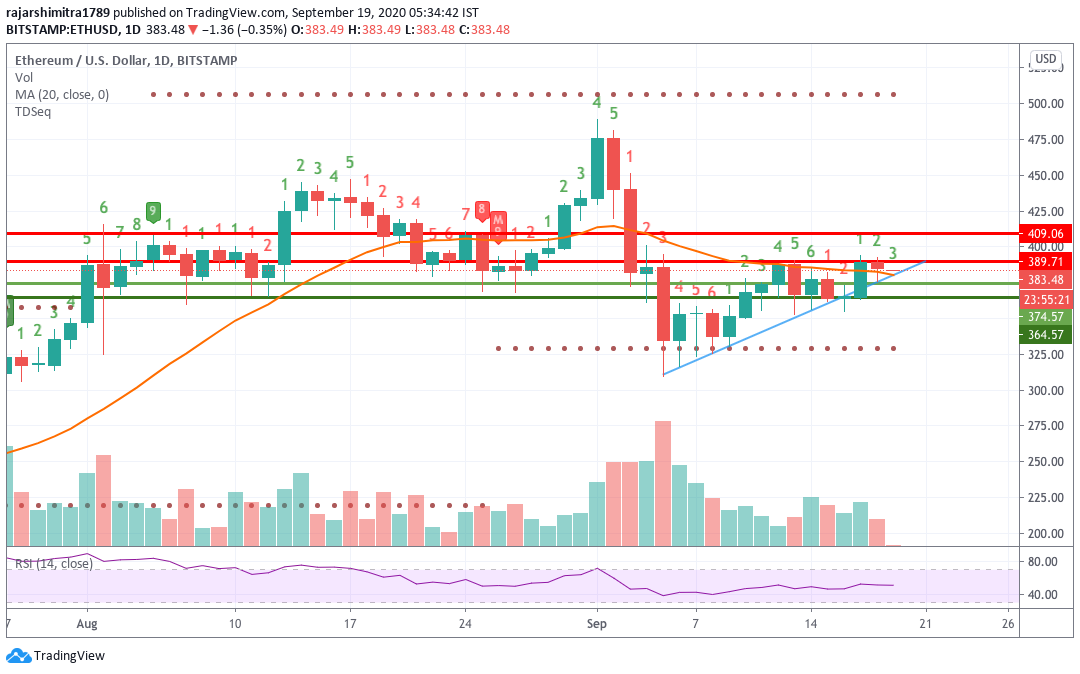 ETH is also consolidating in an ascending triangle formation. After encountering resistance at the $390 line, the price has gone down slightly over the last two days. However, despite the bearish movement, the TD sequential tells us that we are in the early stages of an upward trend. If the bulls carry their momentum, they should break past the $390 resistance line and go all the way up to the $410 resistance line.

Ethereum’s IOMAP shows a lack of substantial resistance levels upfront, so there is tremendous upside potential. On the downside, it is sitting on top of a strong supply wall, so downward movement is limited.

Over the last three months, the number of new addresses has pretty much remained consistent. This is a good sign.

Ethereum’s token velocity has drastically decreased mainly because of Uniswap. Investors have locked up their ether in the Uniswap contracts, which has reduced the token velocity. This is also a bullish sign.

A well-known cryptocurrency investor who goes by the name “Crypto Bitlord” has allegedly sold all their XRP holdings. The investor claimed that the cryptocurrency is a “confirmed scam.” Ripple, the company behind XRP, is laden with many controversies. The firm presently holds more than half of the total XRP supply. This, according to most observers, is the reason why the price has been moving horizontally. Ripple has also been accused of intentionally suppressing XRP’s price.

Crypto Bitlord is popularly known for starting a petition back in 2019, asking Ripple to stop dumping on investors. In a recent tweet, they called XRP a “confirmed scam.” They explained that they realized this after watching Ripple dump on the market for several years.

XRP/USD has been trending in a bearish flag pattern and has encountered resistance at the SMA 20 curve. As of now, the price is consolidating under the $0.25-level, before it goes through a bearish breakout. If the price does break below the flag, it will probably drop down till the $0.24 support line. However, it is highly doubtful if XRP will actually go through such a sharp movement.

The age consumed metric from Santiment shows a lack of spikes. Hence, XRP is probably going to keep on moving sluggishly.