Crypto markets witnessed a major turnaround in the second half of this week, as the bulls fought back control, leading to multi-week highs in most digital coins. Among the top 50 widely-traded digital assets, UMA, Celsius and Monera emerged the top performers (in that order), with UMA having recorded about 30% weekly gain.

Let’s take a look into the technical charts of these three outperformers, in order to determine if the rally would extend into the week ahead.

UMA: A profit-taking slide in the offing

The 35th most dominant token, UMA, led the recovery sprint among the top 50 crypto coins this week, surging nearly 30% on the week. The digital asset is consolidating Friday’s upsurge to two-week highs of $13.19, now trading around $10 mark on Saturday. 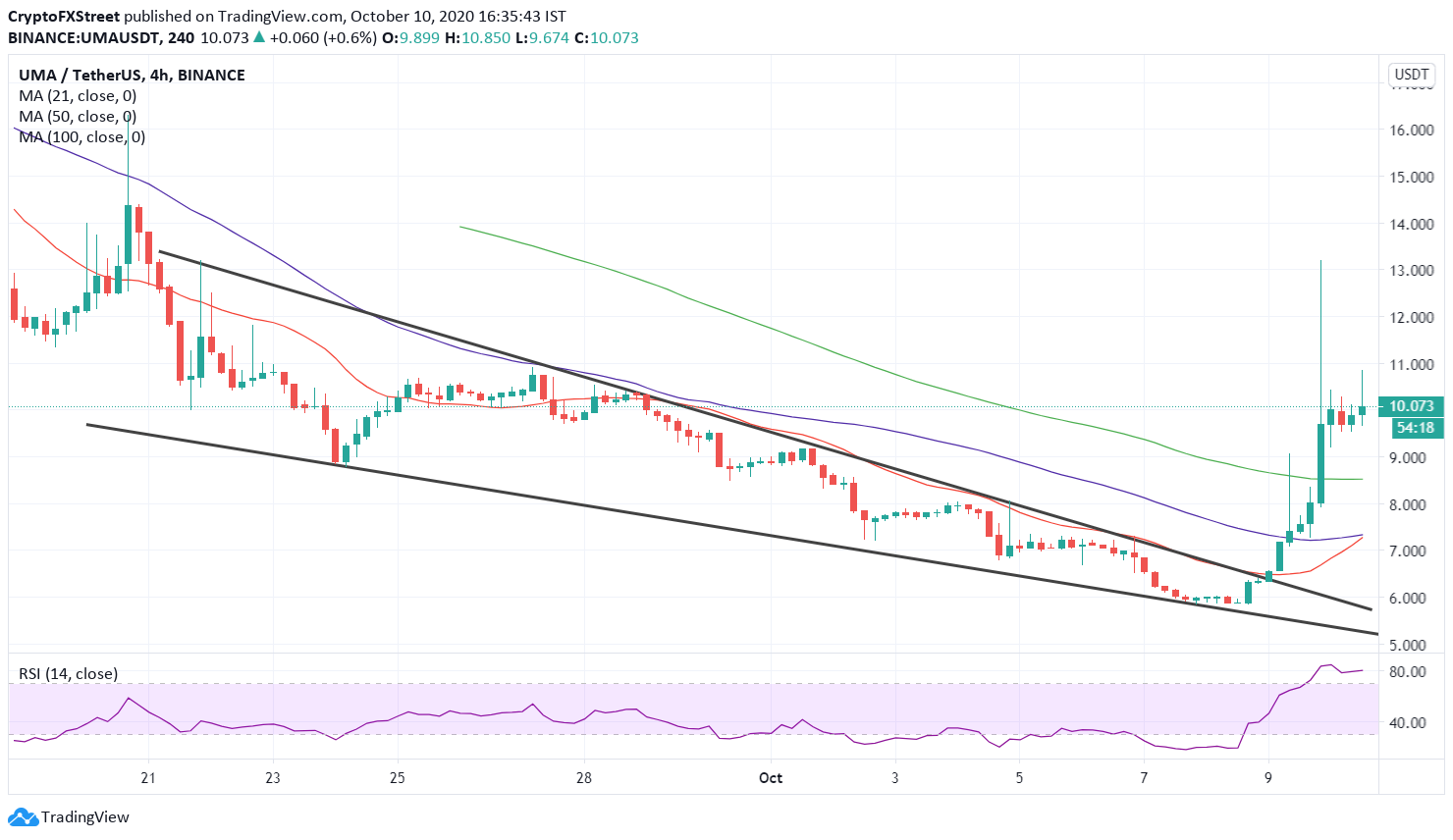 As observed in the four-hour chart, the spot confirmed a falling wedge breakout on Friday after it closed above falling trendline resistance at $6.40. The technical breakout unleashed the bulls and prompted a massive $7 rally. However, so far this Saturday, the upside momentum seems to fade, as the price remains heavily overbought, as indicated by the Relative Strength Index (RSI) at 81.08. Therefore, a sharp pullback, in the wake of profit-taking, cannot be ruled towards the horizontal 100-Simple Moving Average (SMA) at $8.52, given the scale of the explosion to the north.

Celsius: Bulls eyeing a break above $2.00

Celsius lies almost at the bottom of the top 50 favorite crypto assets but steals the show as the second-best performer of the lot, on track to book a 15.50% weekly gain. The coin remains poised to extend Thursday’s reversal, despite flashing a red candlestick on this Saturday. 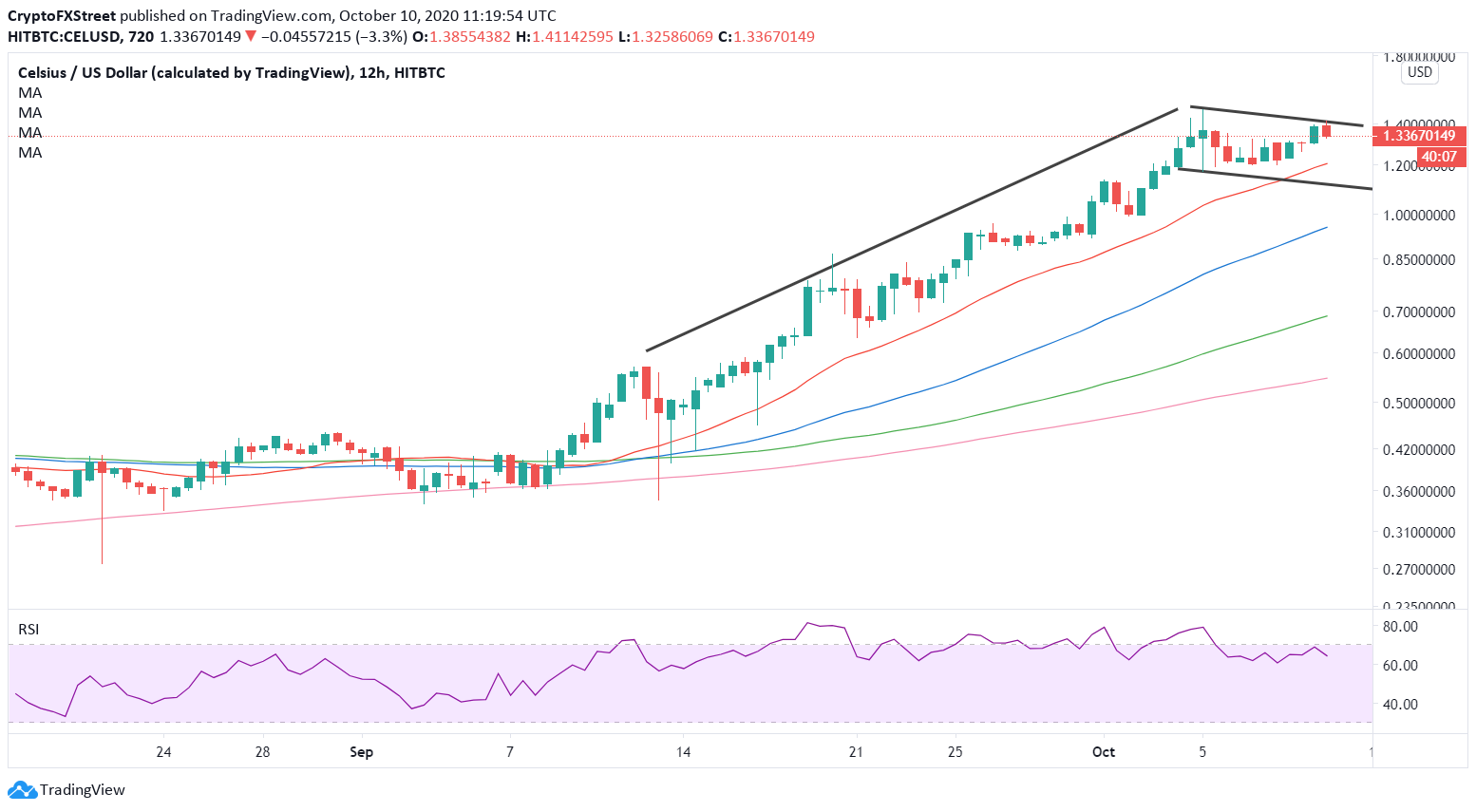 Technical set up remains in favor of the bulls, as the month-long steady rise followed by the consolidation in the past week has carved out a classic bull flag on the 12-hour chart. The RSI has taken a U-turn from within the overbought region to now pointing south, near 65.75, still allowing some room for the next leg higher. Meanwhile, the price trades above all the major SMAs on the given time horizon, adding credence to the bullish prospects.

A firm break above potential bull flag resistance at $1.4051 would validate the pattern, opening doors towards the $2.00 round figure. Any pullbacks will likely find fresh bids at upward-sloping 21-SMA at $1.2154. However, the path of least resistance appears to the upside.

Monero: Scope for a $30 rally amid a bullish breakout

Monero (XMR/USD) is set to extend its four-day winning streak, following a sharp rebound from Wednesday’s low of $102.37. The No. 15 coin almost tested the $120 level earlier on Saturday, as the bulls now take a breather before the next push higher. The coin is up 1.12% on a daily basis but gains 14.50% over the week.

From a near-term technical perspective, a rounding bottom pattern got confirmed on the daily chart Friday, calling for a test of the pattern target measured at $149 over the next couple of months. The 14-day RSI sits at 67.90, heading towards the overbought territory. On the flip side, the bullish 21-daily moving average (DMA) at 101.49 will cushion the downside. Note that the price recaptured all the major DMAs.

Cardano Price Prediction: 100-DMA is the level to beat for the ADA bulls

UMA consolidates the spike to $13.19, up nearly 30% on weekly basis. Celsius adds over 15% on the week, set for additional upside. The rounding bottom breakout in Monera opens door to heaven. Crypto markets witnessed a major turnaround in the second half of this week, as the bulls fought back control, leading to multi-week highs in most digital coins. Among the top 50 widely-traded digital assets, UMA, Celsius and Monera emerged the top performers (in that order), with UMA having recorded about 30% weekly gain. Let’s take a look into the technical charts of these three outperformers, in order…