The first round of the French Presidential elections  is held on Sunday, April 23rd, and the stakes are very high. Opinion  polls in the past week have been  showing an open  4-way race. Any two of the four leaders can make it into the second round.

Here is some background towards the highly anticipated race, followed by four scenarios. Each scenario is accompanied by its probability and expected impact on the euro with EUR/USD targets.

Not your usual French elections

France holds two rounds of Presidential Elections.  11 candidates are vying for support in the first round on April 23rd. The top two will meet each other in the run-off on May 7th.

This presidential campaign is different than in previous years. The outgoing President, FranÃ§Ã­os Hollande of the center-left Socialists,  decided not to run for a second term, an unprecedented decision. His former economy minister Emmanuel Macron split from the party and  announced his own candidacy.

The mess within the ranks of the Socialists was supposed to hand in the elections to the center-right Les Republicans. Any candidate was expected to reach the second round against extreme-right Marine Le Pen and handily win.  However,  FranÃ§ios Fillon, a former Prime  Minister, and the candidate was  embroiled in scandals and refused to quit.

So, there is good chance that neither of the parties that ruled France will have a candidate in the second round.

Here are the candidates, ordered by the recent opinion polls.

As you can see, the polls show a very close race, with the gaps between the candidates around the margin of error. In addition, the number of undecideds is very high.

This is the baseline scenario that has been dominant for  many weeks since Fillon got in trouble. Polls show that these very different candidates lead the polls.  In the second round,  Le Pen is unlikely to significantly increase her support beyond her base and voters of the moderate left and right will coalesce around Macron. Polls show him winning by margins of around 25%, something that is way beyond the margin of error.

Polls show him winning her by margins of around 25% in the second round, something that is way beyond the margin of error and insurmountable.

Probability: Medium-high. This scenario has the highest chances, but the race is very close.

Euro-reaction:  Positive. Markets will begin pricing in Emmanuel Macron in the Elysee Palace and the euro could rise towards 1.10.

This scenario used to be the  baseline until February. Fillon is still expected to beat Le Pen in the second round but the margin that polls show is smaller, around 15%. With the amount of undecideds and a general disgust from Fillon, voters could stay at home. Extreme-left voters  could prefer Le Pen over the establishment candidate Fillon, similar to events in the UK and the US.

Probability: Medium. This scenario is second in line, but a very close second.

Euro-reaction: Negative. The aforementioned fears could leave the euro shaky, as markets  will not be 100% sure that a market-friendly candidate will indeed win. A challenge of the 14-year low at 1.0340 could be on the cards.

This is the new nightmare scenario. Both candidates are seen as destructive: Le Pen to the EU and integration, and Melenchon to opening the rigid French economy. Markets will not know who to cheer in the second round, even if Le Pen seems more  disruptive to the wider European Union. There are not many opinion polls putting these extreme candidates against each other.

Probability: Low. Melenchon is still in the back of the pack.

Euro-reaction: Very negative. Between a Melenchon-induced recession and a destructive Le Pen, the euro could plunge towards parity and below quite quickly.

4) Le Pen fails in the first round

If Le Pen fails and two other candidates surpass her, it will be a huge surprise. It was always seen as a race to beat Le Pen in the second round, counting her as a shoe-in for May 7th.

Macron vs. Fillon would be the most market-friendly sub-scenario, but also Melenchon against one of those centrists will be good enough for  markets.  Either Macron or Fillon are expected to easily beat Melenchon.

Euro-reaction: Very positive.  Eliminating the candidate that wants to leave the EU  already in the first round will be a huge relief. EUR/USD could leap to 1.12 or 1.15.

This is a very important event for the euro – the most important election in 2017, after 2016’s big shocks: Brexit and Trump’s victory.  EUR/USD is reflecting the high tension and looks like a coil set to spring out. 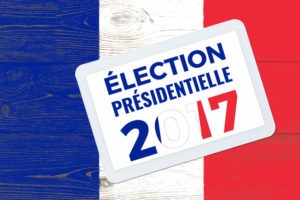 The first round of the French Presidential elections  is held on Sunday, April 23rd, and the stakes are very high. Opinion  polls in the past week have been  showing an open  4-way race. Any two of the four leaders can make it into the second round. Here is some background towards the highly anticipated race, followed by four scenarios. Each scenario is accompanied by its probability and expected impact on the euro with EUR/USD targets. Updates French exit polls: Macron wins first round 23.7%, Le Pen 21.7% - EUR/USD should rise EUR/USD at 5-month high despite real results showing Le…