The Bank of Canada maintained interest rates at 0.25% for a third successive month, as expected. Policymakers noted that financial conditions have started to improve, as the country is slowly recovering from the Covid-19 outbreak. This was the first policy meeting under new BOC Governor Tiff Macklem, who replaces Stephen Poloz.
Canada’s trade deficit jumped to C$3.3 billion in April, up from C$ 1.4 billion beforehand. It was the highest deficit recorded since January 2019. The economy added 289.6 thousand jobs in May, after shedding 1.99 million a month earlier. Analysts had predicted a loss of 500 thousand jobs. The unemployment rate climbed to 13.7%, up from 13% beforehand. Still, this was better than the estimate of 15.0 percent. Elsewhere, Ivey PMI improved to 39.1, up from 22.8 and beating the forecast of 30.8 points.
In the U.S., ISM Manufacturing PMI improved to 43.1, up from 41.1 beforehand. The PMI has now pointed to contraction for three straight months, as the manufacturing sector has been hit hard by the economic crisis. The services sector also finds itself in contraction territory, as the ISM Non-Manufacturing PMI came in at 45.4 in May within expectations. Nonfarm payrolls shocked with a huge gain of 2.5 million in May, defying the estimate of -7.7 million. In April, the economy shed a staggering 20.5 million jobs. The unemployment rate fell to 13.3%, down from 14.7% beforehand. The forecast stood at 19.4 percent.
USD/CAD daily chart with support and resistance lines on it. Click to enlarge: 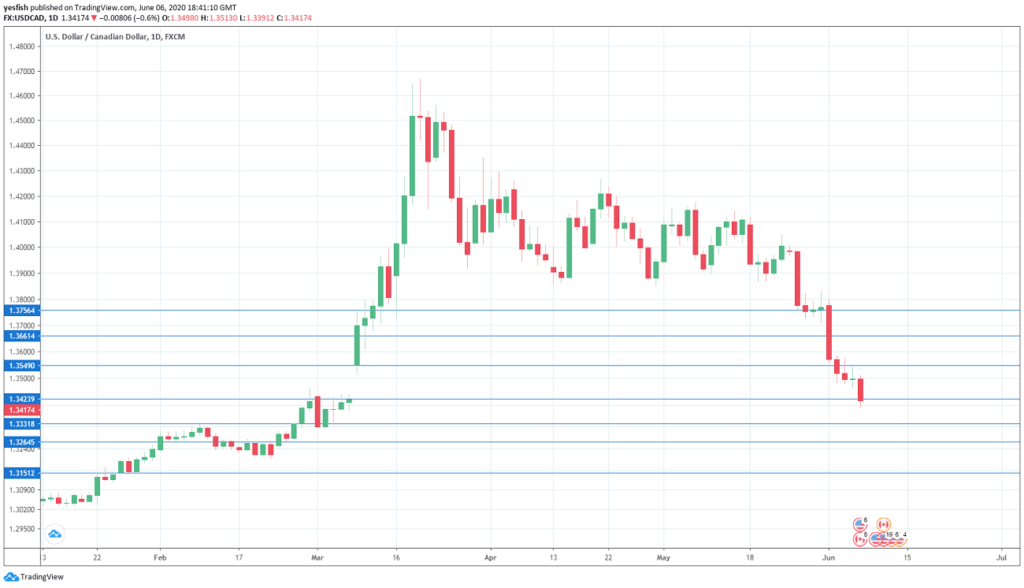 With USD/CAD recording sharp losses, we start at lower levels:

1.3757 switched to resistance early in the week.

1.3550 had been in a support role since early March, but switched to resistance after strong gains by USD/CAD last week.

The outlook for the Canadian economy is not rosy, but the Canadian dollar has showed surprising resilience, with gains of 4.5% since April 1. Last week’s employment numbers were strong on both sides of the border, a sign that both the U.S. and Canada are seeing stronger economic conditions.

OPEC+ agrees to extend oil output cuts by one month, until end-July

The Canadian dollar climbed 2.5% last week, as USD/CAD  fell to its lowest level since early March. There are three releases in the upcoming week, all of minor significance. Here is an outlook at the highlights and an updated technical analysis for USD/CAD. The Bank of Canada maintained interest rates at 0.25% for a third successive month, as expected. Policymakers noted that financial conditions have started to improve, as the country is slowly recovering from the Covid-19 outbreak. This was the first policy meeting under new BOC Governor Tiff Macklem, who replaces Stephen Poloz. Canada's trade deficit jumped to C$3.3…

Gold Weekly Forecast: Bulls Emerging Ahead of NFP, Barred by $1,800

Gold Weekly Forecast: Sellers to Dominate Under 1775, Awaits US Data

Gold Weekly Forecast: Bears Taking Breather at $1,750 Ahead of FOMC