The weekly forecast for the USD/CHF pair is neutral and may keep wobbling in the range between 0.9100 – 0.9200. However, a technical bearish trend can be seen too.

The USD/CHF pair remains broadly in a neutral tone around the mid-0.9100 area as the week ended. The CHF is benefitting from the general weakness of the US dollar. However, if another surge in the Delta variant is seen in Switzerland, it may dampen the CHF across the board. Swiss authorities have reiterated that they will not curb public life even if the infection cases rise further. In the absence of any key data event, the risk jitters and Greenback performance will be the key to lead the price action in the USD/CHF.

The USD/CHF pair started the week above the 0.9100 mark and hit the highs just under 0.9200. However, the pair maintains the neutral tone and looking for a catalyst to trigger directional momentum on either side.

US ADP and NFP reports

The most important event of the week was the employment report of the United Stated. On Wednesday, the ADP employment report released widely missed the expectations of 640k jobs against the current reading of 374k.

On Friday, the US nonfarm employment number also came too worse than expected. Only 235k jobs were added in August, while the expected figure was 750k. However, the unemployment rate reduced to 5.2%, and average hourly wages increased by 0.6%.

The US dollar had already been under pressure throughout the week, but the dismal US NFP report weighed further and helped the major currencies sharply rise. The USD/CHF pair broke an important level of 0.9140 but managed to pare off the losses.

Since the start of the pandemic, the number of new infections in Switzerland and Liechtenstein has risen again to over 780,000. As a result, more than 10,500 people have died.

Last week, Alain Bersay, Switzerland’s health minister, said that just over half of the adult population is fully vaccinated, but over a third is not. Moreover, compared to neighboring countries, vaccination rates are lower.

As well as CHF 60 million ($ 65.5 million), the Swiss government has committed to boost tourism demand and encourage innovation.

State support for Corona is expected to amount to 17 billion francs in 2021, about the same as in 2020. In response, the funding gap in the public sector has been pushed up to roughly 2.2%.

Key events from Switzerland during Sep 06 – 10

The economic calendar is too light for the week ahead. There are only two events to follow, but both are non-significant to trigger any volatility. First, the unemployment rate is expected to improve slightly and may come at 2.9% from the previous reading of 3.0%. Second, foreign currency reserves data may not bother CHF traders at all.

The important events include the JOLTS job opening due on Wednesday ahead of Fed William’s speech in the US. Moreover, weekly unemployment claims are also important to note. Other than that, US PPI m/m data may also trigger volatility due on Friday. The figure is expected to slide to 0.6% against the previous month reading at 1.0%.

The USD/CHF price is wobbling within the highs and lows of the August 27 widespread down bar. On Friday, September 03, the price closed in the middle of the down bar while the volume is too high. The price is now caught between 20 and 100 daily moving averages. Meanwhile, the 200-day moving average at 0.9075 is flat that may attract the price towards it. Hence, the likelihood of breaking the 0.9100 level is quite high in a given scenario. On the upside, the pair will remain neutral to bearish under 0.9200 resistance.

Read Review
Open My Free Account
Your capital is at risk.
USD/CHF Forecast 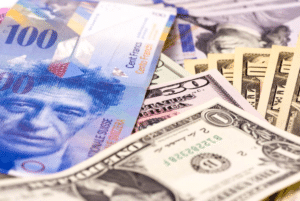 USD/CHF slipped after poor US ADP and NFP reports last week.  Delta variant scenario in Switzerland may weigh on the CHF.  Technically, the pair is neutral, caught between 20 and 100 DMAs.  The weekly forecast for the USD/CHF pair is neutral and may keep wobbling in the range between 0.9100 – 0.9200. However, a technical bearish trend can be seen too. The USD/CHF pair remains broadly in a neutral tone around the mid-0.9100 area as the week ended. The CHF is benefitting from the general weakness of the US dollar. However, if another surge in the Delta variant is seen…