USD/CAD fell to low support but couldn’t break through. It eventually moved back up. GDP is the main event this week. Here is an outlook on the major market-movers and an updated technical analysis for USD/CAD.

Canada disappointed with weak retail sales: both the headline and the core numbers fell by 0.4%, while rises were expected. The governor of the BOC, Mark Carney, was bullish in comparison to other central bankers, but less hawkish than his usual tone. All in all, the loonie was unable to enjoy what seemed to be a hint of more money printing in the US. Will the C$ continue to weaken?

Updates: Corporate Profits, released  quarterly, will be  published later on Tuesday. The markets are hoping for an improvement from the Q1 figures of a negligible 0.1% gain. The loonie continues to look sharp, and is testing the 0.99 line. USD/CAD was trading at 0.9889. Corporate Profits disappointed, plunging 4.9% in Q2. This was the indicator’s   weakest reading since last Q2 of 2011. Two manufacturing indexes, RMPI and IPPI, will be released later on Wednesday. The loonie has edged lower, as USD/CAD was trading just below the  0.99 line, at 0.9890. RMPI disappointed as it gained 0.9%, well below the market estimate of 2.1%. IPPI contracted for the second straight month, dropping by 0.5%. The markets had forecast a 0.3% gain. Current Account, a quarterly release,  will be released later on Thursday. The markets are bracing for a sharp drop from Q1. The loonie continued to edge downwards, as USD/CAD rose above the 0.99 line. The pair was trading at 0.9913. 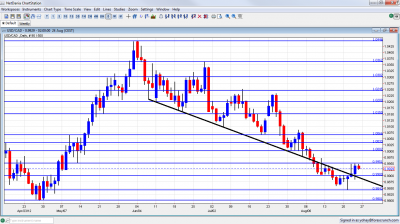 $/C$ began the week under the 0.99 line (mentioned last week). It then pushed even lower and bottomed out perfectly well at the 0.9840 line. From there, it was uphill with the 0.9950 line working as resistance.

1.0150 was a swing low in September and worked as resistance several times afterwards. It was challenged in June 2012. and served as a separator in July 2012.

1.0066 was key support before parity. It’s strength during July 2012 was clearly seen and it gave a fight before surrendering. Now, it is somewhat weaker. 1.0030 is another line of defense before parity after capping the pair earlier in the year. The move below this line is not confirmed yet.

The very round number of USD/CAD parity is a clear line of course, and the battle was very clear to see at the beginning of August 2012.  Under parity, we meet another pivotal line at 0.9950. It served as a top border to range trading in March 2012 and later as a line in the middle of the range. It also worked well as resistance in August 2012, in more than one occasion.

0.99, the round number capped the pair in May 2012, later worked in both directions  in August.  The quick switch from support to resistance showed the resilience of the line, although it is somewhat weaker now. 0.9840 provided support for the pair during September and proved its strength again in August 2012, as a clear bottom.

The last line for now is 0.9550, which worked as resistance when the pair traded in low ground.

The line worked from mid May and worked perfectly well until the decisive break downwards. And now, the tables have turned once again and the pair is over the line again. This downtrend line is still of importance as a separator, despite the breaks.

As mentioned last week, the downwards move was close to limit. This limit has probably been reached now, especially as more weak data from Canada came in joining the weak jobs report. The  relatively  high oil prices  have a weaker impact now. Another factor that could weigh on the loonie is a potential disappointment from Ben Bernanke in Jackson Hole on Friday.

QE3 in September is far from certain.

USD/CAD fell to low support but couldn't break through. It eventually moved back up. GDP is the main event this week. Here is an outlook on the major market-movers and an updated technical analysis for USD/CAD. Canada disappointed with weak retail sales: both the headline and the core numbers fell by 0.4%, while rises were expected. The governor of the BOC, Mark Carney, was bullish in comparison to other central bankers, but less hawkish than his usual tone. All in all, the loonie was unable to enjoy what seemed to be a hint of more money printing in the US.…

Saqib Iqbal10 years
Scroll Up
We use cookies to ensure that we give you the best experience on our website. If you continue to use this site we will assume that you are happy with it.Ok