The Canadian dollar made a comeback and eventually won parity. Ivey PMI, housing and employment data and trade balance are the major events this week. Here is an outlook on the major market-movers and an updated technical analysis for USD/CAD.

Canada’s economy expanded faster than expected in November, rising 0.3% following a minor climb of 0.1% in October, beating market predictions for a 0.2% growth rate. This reading will definitely improve the fourth quarter reading. Will Canadian economy continue to surprise in 2013?

Updates: There are no Canadian releases until Wednesday, when Ivey PMI will be published. The markets are expecting a slight improvement over the previous reading. USD/CAD was showing little change, as the pair traded at 0.9980. Ivey PMI looked very sharp, posting its best number since October. The index rose to 58.9 points, well above the forecast of 53.7 points. The markets are expecting a rebound from Building Permits, which will be released later on Thursday. The previous reading saw the construction indicator plummet by 17.29%. NHPI will be released at the same time. We could see some movement from USD/CAD on Friday, as Canada releases Trade Balance and key employment data. The pair is steady, and was trading at 0.9956. 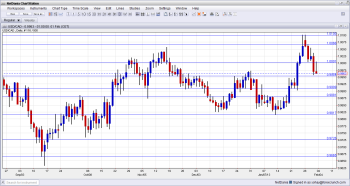 $/CAD started the week with another failed attempt to breach the 1.01 line (mentioned last week). It then began its descent, trying to battle 1.0066 at first and eventually settling above parity. After parity was broken, USD/CAD traded in a limited range above 0.9950. All in all, USD/CAD is becoming a much more technically friendly pair.

1.0250 was a peak before the pair moved below parity. 1.02 was the trough of 2009 and remains important since then, working in both directions.

Another round number, 1.01, was a trough back in July, and switched to resistance afterwards. 1.0066 was key support before parity. It’s strength during July 2012 was clearly seen and it gave a fight before surrendering. It has a stronger role after capping the pair during November 2012.

The very round number of USD/CAD parity is a clear line of course, and the battle was very clear to see at the beginning of August 2012. 0.9950 provided some support for the pair during November and worked as resistance earlier. Its stubborn behavior as resistance in December proved its strength. This line is close once again.

0.9910 remains the chart after serving as a bottom border for the pair in November 2012. It already managed to work as weak resistance in December 2012. 0.9880 showed that it is a clear separator in October 2012. It also had a role in the past. This line switches roles once again.

0.9817 was a stubborn peak in September and is now significant support. As seen in December 2012, this line worked as a cushion. It worked very nicely in January 2013. Lower, 0.9725 worked as strong support back at the fall of 2011 and showed its strength once again in October 2012.

Despite the relatively dovish rate decision in Canada, the BOC is still more hawkish than the FED, as we could see just now. All in all, the Canadian economy is still doing well, and we could see a return to lower levels.