Last week, Ivey PMI figures increased unexpectedly to 63.5 from 59.9 in the previous month suggesting expansion in the industrial sector. However employment data disappointed with higher unemployment rate of 7.5% from 7.4% in the prior month and a bit lower than expected job increase of 17,500 while 17,800 was predicted. Let’s see what this week has in store for us.

Updates: The Canadian dollar jumped over 1.03 on global fear at the beginning of the new week, but then recovered on European strength. See how to trade the Canadian building permits. The Canadian dollar strengthened on the general calm, and USD/CAD reached 1.0140 before Fitch had worrying things to say about Europe. 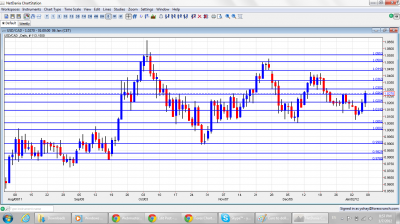 Dollar/CAD kicked off the year with a drop, It managed to go as low as 1.0076, before changing course. After a struggle with the the 1.02 line (discussed last week)

1.0677 is a long standing resistance line, tested several times in the past. 1.0550 is a minor line on the way up – a line which can slow the pair.  1.0500 is another minor line of resistance. It was a  pivotal around the same time and was a  point  of resistance before the pair fell.

1.0430 provided support when the pair was trading at higher ground during November and was tested successfully also in December, making it stronger.  1.0360 capped the pair in September and October and also provided support. It is weaker now.

The round number of 1.03 was the peak of a move upwards seen in November and has found new strength after working as a distinct line separating ranges. It is key resistance now. 1.0263 is the peak of surges during October, November and December, but was shattered after the move higher. The break above this line still needs to be confirmed.

The round figure of 1.02 was a cushion when the pair dropped in November, and also the 2009 trough. It is weaker now but remains pivotal.  1.0143 was a swing low in September and worked as resistance in the past. It capped a small recovery attempt in November.

1.0050 worked as support in November, was a swing low in December and had the opposite role back in 2010. It worked as a great cushion for the pair in November.

Higher oil prices certainly help the loonie, and so does the ongoing US growth, seen also in jobs. On the other hand, the worries about a housing bubble in Canada, and the rise in the unemployment rate, cast a shadow over Canada’s strength.

The Canadian dollar had a rough week, and surrendered to the greenback's superiority.  BOC Business Outlook Survey and Building Permits are the main events this week. Here's an  outlook  for the Canadian events and an updated technical analysis for the Canadian dollar. Last week, Ivey PMI figures increased unexpectedly to 63.5 from 59.9 in the previous month suggesting expansion in the industrial sector. However employment data disappointed with higher unemployment rate of 7.5% from 7.4% in the prior month and a bit lower than expected job increase of 17,500 while 17,800 was predicted. Let's see what this week has in…