Falling oil prices and the run to the US dollar (despite weak job figures) weigh on the loonie, but things aren’t too good at home either. Canada’s economy expanded by 0.1% in March following a 0.2% contraction in February, in light of improvement in the manufacturing and construction sectors. However the rise was less than the 0.4% growth rate predicted by analysts.

Updates: GDP improved in May, increasing 0.1%. However, this was well below the market forecast of 0.4%. Building Permits and the central bank’s interest rate decision will be published on Tuesday. USD/CAD broke above the 1.04 level in the Asian session, but then retraced. The pair was trading at 1.0381. The markets are not expecting any change  to the key Overnight Rate. The rate has been at 1.0% since 2010. The loonie continues to weaken, as USD/CAD pushed above the 1.04 line. The pair was trading at 1.0404.   Building Permits plummeted by 5.2%, surprising the markets, which had forecast a very slight drop of 0.3%. The central bank held the line on interest rates, maintaining rates at 1.0%. The loonie improved following a Rate Statment from the central  bank, which was less dovish than expected.  USD/CAD was trading at 1.0331. The Canadian dollar continued to improve, as USD/CAD pushed below the 1.03 line. The pair was trading at 1.0261. Canadian PMI, a key indicator  will be released later on Thursday. 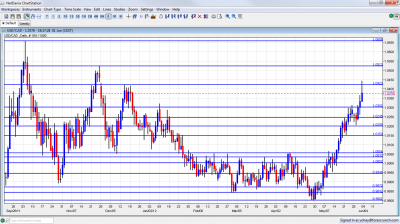 $/C$ began the week with a slide towards the 1.02 line (mentioned last week) before rising back up. After a struggle with 1.02, the pair made a convincing break and even temporarily crossed 1.04 before settling a bit lower.

1.0523 was a peak back in November and is minor resistance. 1.0423 is the high line that capped the pair towards the end of 2011 and now turns into key resistance.

The round number of 1.03 was resistance at the beginning of the year and now switches positions to key support. 1.0245 served as a separator for the move up when the pair rallied in May 2010 but is weaker now.

The round figure of 1.02 was a cushion when the pair dropped in November, and also the 2009 trough. It is weaker now but remains pivotal after being broken. 1.0150 was a swing low in September and worked as resistance several times afterwards.

The very round number of USD/CAD parity is a clear line of course, and the battle is renewed after the recent climb.

Under parity, we meet another pivotal line at 0.9950. It served as a top border to range trading in March 2012 and later as a line in the middle of the range.

Too many things are weighing against the Canadian dollar: US weakness, oil prices and also European events. While there might be some room for correction after the recent falls, we also might see a correction in Canadian job figures and a dire statement from the BOC, which can send the loonie lower and USD/CAD higher. Also from a technical perspective, the recent breakout provides more ammunition for the bulls.

The Canadian dollar fell against the USD for another week, after putting up a fight. Many interesting events are up this week with the rate decision, employment data and housing figures. Here's an  outlook  for the Canadian events and an updated technical analysis for the Canadian dollar. Falling oil prices and the run to the US dollar (despite weak job figures) weigh on the loonie, but things aren't too good at home either. Canada's economy expanded by 0.1% in March following a 0.2% contraction in February, in light of improvement in the manufacturing and construction sectors. However the rise was…