USD/CAD finally moved to lower ground. Gradual rises in oil prices are exactly what’s needed to help Canada without hurting US demand. The rate decision and employment data are the major events this week.  Here’s an  outlook  for the Canadian events and an updated technical analysis for USD/CAD.

Canada returned to growth in the last month of 2011. The 0.4% rate exceeded expectations and helped the loonie secure lower ground. Employment data, which is released very close the US job figures, will provide another exciting Friday. 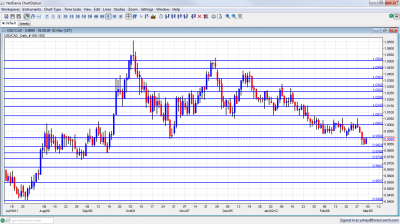 Dollar/CAD kicked off the week with a failed attempt to break above parity. It quickly returned to the 0.99 to 1 range. When it finally broke under 0.99 (mentioned last week), the break was decisive. Attempts to get back above this line failed.

The big week ahead requires taking caution and looking at a wide array of lines. 1.0550 served as a minor cap back in September, when the pair traded higher. The round number of 1.05 had a  similar  role later on, during a  surge  in November.

The 1.0440 line worked as support when the pair was trading at higher ground during November and was tested successfully also in December, making it stronger.  1.0360 capped the pair in September and October and also provided support. It is weaker now.

The round number of 1.03 was the peak of a move upwards seen in November 2010 and has found new strength after working as a cap in January 2012. 1.0263 is the peak of surges during October, November and December, but was shattered after the move higher. It’s far at the moment..

The round figure of 1.02 was a cushion when the pair dropped in November, and also the 2009 trough. It is weaker now but remains pivotal.  1.0143 was a swing low in September and worked as resistance several times afterwards.

Closer to parity, 1.0070 was a trough more than once in November, December and January. It worked as a very strong cap also in February 2012. The very round number of USD/CAD parity is a clear line of course, and was a line of battle that eventually saw the pair fall lower.

Under parity,  the round number of 0.99 provided support on a fall during October and also served as resistance back in June. The break below this line in March 2012 was very decisive. 0.9830 provided support for the pair during September and is now stronger after a first attempt to breach it failed.

Oil prices  can be a double-edged sword, but they seem to rise rather gradually. On one hand, Canada exports the black gold, but as taxes are low on fuel in the US, every change in global prices has an immediate impact on consumers and on the economy. Canada is dependent on the strength of the US economy, which now seems geared up for a strong NFP report. The Greek crisis, which has reached the cliff, could certainly weigh on the loonie, but it is showing greater strength than other commodity currencies.

USD/CAD finally moved to lower ground. Gradual rises in oil prices are exactly what's needed to help Canada without hurting US demand. The rate decision and employment data are the major events this week.  Here's an  outlook  for the Canadian events and an updated technical analysis for USD/CAD. Updates: A rise in GDP of 0.4% lifted the loonie over the parity level, as the pair dropped to 0.9950. USD/CAD pushed over  parity, then retracted to 0.9992. The markets are waiting for the PMI release. USD/CAD is hovering at the parity line. Ivey PMI hit 66.5, a 10-month-high. Building Permits fell…