Last week, manufacturing sales jumped by 2.6%, well above the 1.1% rise expected and inflation grew more than predicted with CPI rising 0.2% and Core CPI increasing by 0.3%. However foreign securities purchases dropped more than anticipated to 7.35 billion after an encouraging figure of 8.22 billion in the previous month. Let’s see what awaits us this week.

Updates: USD/CAD continues rising as the European debt crisis continues to catch the  headlines. The pair couldn’t conquer the 1.0360 line, at least not now. The weak Chinese Manufacturing PMI weighed heavily on global markets and sent USD/CAD to 1.0425, despite the relatively high oil prices – that remain stable despite the global sell-off. The Canadian dollar is strongly affected by the shocking German bond auction. With no safe havens left in the euro-zone, global worries are growing, and this strengthens the US dollar. USD/CAD  moved higher and got close to the 1.05 line, which wasn’t broken so far. The loonie continues to suffer from the euro crisis, as oil also weakens, in addition to the flow to the US dollar. The really big key line for USD/CAD is 1.0677. 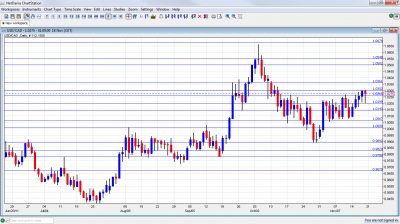 Dollar/CAD climbed early in the week, and met resistance at 1.0263 (mentioned last week). A second attempt to break higher eventually succeeded and the pair peaked at 1.03. It eventually closed the week at 1.0275, after very choppy trading.

We begin higher this week: 1.0750 was the top border of a long running range. 1.0677 is a veteran and distinct resistance line, which worked well in October and also in the past.

1.0360 capped the pair in September and October and also provided support. The round number of 1.03 was the peak of a move upwards seen in November.

1.0263 is the peak of recent surges during October and also November but has a weaker role now. The round figure of 1.02 was a cushion when the pair dropped in November, and also the 2009 trough.

1.0143 was a swing low in September and worked as resistance in the past. It capped a small recovery attempt in November.  1.0060 worked as support in November and had the opposite role back in 2010. It worked as a great cushion for the pair in November.

Below, 0.9667 is of importance after working as strong support back in March.

On one hand, the positive US figures and the rise in domestic inflation support a stronger loonie, but on the other hand, the might of the European debt crisis sends money towards the greenback. These forces are likely to continue the choppy trend.

The  Canadian dollar  retreated against the soaring US dollar.  Retail sales figures are the highlight of this week. Here's an  outlook  for the Canadian events and an updated technical analysis for the Canadian dollar. Last week, manufacturing sales jumped by 2.6%, well above the 1.1% rise expected and inflation grew more than predicted with CPI rising 0.2% and Core CPI increasing by 0.3%. However foreign securities purchases dropped more than anticipated to 7.35 billion after an encouraging figure of 8.22 billion in the previous month. Let's see what awaits us this week. Updates: USD/CAD continues rising as the European debt…

Saqib Iqbal11 years
Scroll Up
We use cookies to ensure that we give you the best experience on our website. If you continue to use this site we will assume that you are happy with it.Ok