XRP price headwinds are quickly being replaced by strong tailwinds

XRP price has catapulted from a loose cup-with-handle base and tested the $1.00 psychological level for the first time in three years. The long-term outlook is bullish if the international settlements token holds vital support.

In an appearance on Coindesk TV, the CTO of Ripple, David Schwartz, pointed out that all the evidence indicates BTC and XRP are similar despite SEC allegations that it is being sold illegally as a security. He said: “The market considers them similar. We consider them similar.”

Schwartz assured XRP holders that the lawsuit will not result in Ripple closing operations. People are committed to the ecosystem and will cooperate to save it from governing bodies acting outside of their legal authority.

“The market caps of these systems are in the billions of dollars. People acting in their own self-interest are not going to allow the ecosystem to die if there’s a way to save it.”

A fellow XRP advocate, Thomas Hedge, has started a petition on Change.org calling on the SEC Chairman-Designate Gary Gensler to permanently end the war on Ripple and end the harm of the SEC’s allegation on holders of the digital currency.

As part of the petition, Hodge encourages the SEC to commit to meet with XRP holders and similar digital assets to discuss how the regulatory institution can properly defend investors and not just create rules through questionable lawsuits.

The petition also makes the allegation that the former SEC Chairman is closely tied to “financial interests in bitcoin, ether and financial technology business in the People’s Republic of China”.

Although this specific situation might be about XRP, the broader issue is about preventing the SEC from picking the winners and losers in cryptocurrencies while simultaneously protecting third-party interests over retail investors.

XRP price needs to hold critical support during the consolidation

From late November 2020 to the beginning of April, Ripple forged a primary base in a cup-with-handle pattern. The April 5 breakout above $0.757 on heavy volume combined with the climb above the 23.6% retracement of the 2018-2020 bear market and the psychologically important $1.00 was overwhelming confirmation of a change in trend.

Moving forward, Ripple needs to hold the critical support between $0.600-0.800   as the current consolidation unfolds. Any weekly close inside the range will shift the outlook to neutral, and if there is a close below the range, it will downgrade the outlook to bearish.

The primary upside target is a weekly close above $1.00, followed by the resistance framed by the 38.2% retracement level at $1.328. 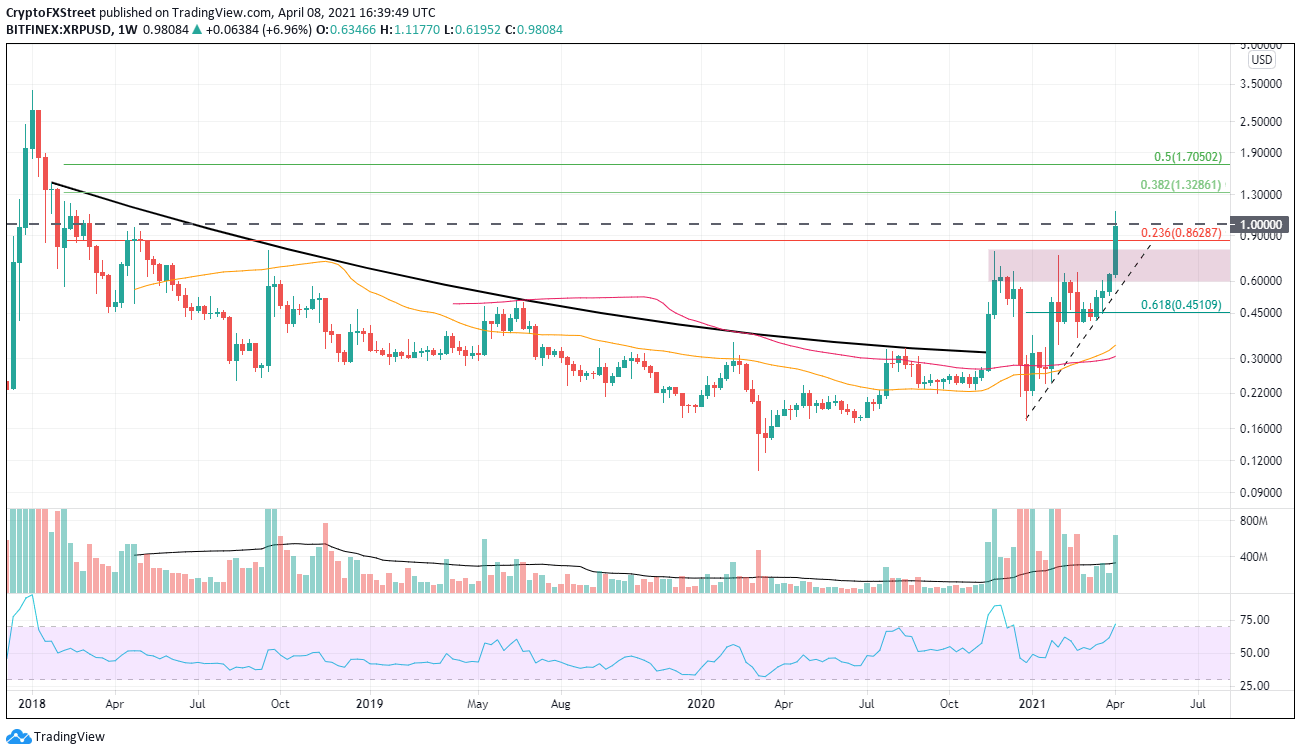 The downside is the price range mentioned above, followed by the rising trendline from the December low at $0.542.

XRP price breakout from a primary base confirms trend change. Rumors of Coinbase relisting may have triggered price spike. A new petition calls on the Securities and Exchange Commission (SEC) to end war on Ripple. XRP price has catapulted from a loose cup-with-handle base and tested the $1.00 psychological level for the first time in three years. The long-term outlook is bullish if the international settlements token holds vital support. Ripple's growing advocacy is alleging questionable ties between regulatory authorities and foreign third parties In an appearance on Coindesk TV, the CTO of Ripple, David Schwartz, pointed out that all…