Zilliqa is a blockchain platform based on sharded architecture and smart contracts written in the proprietary programming language, Scilla. It offers practical blockchain solutions for enterprises in various industries, including finance, digital advertising, and gaming.

In the recent development, Zilliqa announced the launch of Zilswap, the first decentralized exchange based on the Zilliqa blockchain. It is an on-chain scalable public blockchain platform created by Switcheo and based in Singapore.

What is Zilswap and why we should care

Zilswap brings DeFi to Zilliqa’s ecosystem. Basically, the platform is very similar to Uniswap as it uses a constant product automated market maker and a permissionless liquidity protocol to allow users to trade cryptocurrency assets in a decentralized and automated way.

As the official press-release goes:

Users can trade ZIL or ZRC tokens directly on the Zilliqa blockchain from their wallets, or add tokens they are holding to a liquidity pool to passively earn as market makers.

At the initial stages, the platform will support Singapore-Dollar (SGD) backed stablecoin, XSGD. It’s okay if you’ve never heard of it, as it was launched only today by Xfers, the Singapore-based payment solutions provider.

ZIL and XSGD will be able to play yield farmers by contributing their coins to the liquidity pools and earning fees from the trades processed on the exchange.

SUSHI, Sashimi, Sake, are not just the names from the Japanese cuisine. These are the tokens of the yield farming universe. Most of the projects borrowed the idea of Uniswap. Some of them also borrowed the programming code of the pioneer project.

A Redditor even posted a How-to for those who want to jump into the bandwagon of Uniswap’s clones. His business-plan includes creating a Uniswap clone, offering users higher rewards in native tokens, and lower gas fees.

So there’s a huge opportunity for newcomers in this DEX/LP field:

This is just a tiny part of the army of Uniswap’s clones.

At the time of writing, ZIL/USD is changing hands at $0.02, having gained nearly 10% in the last 24 hours. The coin sits at the 62nd place in the global cryptocurrency market rating compiled by Coinmarketcap. It has a market value of $221 million and an average daily trading volume of $86 million, ZIL is most actively traded at Binance and OKEx. 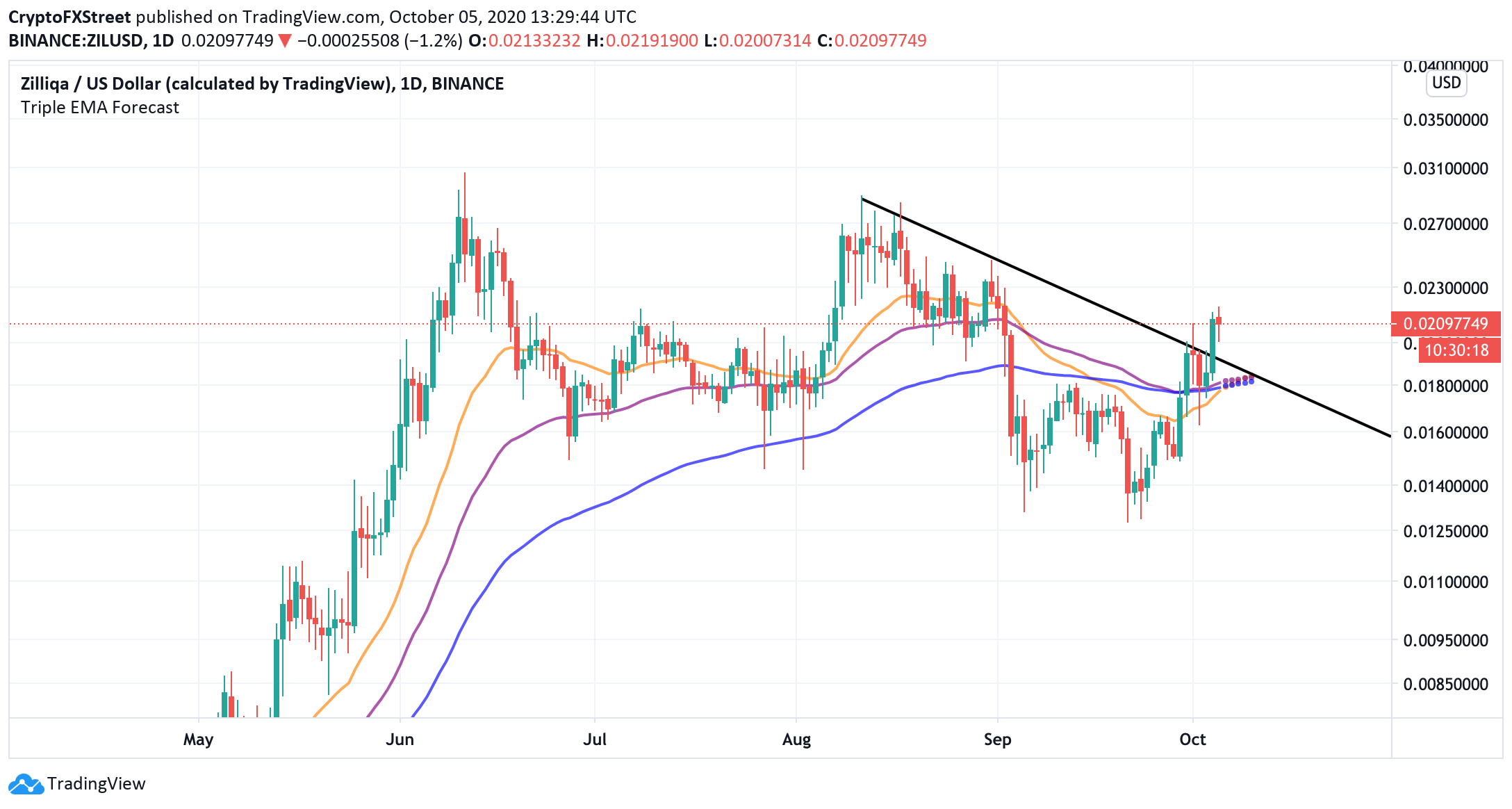 ZIL/USD bottomed at $0.013 on September 21 and has been gaining ground ever since. On a daily chart, the price broke above the downside trendline from August 11 high of $0.029. This development has improved the current technical picture and brought $0.025 into focus, which has been the highest since August 31. Once it is out of the way, the upside is likely to gain traction with the next focus on the above-mentioned top of $0.029 and psychological $0.03.

Meanwhile, on the downside, the support is created by the broken trendline at $0.019, followed by a combination of strong technical indicators, including short-term and mid-term daily EMAs (exponential moving averages). A sustainable move below this level will negate the bullish scenario and bring the recent low of $0.014 into focus. 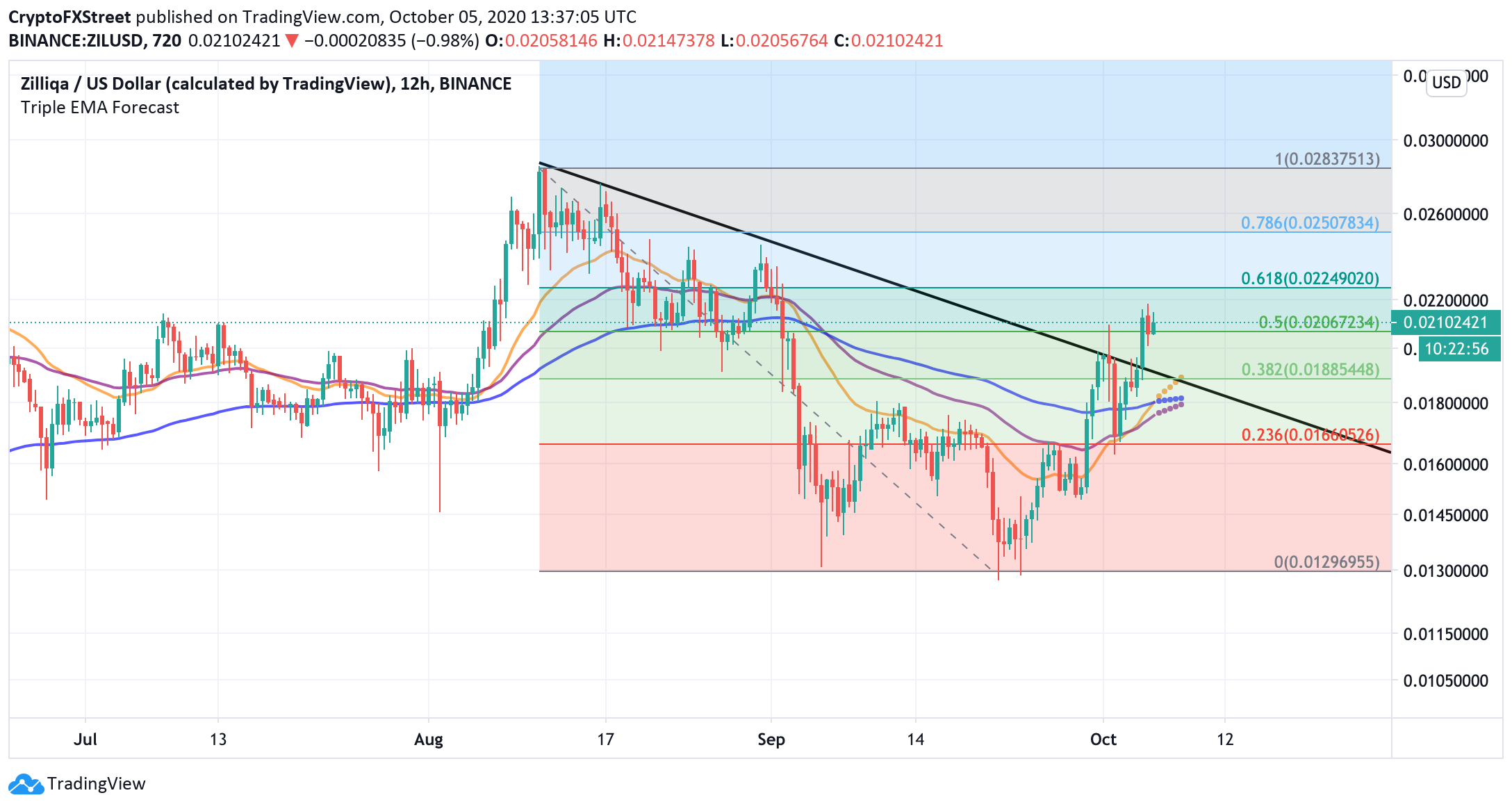 The picture on the shorter time frame confirms the bullish scenario. The above-mentioned resistance of $0.25 is reinforced by 76.8% Fibo for the downside move from August 12 high. While the support at $0.019-$0.018 coincides with 38.2% Fibo.

To conclude: The launch of Zilswap, the first DEX on Zilliqa blockchain, might have served as a bullish catalyst for ZIL. The coin has broken above the downside trend line and focused on $0.025 that separates us from an extended recovery towards $0.03.

Zilliqa announces the launch of Zilswap, the first DEX, based on the Uniswap idea. ZIL has gained nearly 10% in the last 24 hours and may continue moving upwards. Zilliqa is a blockchain platform based on sharded architecture and smart contracts written in the proprietary programming language, Scilla. It offers practical blockchain solutions for enterprises in various industries, including finance, digital advertising, and gaming.  In the recent development, Zilliqa announced the launch of Zilswap, the first decentralized exchange based on the Zilliqa blockchain. It is an on-chain scalable public blockchain platform created by Switcheo and based in Singapore. What is…