Latest
You are at:Home»Forex News»3 reasons EUR/USD can fall

The world’s most popular currency pair is stuck in the same familiar range once again, around 1.1360 at the time of writing and the day’s range is just below 20 pips. These low volatility situations do not last for too long. Where will the pair go to when it begins moving?

There are three reasons why bears may have the upper hand.

Early in the week, China reported the slowest growth levels since 1990. Trade talks between China and the US are not going anywhere fast. The Bank of Japan warned about global growth, and so did the International Monetary Fund. And the US government shutdown is also beginning to weigh on sentiment.

In the old continent, the European Union’s Pierre Moscovici added his concerns as well. The German ZEW figures showed a deterioration in current conditions.

Stocks are on the back foot amid this growing gloom, and the US Dollar finds demand as a safe-haven currency.

2) Draghi is ready to drag

Mario Draghi, the Italian President of the European Central Bank, has been putting a brave face in recent public appearances, acknowledging the slowdown but also remaining optimistic.

But for how long? He is usually quite dovish and cannot ignore worrying signs, whether they come from his own country’s clash with Brussels or China.

Tensions are mounting towards the first ECBdecision of 2019 coming on Thursday, and his tone may weigh on Euro.

3) Technical: Bears are in control 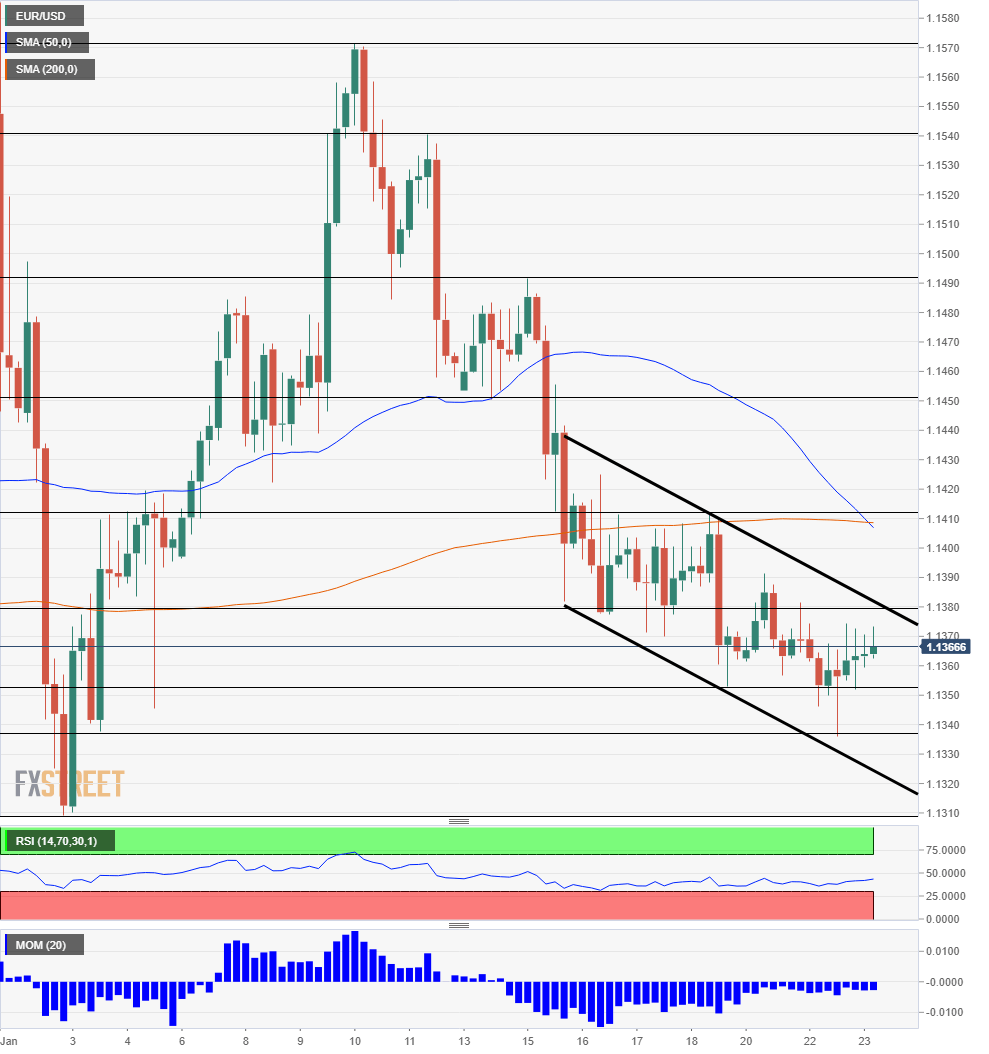 The four-hour chart shows that the pair continues trading in the downtrend channel that formed last week. The recent stagnation pushed euro/dollar closer to the upper end of the channel and it may now fall towards the lower end.

Another bearish sign comes from the Simple Moving Averages. The 50 SMA is crossing the 200 SMA to the downside, indicating further falls.

Momentum remains to the downside, and the Relative Strength Index (RSI) is still above 30. This implies that the pair does not suffer from oversold conditions.

Get the 5 most predictable currency pairs
Previous ArticleEUR/JPY Technical Analysis: Keeps the bearish outlook below the 125.00 region
Next Article GBP/USD climbs back closer to 2-month tops, eyeing 1.30 handle