Latest
You are at:Home»Forex News»Bitcoin price prediction: BTC/USD journey back into the $8,500-zone hampered by multiple resistance levels – Confluence Detector

BTC/USD has gone up from $8,267.85 to $8,290.60 so far today. Like the rest of the crypto market, BTC/USD suffered a heavily bearish Friday, as well. The price of the asset fell from $8,588 to $8,267.85 amidst high selling pressure after it reached an intra-day high of $8,838.15. The daily confluence detector shows us that there are several resistance levels on the upside, hampering further growth. 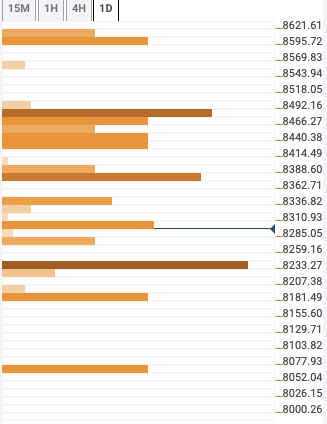