Latest
You are at:Home»Forex News»BOE Preview: Green light to gains? Three ways the bank can boost the pound

Fireworks – that is in the Federal Reserve’s gift, but the Bank of England may provide a more certain path for currency traders than its American counterpart. There is a wide consensus that the BOE will leave rates unchanged, but its updated view on the economy and hints at future policy may rock markets.

Here are three ways the “Old Lady” may stir sterling to the upside.

The most significant way that the BOE hit the pound was by opening the door to negative rates. While sub-zero borrowing costs have had little success in reviving growth in Japan and the eurozone, they undoubtedly weighed on respective currencies. Punishing investors and commercial banks for parking funds send money out.

However, after discussing the options more than once, the London-based institution cooled down market concerns. Andrew Bailey, Governor of the Bank of England, has reiterated that while technical preparations are in place, slashing rates below zero is off the cards.

If the BOE repeats this stance, it would further alleviate fears and allow sterling to shine.

At the time of writing, the UK has already inoculated COVID-19 vaccines to over 37% of its population – the world leader among large countries. The immunization scheme and the lockdown are bearing fruit. UK cases have fallen sharply from the highs in January. 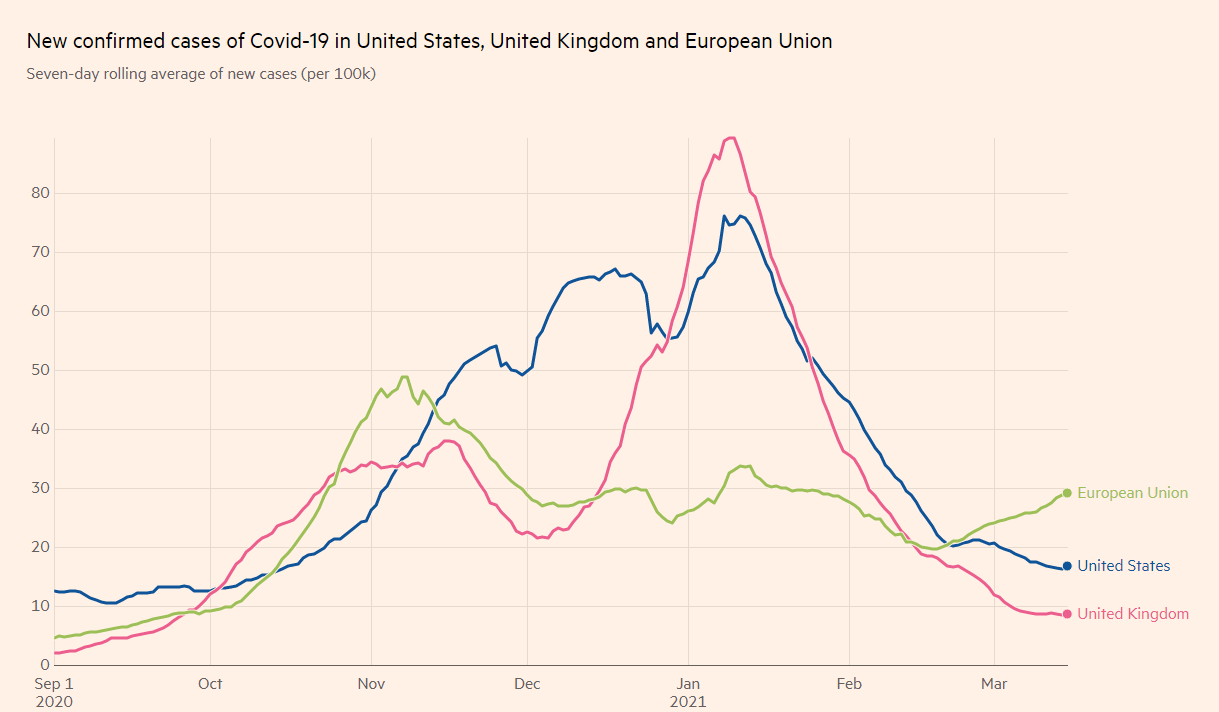 During those difficult days, the economy still outperformed estimated, shrinking by 2.9% in the first month of the year. And since then, the government kicked off the reopening and is set to bring the country to near-normal conditions in mid-June.

Monthly Gross Domestic Product has surprised to the upside in the past three releases, which refer to times of strict shutterings:

All in all, the near future looks promising for the UK

Several major central banks are worried about rising bond yields and some have even acted to bring them down. The US Fed is happy to see better returns on US debt and is only concerned about the pace of change. What about the BOE?

Returns on ten-year UK Gilts have returned to pre-pandemic levels:

So far, the BOE has been reluctant to discuss the topic – and may refrain from talking about yields in its statement nor in its accompanying meeting minutes. Moreover, at this March meeting, the bank does not hold a press conference, giving reporters no chance to discuss the topic.

This “sound of silence” is powerful and would allow the returns to continue higher – carrying sterling higher with them.

An extra boost to the BOE’s forecasts comes from across the pond – America’s recently approved stimulus funds are also set to propagate around the world, indirectly boosting demand for British goods.

The BOE’s decision is set to pale in comparison to the Fed’s but may provide pound bulls ammunition to push higher – for all the good reasons.

Get the 5 most predictable currency pairs
Previous ArticleZilliqa price poised for a healthy correction after significant 25% breakout
Next Article USD/CAD closes in on 1.2500 as DXY climbs to 92.00 ahead of FOMC