There is little doubt that last week’s price action in financial markets caused many a trader to reach for heartburn relief or upset stomach remedies, as the roller coaster price action whipsawed asset classes in spectacular fashion.   While the ferocity of such moves were nauseating at times, it does substantiate our main thesis for the 2016 calendar year; that two-way volatility will continue to remain heightened as central banks break from all rowing in one succinct direction.   The irony is almost laughable would it not be for the dire consequences it can have on businesses and their decision making process, but the only thing certain in the year ahead will be uncertainty around the path ahead for monetary policy throughout the developed world.   While last week’s capricious price action will no doubt leave some participants gun-shy, there is the potential for financial markets to calm down somewhat this week, as Chinese markets are closed for the Lunar New Year, and the economic calendar is extraordinarily light until Janet Yellen testifies to Congress on Wednesday.

The American buck managed to recover into the end of last week, but was caught in the crosshairs of dovish Fed speak from Bill Dudley who warned about the effects of tightening financial conditions on the fragile state of the global economy.   Much like last summer when Dudley threw cold water on a September rate hike by cautioning against tightening financial conditions due to the volatility in global markets as a result of the meltdown in Chinese equity markets, last week’s warning added fuel to bets the Federal Reserve’s forecast for interest rate hikes in 2016 are too ambitious; subsequently, market participants are not even fully discounting one additional rate hike over the course of this year.

In early January we opined that the shaky start to the year for global equities due to capital flight from Chinese equity markets would lead to cautious behaviour from the Fed, and interest rate expectations would dampen somewhat, though this recent move seems somewhat overblown.   Somewhere in the neighbourhood of two additional rate hikes in 2016 seems to be a more likely trajectory in our opinion, and Friday’s job report should help the big dollar recover somewhat in the coming weeks.   While the troika of Fed leadership (Yellen, Dudley, and Fischer) aren’t likely to be overzealous about the domestic economic outlook, the labour market in the United States remains tight, and should help the Fed hold a cautiously optimistic view of the road ahead.

The Fed has previously published reports that suggest due to demographic shifts in the economy, namely the amount of baby-boomers that are retiring and exiting the labour force, headline job growth of ~150k workers per month is all that is required to push the unemployment rate down.   And yes, while the headline report of 151k new jobs created in January was far below the median analyst estimate, the ancillary indicators such as average earning and average workweek hours increased over the previous month, along with the unemployment rate dropping to 4.9% while the labour force participation edged up a tenth of a percent to 62.7%.   The tighter labour market condition helped the DXY cauterize its bleeding post payroll report, though the euro and yen both remain lofty against the big dollar heading into the new trading week.   With the economic docket devoid of tier-one data until the latter half of the week, market participants will be keenly focused on Janet Yellen’s testimony on monetary policy to Congress Wednesday.

As a result of the American buck regaining ground, some of the steam from the loonie rally dissipated, as short covering in the USDCAD pair propelled it higher into the end of the week.   The domestic data from Friday was mixed in terms of overall influence on the waterfowl, but the firming of US rates has brought the loonie back to reality given the lack of positive price action in commodity markets.   The employment report from Friday was disappointing given that the Canadian economy shed close to 6k jobs in January, with the unemployment rate ticking up to 7.2% while the participation rate remained unchanged at 65.9%.  On the bright side, Canada’s trade deficit for December narrower by a wider margin than expected, coming in at 0.6bln as opposed to the 2.2bln that had been forecast.   Non-energy exports were up 4.5% in the month of December, showcasing the type of performance Poloz and the Bank of Canada will be expecting given the low Canadian dollar.   On a quarterly basis however, export volume declined by 0.1% while real imports decreased by 2.6%.   So while the December numbers were better than expected given the non-energy export performance, the low value of the Canadian dollar has yet to generate the type of export activity the Bank of Canada would like to see on a sustained basis given the quarterly numbers showed a decrease in activity.   The spread between two year rates on US and Canadian government debt turned upwards at the end of last week, and in our view is a risk to the continuation of the loonie bull move if the economic data from the US confirms the fears of a contraction in the US are overdone, and a firming of interest rate differentials leads the American dollar higher against its Northern counterpart. 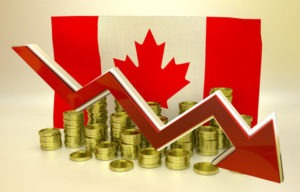 There is little doubt that last week's price action in financial markets caused many a trader to reach for heartburn relief or upset stomach remedies, as the roller coaster price action whipsawed asset classes in spectacular fashion.   While the ferocity of such moves were nauseating at times, it does substantiate our main thesis for the 2016 calendar year; that two-way volatility will continue to remain heightened as central banks break from all rowing in one succinct direction.   The irony is almost laughable would it not be for the dire consequences it can have on businesses and their decision…