Latest
You are at:Home»Forex News»Cryptos are crumbling – levels to watch

Bitcoin is providing to be a safe-haven asset – and that can be painful for the cryptocurrency market when investors stop seeking refuge. The price of digital coins has dropped substantially after the US announced it would postpone some of the tariffs planned on China. President Donald Trump – “not a fan of Bitcoin” – has decided to spare US shoppers from new levies that would have bumped prices higher. And on the way, he sent Bitcoin lower.

And while the world’s largest economies are getting closer, one of the biggest banks may be distancing itself from a dominant crypto exchange. Barclays has reportedly cut ties with Coinbase – ending a relationship which began in March. Apart from the blow to the reputation of digital coins, Coinbase would lose access to the UK’s Faster Payments Scheme (FPS) – slowing sterling transactions. Some speculate that the major British bank wants to distance itself from cryptos.

This is what the Crypto Confluence Detector shows in its latest update: 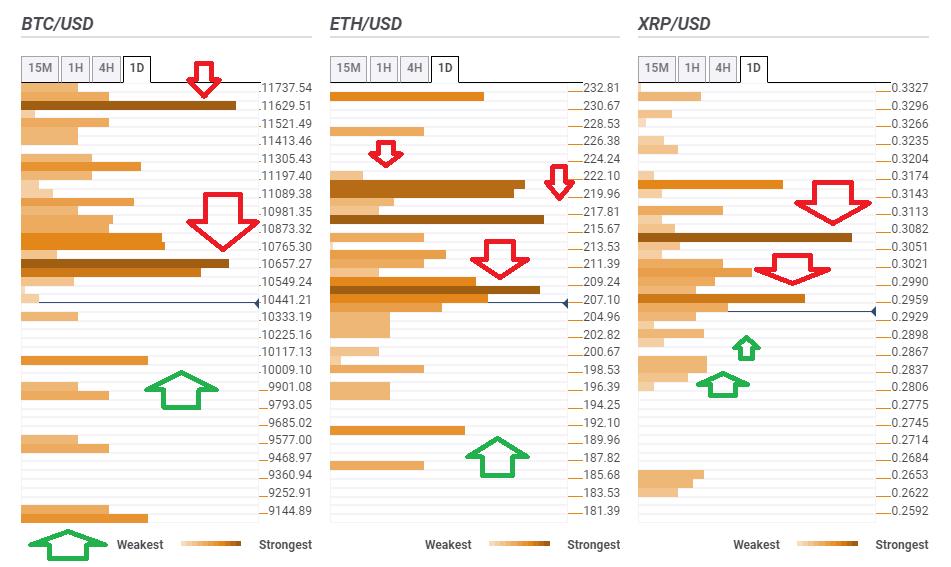 Bitcoin is licking its wounds from Tuesday’s downfall and faces resistance at $10,657 which is a dense cluster including the Simple Moving Average 2004h, the SMA 10-1h, the Fibonacci 38.2% one-month, the Bollinger Band 15min-Upper, and more.

Further above and with enough momentum, the granddaddy of cryptocurrencies may challenge $11,629, which is the Fibonacci 61.8% one-month, the Fibonacci 38.2% one-week, and the Pivot Point one-day Resistance 2.

In case of a severe downfall, the king of cryptos could fall to $9,144, which is the confluence of the previous monthly low and the PP one-week Support 3.

Looking down, noteworthy support awaits only at $191 – last month’s low.

All in all, Vitalik Buterin’s brainchild is in a perilous technical state.

Below, weak support awaits at $0.2988, where we find the previous weekly low.

Next, somewhat more substantial support awaits at $0.2837, which is the meeting point of the previous monthly low and the PP 1d-S3.