Latest
You are at:Home»Forex News»EUR/USD has some room for recovery, but only temporarily

How low can the euro go? That is the question on many traders’ minds after Friday’s collapse – and we answer that a temporary recovery may be on the cards.

Chancellor Angela Merkel ruling CDU party won the local elections in Saxony. Despite losing votes to the far-right Alternative für Deutschland (AfD), the worst fears of a victory for the extremists did not materialize.

In Brandenburg, the center-left SPD – Merkel’s coalition partner at the national level – held onto their poll position. The region which surrounds Berlin also saw an increase in voting for the AfD, but even here – the worst-case scenario was avoided.

These results are set to help stabilize the shaky coalition and Merkel’s role as a beacon of stability in a continent undergoing populist resurgence.

New US tariffs on China came into effect on Sunday – and so did China’s counter duties. The market reaction has been muted as the levies were announced in advance, and due to today’s Labor Day holiday in the US.

However, there is another reason for the calm. President Donald Trump has said that high-level talks are still set to take place later this month in Washington.

Until relatively recently, calm in the trade war boosted the US dollar as investors sold off safe US bonds – lowering the odds of the Federal Reserve cutting interest rates.

However, the upcoming stimulus from the European Central Bank is getting closer – and calm in trade wars means better prospects for German manufacturers – which depend on exports to China.

The Relative Strength Index (RSI) on the four-hour chart is below 30 – indicating oversold conditions – and a potential rebound. After an initial bounce, EUR/USD may resume its falls as momentum is still to the downside, and the pair trades below the 50, 100, and 200 Simple moving Averages. 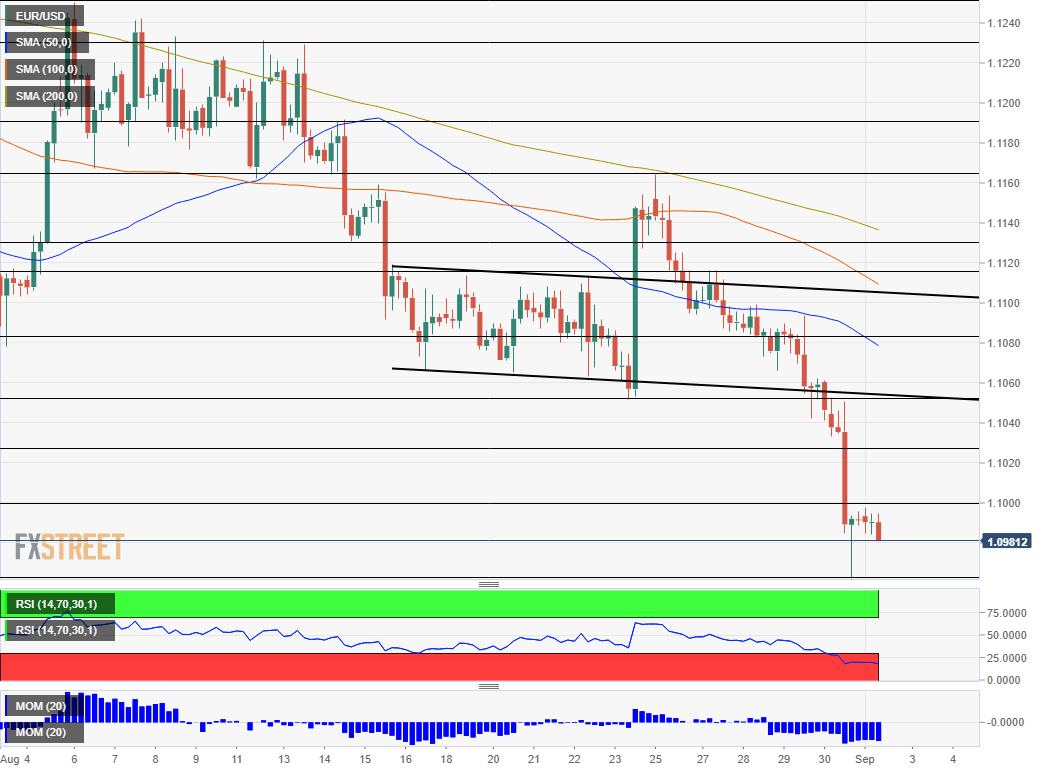 As mentioned earlier, such a potential bounce may be temporary. While German politics are encouraging for the euro, Italy has yet to form a government. The 5-Star Movement and the Democratic Party have only agreed on fundamental principles and still need to iron out many details.

Moreover, the economic situation in the euro-zone remains worrying. Markit’s final purchasing managers’ indexes for the manufacturing sector will serve as a reminder that prospects remain bleak.

Get the 5 most predictable currency pairs
Previous ArticleRipple’s XRP technical analysis: XRP/USD bearish pennant subject to a breakout
Next Article Irish PM Varadkar: Significant financial package will be needed for companies in no-deal