Latest
You are at:Home»Forex News»EUR/USD: Only a dead cat bounce? US Retail Sales may trigger a downfall to 1.20

Is that it? EUR/USD bulls may be asking themselves, frustrated from the minor recovery – a classic “dead-cat bounce.” Markets have been recovering on Thursday and early on Friday after the blow from the higher than expected jump in the Consumer Price Index in the US.

That jump of Core CPI to 3% triggered a rush to the US dollar on concerns that the Federal Reserve would be forced to print fewer greenbacks sooner than later. Officials at the central bank seemed to be surprised by the pace of rising prices.

The mood has since changed – but for no reason. Thursday’s producer prices also exceeded projections, showing additional inflation in the pipeline, and a fresh fall in jobless claims to 473,000 also points to resilience in the job market. Wage hikes from Amazon and MacDonalds combine the two factors of rising employment and prices.

The current calm is likely one coming ahead of a storm – US Retail Sales figures for April are forecast to show another increase in shopping, on which the American economy is centered. While another 9.8% leap is not on the cards, any expansion could reignite the rush toward the dollar.

The focus on the consumer continues with the University of Michigan’s preliminary Consumer Sentiment Index data for May. Economists expect another bump up in confidence. More importantly, investors will eye the inflation expectations components of that publication. Any uptick could also boost the greenback.

US Michigan Consumer Sentiment May Preview: Jobs are plentiful, inflation is the worry

On the other side of the pond, Europe’s vaccination campaign is accelerating but still lags America’s. Virus statistics in Germany have extended their decline, showing the efforts are bearing fruit. The US Center for Disease Control (CDC) announced new guidelines, allowing fully immunized people to drop their face masks, seemingly in an effort to stop slowdown in jabbing.

All in all, the tables are mostly tilted toward the dollar, which may resume its gains following a signal from the data. 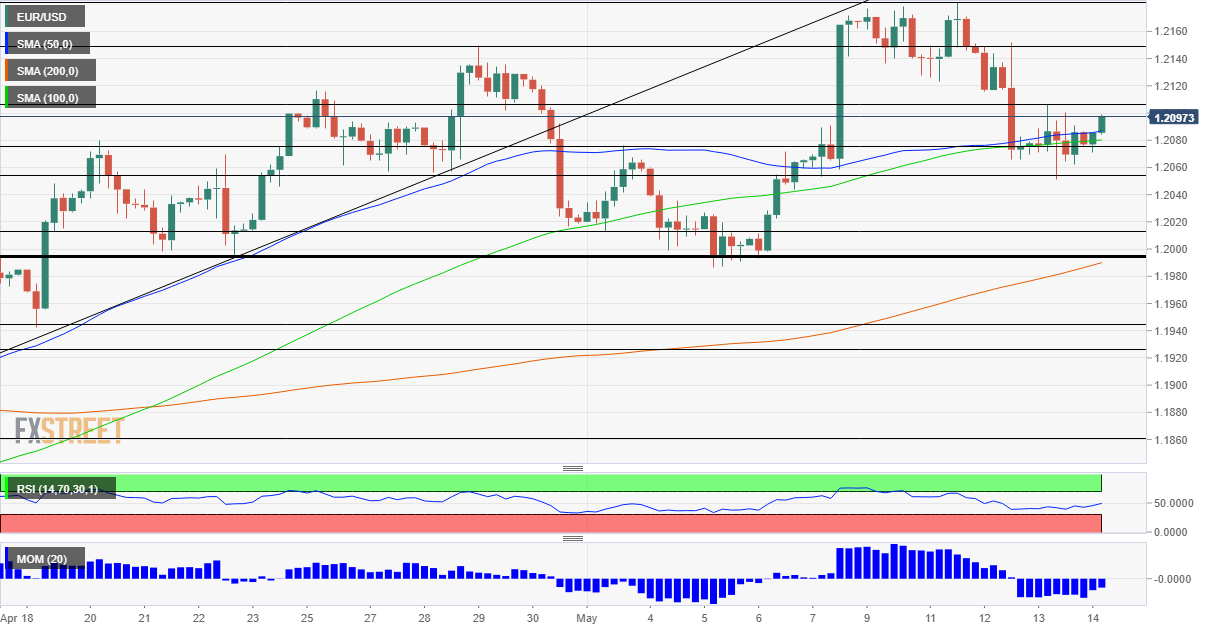 Momentum on the four-hour chart has turned negative, but the currency pair has managed to surpass the 50 and 100 Simple Moving Averages (SMAs). Euro/dollar seems to be looking for a new direction.

More Inflation and the dollar: Is the connection as direct as it seems?