Latest
You are at:Home»Forex News»EUR/USD out of oversold conditions and could resume falls

The EUR/USD is trading around 1.1400 in the wake of the new week, up from the lows seen on Friday but below the levels seen this time last week. German Chancellor Angela Merkel’s CDU party and her coalition partners, the SPD, both lost significant ground in regional elections in Hesse. The German state is host to Frankfurt, the financial hub of Europe’s largest economy.

The vote is seen as a disapproval of the Grand Coalition (GroKo in German) and may trigger a breakup of the government.

The concerns about Germany join the ongoing clash between Italy and the European Commission over Italy’s planned 2.4% deficit budget proposed for 2019. Rating agency Standard & Poors left Italy’s credit rating unchanged late on Friday but downgraded the outlook to “negative.” The news allows some temporary calm, at least for now.

In the US, the first read of Q3 GDP slightly beat expectations with an annualized increase of 3.5%. However, a significant contribution by inventories in Q3 implies weaker growth in Q4. Also, exports dropped substantially.

The US economic calendar is quite busy this week with the Fed’s favorite inflation measure standing out today. The Core PCE Price Index for September is projected to remain at 2%, precisely the Fed’s target. Personal Income and Personal Spending are also of interest.

Americans will go to the polls on November 6th for the Mid-Term Elections. Political violence has taken over the headlines. A Trump supporter was arrested as the primary suspect in sending bombs via mail to prominent critics of the President. A mass shooting in a synagogue in Pittsburgh left 11 dead. The killing was motivated by antisemitic hate.

It is unclear how these recent developments will impact the vote. Fresh opinion polls are awaited. Democrats are projected to flip the House, the lower chamber, while Republicans are forecast to retain the Senate. A split government could have significant implications on markets and the US Dollar.

See: What the US mid-term elections mean for currencies: everything you need to know 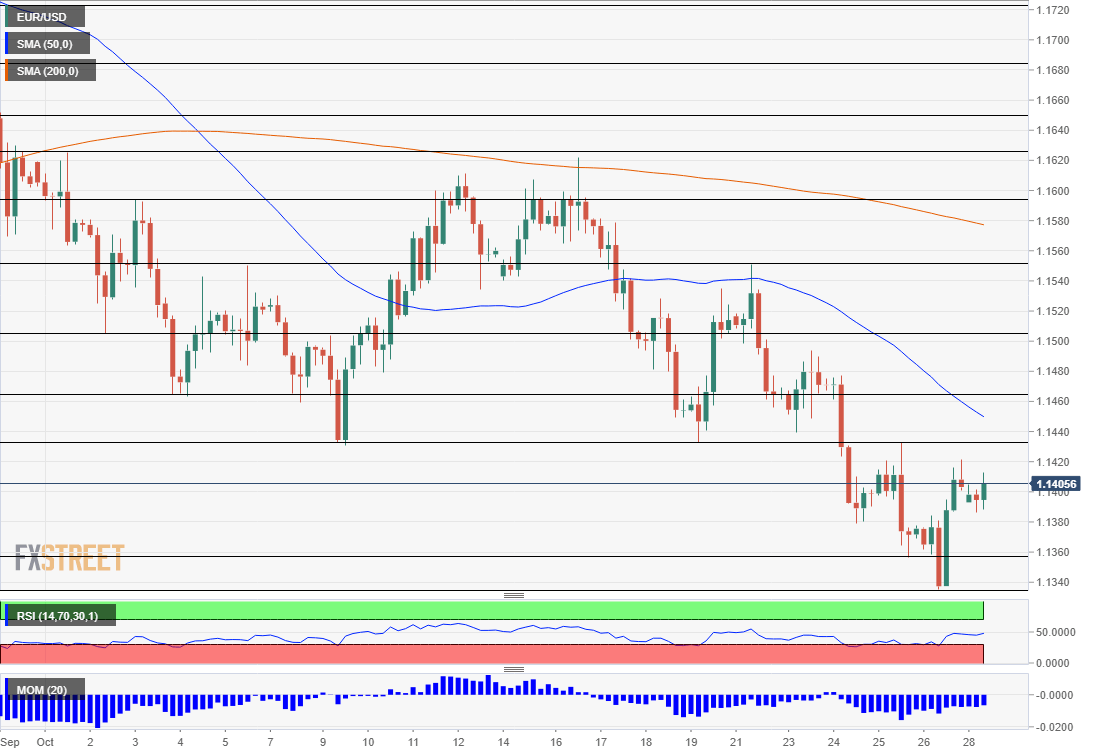 Looking at the four-hour chart, the EUR/USD is trading below the Simple Moving Average for the 50 and the 200 periods. Momentum is clearly to the downside while the Relative Strength Index has stabilized. With the RSI no longer pointing to oversold conditions, the EUR/USD has room for falls.

On the upside, 1.1430 is the immediate level of resistance. It served as support twice in October and then capped the pair in a recovery attempt late last week. 1.1465 supported the EUR/USD early in October. 1.1505 held the EUR/USD down in mid-October and was a swing low beforehand. 1.1550 was the peak before the recent downfall.

Get the 5 most predictable currency pairs
Previous ArticleNZD: Sliding lower as global optimism fizzles out – ING
Next Article Riksbank to hike, but for how long is the window open? – Nordea Markets