EUR/USD is trading just below 1.1400 but above the lows of 1.1306. Currency markets suffered a “flash crash” which was best seen in a collapse of USD/JPY and AUD/USD.

It happened in the illiquid hours after the US session had ended and when Japan was waking up. The illiquid situation was exacerbated by an extended New Year’s holiday in the Land of the Rising Sun. While USD/JPY collapsed from 109 to the 105 handle, EUR/USD only dropped to 1.1306 before recovering back to the familiar ranges.

The immediate trigger was the earnings warning that Apple issued after the close in Wall Street. The tech giant cut its revenue forecast due to falling sales of iPhones in China. CEO Tim Cook said the company had underestimated the Chinese slowdown due to trade wars. His comments piled up on weak Manufacturing PMI’s from the world’s second-largest economy and on jittery stock markets. The risk-off mood pushed the safe-haven yen higher and the risk Aussie lower. The euro is also in the “risk” camp but did not suffer that much.

Stock markets will likely provide guidance for the next move in currencies, with a correlation between EUR/USD and shares.

Later in the day, the US ADP Non-Farm Payrolls is expected to show a steady gain in private sector jobs in December, with a number similar to 179,000 reported for November. The final ISM Manufacturing PMI for 2018 is forecast to drop from the highs of 59.3 reported in the previous month.

In the old continent, the euro-zone manufacturing PMI was confirmed at 51.4 for December, which still shows expansion. However, the data for Italy points to a potential recession in the euro zone’s third-largest economy. Italy’s two coalition partners, The League, and the 5-Star Movement have passed the EU-approved budget but may now clash over other issues. 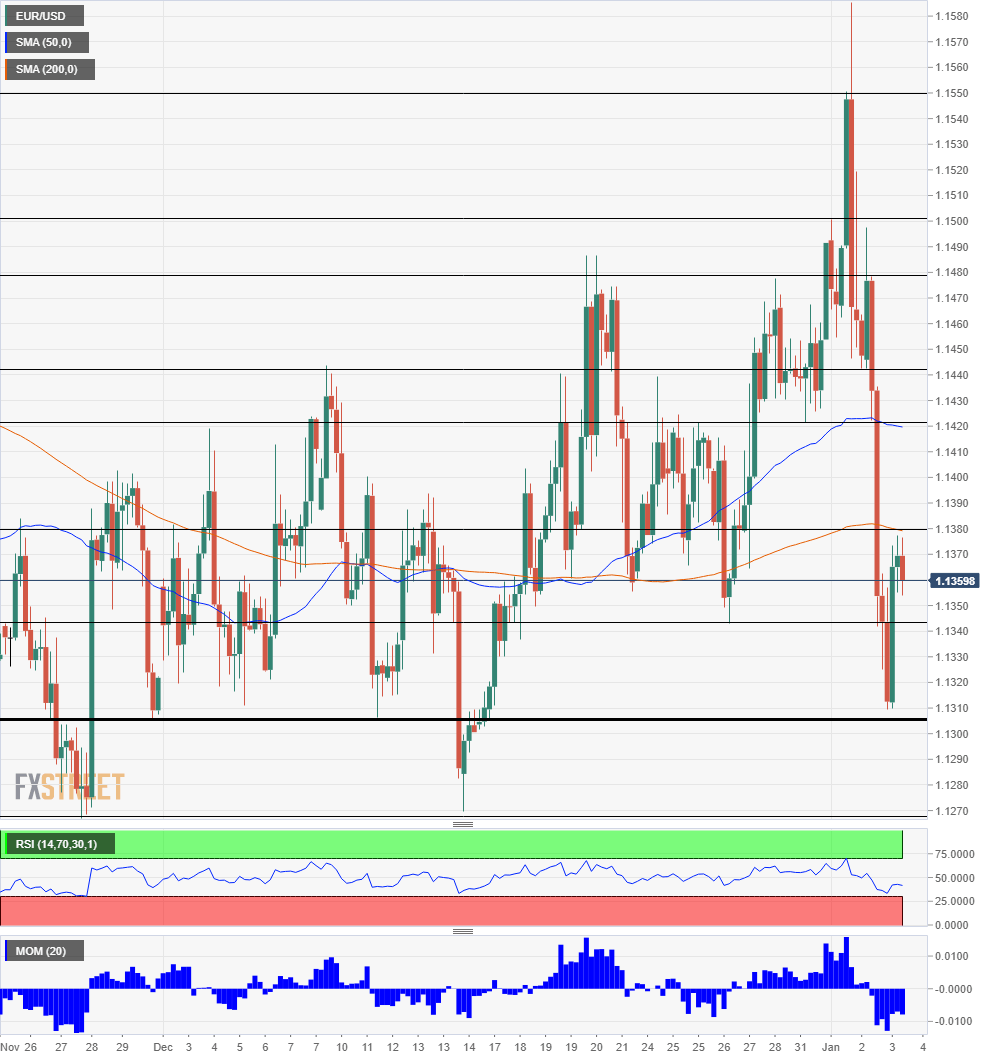 EUR/USD looks vulnerable as Momentum on the four-hour chart points to the downside and the pair is capped by the 200 Simple Moving Average. This is a stark contrast to the favorable conditions it had enjoyed on Wednesday.

Support awaits at 1.1340 which provided support in late December. 1.1310 is the flash crash low and it coincides with swing moves to similar levels in early December. The double-bottom at 1.1270 and the 2018 trough at 1.1215 are the next levels to watch.