Latest
You are at:Home»Forex News»EUR/USD rally awaits Trump – tweets may end it

Brick by brick, EUR/USD is rising in response to reports that trade talks have been constructive. The upbeat mood in markets is supporting the euro and weighing on the safe-haven dollar.

US Trade Representative Robert Lighthizer and Treasury Secretary Steve Mnuchin spoke with Chinese Vice Premier Liu He over the weekend and used video conferencing – yet additional details are lacking. Nevertheless, the positive labeling of the negotiations joins optimistic words from US Commerce Secretary Wilbur Ross, who expressed optimism on Friday.

As always, the final word belongs to President Donald Trump, who is yet to decide on the removal of tariffs that markets so keenly desire to see. The administration’s plans to slap new duties on China on December 15 are still intact with four weeks to go.

Mary Daly, President of the San Francisco branch of the Federal Reserve, has said that the low interest-rate environment has been supporting the US economy. Nevertheless, the central banker has maintained the Fed’s line, backing a long pause in rates after three cuts. The bank’s meeting minutes are due out on Wednesday, and they may shed more light on the path of monetary policy.

On the other side of the pond, several members of the European Central Bank will be speaking during the day. Luis de Guindos, the bank’s Vice-President, and Phillip Lane, the Chief Economist, stand out. They will likely repeat the ECB’s call on governments to do more.

Last week, Germany reported a meager growth rate of 0.1% in the third quarter – enough to save it from a recession. Some fear that escaping an official downturn may limit any fiscal response to the substantial slowdown.

With a few indications on the economic calendar, the focus remains on trade talks and central bank speculation. 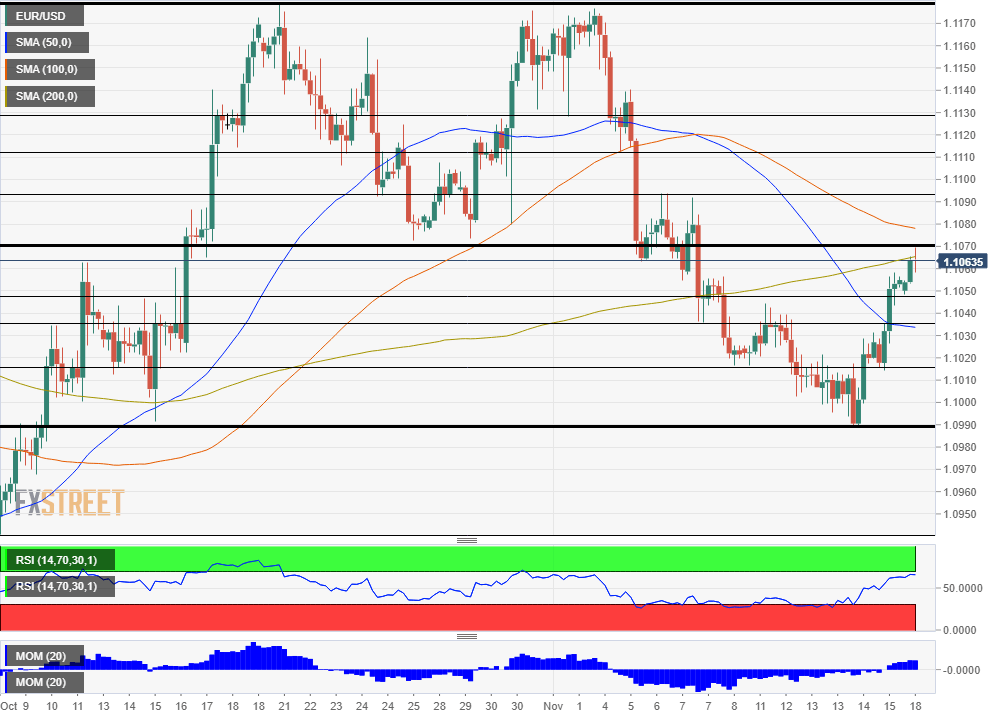 Momentum on the four-hour chart has turned positive and euro/dollar has broken above the 200 Simple Moving Average after topping the 50 SMA late last week. Overall, bulls have gained considerable ground.

More: EUR/USD Forecast: Recovery could continue in the short-term

Get the 5 most predictable currency pairs
Previous ArticleECB’s de Guindos: Low-for-longer interest rate environment to weigh on bank profitability
Next Article RBNZ likely to have two further cuts in May and August next year – ANZ