– Headlines coming out from the US-Sino trade talks are set to move markets.

– Wednesday’s four-hour chart is pointing to fresh falls for the currency pair.

Has the German economy bottomed out? That may help the euro to battle the recent wave of USD strength stemming from upbeat data and optimism about trade talks.

German Factory Orders beat expectations with an increase of 1.3% in September, substantially beyond 0.1% expected. The manufacturing sector has been dragging the continent’s locomotive down, while other parts of the economy have been keeping it afloat.

Markit’s final Services Purchasing Managers’ Index (PMI) for Germany adds to the argument that the industry is not dragging the continent’s largest economy to a recession. It has been revised up to 51.6 against 51.2 in the original publication.

These figures, alongside an upward revision to August’s euro-zone Retail Sales figure to 0.6%, have allowed the common currency to recover against the dollar. While EUR/USD has been nearing 1.11, it is still below levels seen earlier in the week.

The greenback advanced on Tuesday after the ISM Non-Manufacturing PMI beat expectations with 54.7 points. Similar to Europe, America’s economy is split between robust consumption – better than Europe’s – and a struggling manufacturing sector.

The dollar also enjoys upbeat reports from US-Sino trade talks. Beijing has reportedly asked Washington to remove not only the latest 15% tariffs imposed in September, but also the 25% ones dating to 2018. While China’s demands may break up the talks, markets are set to cheer an American agreement to remove more duties.

The erratic nature of President Donald Trump’s trade war has been weighing on markets and was one of the reasons for the Federal Reserve’s three rate cuts in a row. A deal between the world’s largest economies – even one that skips sensitive, structural issues – reduces the chances of further rate cuts by the Fed.

Neel Kashkari, President of the Minnesota branch of the Federal Reserve, has said that interest rates are now accommodative – indicating he supports the bank’s long pause. Kashkari is known as a dove – backing loose monetary policy. His words contribute to a stronger dollar.

John Williams of the New York Fed and Charles Evans from the Chicago branch will speak today.

All in all, while upbeat figures from the euro area may keep the single currency bid, the general trend is of dollar strength – pending news from the negotiations. 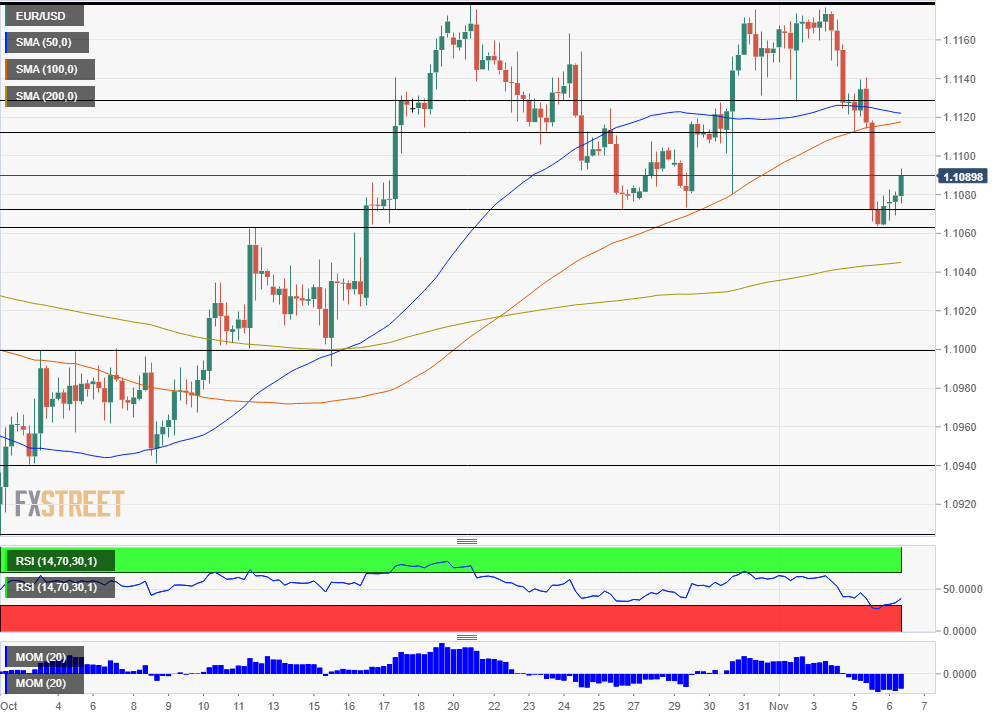 EUR/USD is suffering from downside momentum on the four-hour chart and has lost the support of the 50 and 100 Simple Moving Averages. The Relative Strength Index has bounced above 30, thus exiting oversold conditions and allowing for a resumption of the downfall.

The world’s most popular currency has been seeing a battle between central banks – both enacting accommodative monetary policy and pushing their respective currencies lower. The Federal Reserve has slashed rates in the past three meetings after raising them as late as December 2018.

At the same time last year, the European Central Bank concluded its bond-buying program and expressed optimism about raising rates. Yet similar to the Fed – the ECB also made a U-turn and cut rates in September. Moreover, the Frankfurt-based institution has restarted its bond-buying scheme this month.

The ECB seems to be winning this struggle – EUR/USD is generally lower. When the global economy slows down, the safe-haven US Dollar tends to outperform the euro. However, the common currency has been far from collapsing, holding its ground.

Get the 5 most predictable currency pairs
Previous ArticleTop 3 price prediction BTC, ETH, XRP: Microsoft opens its windows to Ethereum and the sky is the limit
Next Article UAE energy minister: Too early to say if OPEC will intensify any oil cuts