Latest
You are at:Home»Forex News»EUR/USD: Sell the rumor, buy the fact? Why US inflation data may trigger a rally

Inflation is coming – perhaps, but it could already be well in the dollar’s price, resulting in traders selling the greenback and potentially sending EUR/USD to new highs.

A dark mood has gripped markets. The main reason is the fear of rising prices that would cause the Federal Reserve to raise interest. A long list of officials at the world’s most powerful central bank has reiterated the message that price rises are “transitory” and would subside after a few months. Investors remain in disbelief.

The considerable increase in China’s producer prices and hawkish comments from Dallas Fed President Robert Kaplan has been the latest to fuel speculation of inflation rearing its head. Concerns about the global chip shortage, soaring commodity prices, and most recently the paralysis of gasoline supplies to the US northeast have added to concerns. To top it off, escalating conflict in the Middle East adds worries and boosts the safe-haven dollar.

Have markets gone too far? The headline Consumer Price Index is set to leap to 3.6%, a multi-year high, while Core CPI – which excludes food and energy – is forecast to advance from 1.6% to 2.3% YoY. Nevertheless, that would put it pre-pandemic levels, when inflation was considered healthy.

It is also essential to note that March’s CPI report provided some relief. Will recent history repeat itself?

After the publication, Fed Vice-Chair Richard Clarida and Atlanta Fed President Raphael Bostic are set to speak. They will likely repeat the bank’s message that inflation is transitory, due to base effects and bottlenecks that are set to subside. That could also calm the mood.

On the other side of the pond, the EU is scheduled to publish new economic forecasts, and they will likely consist of an upgrade to previous projections. Europe’s accelerating vaccination campaign has been boosting investor confidence, as last seen by figures from Germany’s ZEW institute.

On both sides of the pond, the immunization efforts are bearing fruit and crushing the coronavirus wave. The old continent is catching up with its Western world peers. This factor underpins the common currency.

All in all, EUR/USD has reasons to resume its gains. 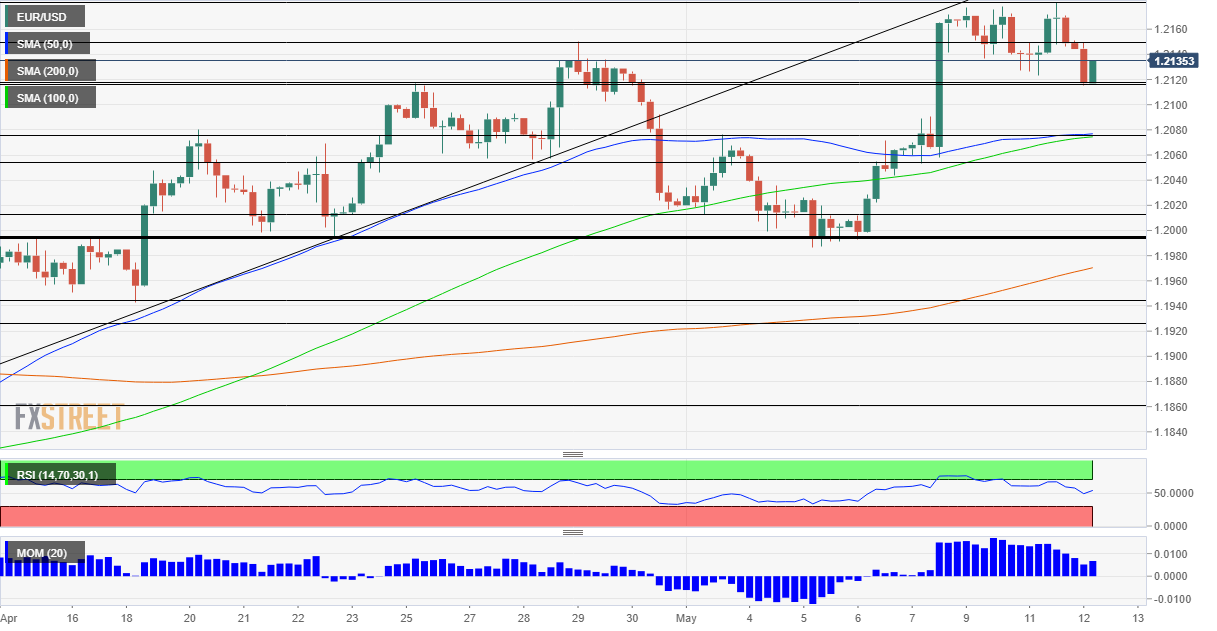 The Relative Strength Index (RSI) on the four-hour chart has drifted down and now maintains a considerable distance from the 70 level – thus remaining far from overbought conditions. Euro/dollar trades above the 50, 100 and 200 Simple Moving Averages (SMAs), and momentum remains to the upside.

Get the 5 most predictable currency pairs
Previous ArticleGold Price Analysis: Disappointing US CPI to revive XAU/USD’s bullish momentum
Next Article USD/CAD risks a breach below 1.20 in the coming weeks – Credit Suisse