Latest
You are at:Home»Forex News»EUR/USD: Selling opportunity? Why Nonfarm Payrolls expectations could be too low

Goldilocks – signs that the US economy is exiting melt-up conditions and entering into a “not too hot, not too cold” scenario may have been premature. Another sign of overheating could boost the dollar as expectations for interest rate hikes could appear.

The ISM Purchasing Managers’ Indexes dropped from multi-year highs and to around 60 points – indicating robust growth, but one in which rising inflation is causing a cooldown. The publications – alongside a miss in ADP’s private-sector labor figures – have contributed to cooling estimates, probably below 978,000 that the economic calendar shows for April’s NFP.

However, April probably saw an extension of two trends that kicked off in March. First, America’s vaccination campaign gained speed in April, prompting governors to remove additional restrictions and to give consumers more confidence. Shopping became easier with Uncle Sam’s stimulus checks that were delivered in late March and spent throughout April.

In the past two months, America gained more jobs than expected, and by a large margin:

Another sign that April’s NFP could beat estimates comes from the White House. President Joe Biden summoned a press conference for 15:00 GMT, to talk about the job figures. The Commander-in-Chief receives the numbers in advance, and he probably wants to take a victory lap.

If America gains significantly more than one million jobs, the dollar could rise on expectations for the Federal Reserve to begin tapering its bond-buying scheme. So far, only Robert Kaplan, President of the Dallas Fed, called for an early discussion on printing fewer dollars. He might be joined by others.

Another figure to watch is wages. Average Earnings are forecast to drop as low-paying jobs will likely be a significant part of the new hirings. Once again, depressed estimates leave more room for an upside surprise.

Apart from the all-important NFP, Europe’s vaccination campaign is gaining speed while America’s is slowing down, eroding the dollar’s advantage. However, Europe is far from experiencing inflationary pressures and will raise rates a long time after the US does.

More US Nonfarm Payrolls April Preview: When the economy booms, it’s all about rates 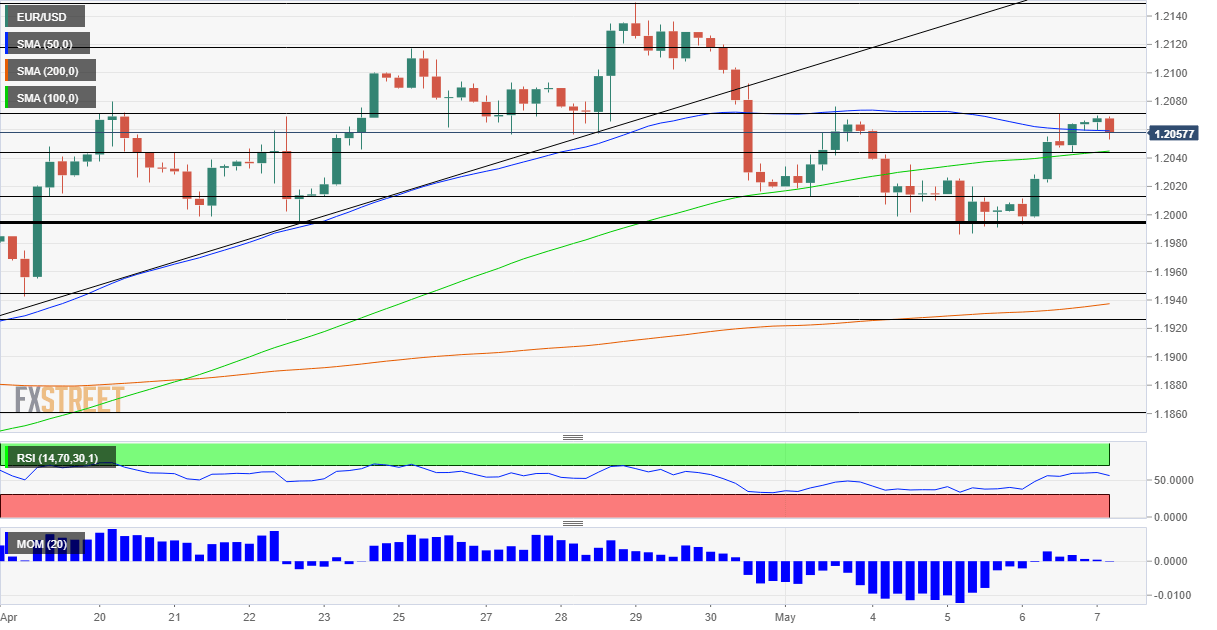 The four-hour chart is painting a mxied picture. While upside momentum has all but disappeared, the currency pair still trades above 50 Simple Moving Average (SMA). The Relative Strength Index is balanced.

Get the 5 most predictable currency pairs
Previous ArticleEUR/USD to advance nicely towards 1.2150, correction is over – Commerzbank
Next Article USD/CAD set to fall towards the 1.2062 2017 low – Credit Suisse