Latest
You are at:Home»Forex News»EUR/USD: So many moving pieces, but little movement

EUR/USD trades slightly below 1.1400, holding the high ground it had reached earlier in the week. There is a lot of news going around, keeping things stable and it can be classified to the good, the bad, and the ugly.

Kim-Trump Summit: While the meeting ended without a deal and described as a “honeymoon cut short,” negotiations are set to continue between the US and North Korea. After the initial worries, markets calmed down. The USD and the JPY initially rose but then slipped back down.

India-Pakistan: Tension between the two South Asian nuclear countries remains high, but there have been no new hostilities, putting the issue on the sidelines, at least for markets.

Powell Put: Fed Chair Jerome Powell said that the balance sheet reduction program could end this year, which is music to markets’ ears. There is still a lot of uncertainty about the topic, but alongside the pledge to be patient on interest rates, markets are happy, and the USD is weaker.

Trade talks: US Trade Representative Robert Lighthizer testified on Wednesday and was quite hawkish. He said that Chinese buying of US goods is not enough to seal a deal. Agreements on structural changes and enforcement are still far. While the US lifted the threat of new tariffs, they may still show up later on. His words weighed on sentiment.

EZ inflation: Initial inflation data for February came out as expected in Spain but below projections in France. Data from the various German states is slightly below forecasts. In any case, prices are not going anywhere fast, and the ECB may alter its guidance as early as next week. This puts pressure on the euro.

Brexit: Markets cheered the upcoming delay in Brexit, from March 29th to sometime early in the summer, but there still is a lot of uncertainty. The state of British politics has become ugly with many Conservative MPS not supporting the government in votes held on Wednesday. The developments also impact the euro and cause choppy trading.

US GDP: After a one-month delay due to the government shutdown, the US publishes GDP data for Q4 2018. A considerable slowdown is on the cards, but by how much? Economists are puzzled by the dire retail sales numbers for December which do not match other figures. Volatility may be quite high.

All in all, the abundance of news results in the absence of action, but things may change with so many factors in play. 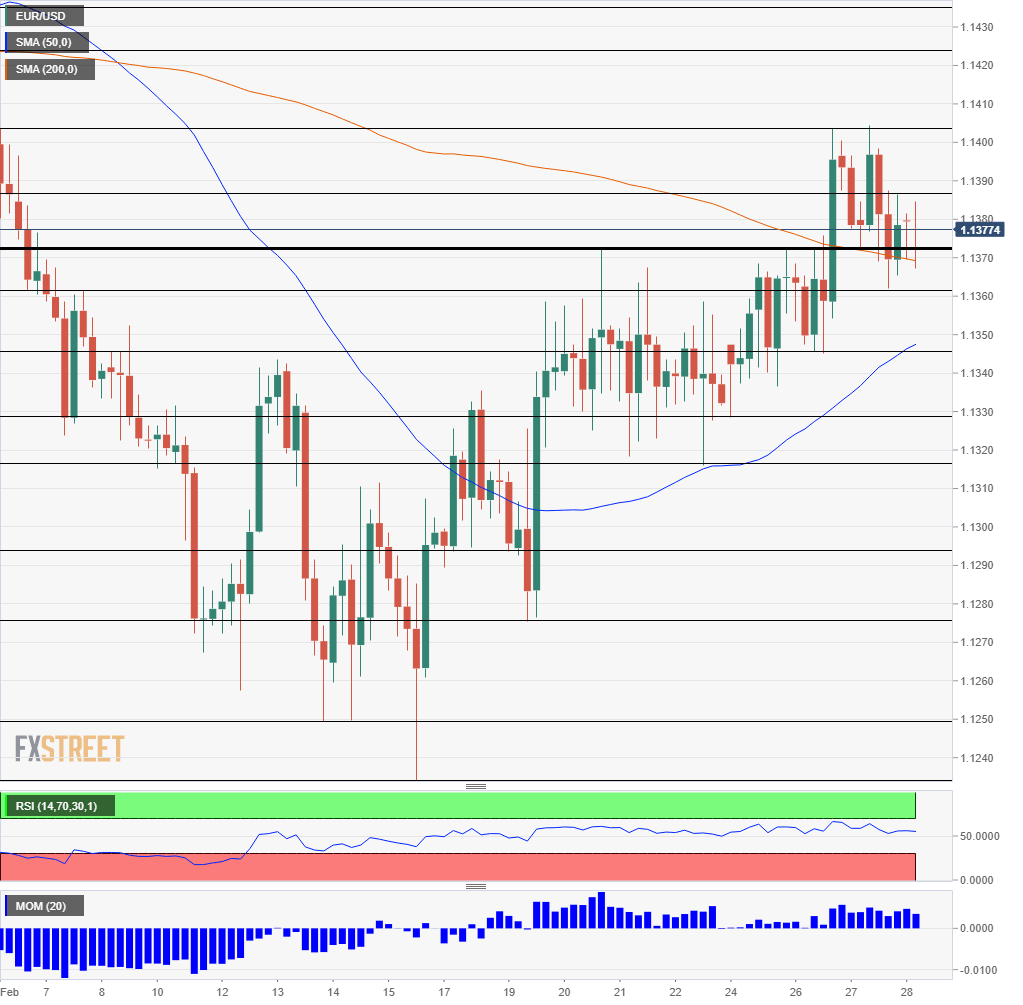 EUR/USD is holding most of the gains, but not reaching for new highs. It dipped below the 200 Simple Moving Average on the four-hour chart but still battles it. Momentum remains upbeat, but the Relative Strength Index is off the highs — all in all, a slightly bullish picture.

Resistance awaits at 1.1385 which capped the pair earlier. More significant resistance is at 1.1405 that held EUR/USD down twice in recent days. 1.1430 and 1.450 demarcated higher trading ranges last seen in January.

Get the 5 most predictable currency pairs
Previous ArticleUBS: GBP/USD to trade around 1.28 and EUR/GBP around 0.90 in 3M
Next Article Gold Technical Analysis: Set-up favors an extension of the intraday positive move