Latest
You are at:Home»Forex News»EUR/USD: Three reasons why the euro is set to resume its gains

New week, new highs? Perhaps not all euro bulls have begun the week with fresh energies, but the world’s most popular currency pair has substantial reasons to rise.

The main upside driver of the dollar has been fear of rising US inflation, which would force the Federal Reserve to taper down its bond-buying scheme and later raise interest rates. The jump in the US Consumer Price Index (CPI) in April and leap in inflation expectations as seen in the University of Michigan’s Consumer Consumer Sentiment Index figures for May. However, America is not alone.

China, the world’s second-largest economy, reported an annual increase of 17.7% in April’s Retail Sales data, substantially below an increase of roughly 25% projected. The Asian giant fueled the rise of commodity prices earlier this century and it pumped stimulus in the wake of the 2008 financial crisis. This time is different.

There is no commodity “supercycle” without China – a rethink about inflation could embolden doves at the Fed and soften the hawks. Federal Reserve Vice-Chair Richard Clarida and several of his colleagues are set to speak out later in the day and they will likely repeat their message that inflation is transitory. That could weigh on the dollar.

2) European shots in the arm

The old continent has been accelerating its vaccination campaign, reaching over a third of the population with at least one dose. Moreover, the campaign is bearing fruit, pushing infections sharply lower: 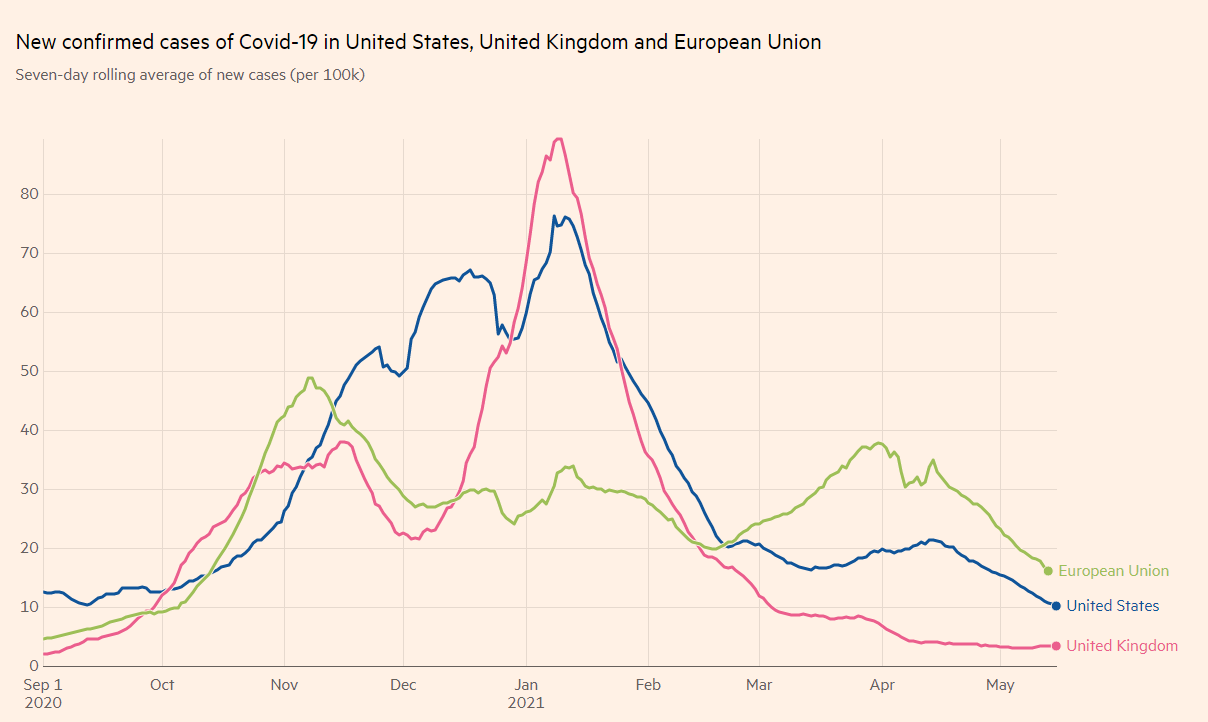 That is allowing countries to open up and visitors from abroad to revive the beaten tourism industry. The easing of restrictions in the UK — which now allows its citizens to fly abroad – is another piece of good news for Europe.

Is EUR/USD setting lower highs or higher lows? That is in the eyes of the beholder – but the four-hour chart is showing that momentum has turned positive. Moreover, the currency pair trades above the 50 and 100 simple moving averages (SMAs). All in all, bulls are in control.