Euro/dollar  traded in a limited range as the markets received mixed news and still await a formal Spanish aid request. Spain will hold a closely watched bond auction that will serve as a barometer for the crisis. In addition, PMI figures will also get attention.  Here is an outlook for the upcoming events and an updated technical analysis for EUR/USD.

The French economy managed to escape contraction, and Germany posted nice growth. On the other hand, an important German survey was rather depressing. Greece will easily meet the August 20th obligations using the revolving door trick by the ECB, but now faces firm German opposition for its requests for more money and more time.

Updates: There are no scheduled releases on Monday.  A report that  the ECB will set a cap on bond yields has supported Spanish bonds. The euro is dropping and is testing the 1.23 line. EUR/USD was trading at 1.2308. There are no releases scheduled on Tuesday. The euro benefited from rising speculation the the ECB will cap Euro-zone bond yields, despite a cataegorical denial by the ECB. The euro continues to rise, as EUR/USD was trading at 1.2434. It’s another quiet day, as there are no scheduled releases on Wednesday. The markets will be waiting for  US Existing Home Sales and the FOMC Meeting Minutes.   Greek Prime Minister Samaras will meet with Euro-zone chief Jean-Claude Juncker in Athens. The Greek PM is expected to request a two-year extension to the Greek austerity package. The euro has lost some ground, as EUR/USD was trading at 1.2447. The euro continues to push upwards, as a host of PMI releases were mostly positive. German Final GDP came in at 0.3%, matching the forecast. French Flash Manufacturing PMI posted a reading of 46.2 points, well above the forecast of 43.7. French Flash Services PMI hit 50.2, just above the estimate of 50.0. German Flash Manufacturing PMI came in at 45.1, above the forecast of 43.5. German  Flash Services PMI disappointed, posting 48.3. The estimate stood at 50.1.  Euro-zone Flash Manufacturing PMI posted 45.3, beating the forecast of 44.2. Euro-zone Flash  Services PMI came in at 47.5, a notch below the estimate of 47.7 points. Euro-zone Consumer Confidence will be released later on Thursday. The markets are braced for a very weak release. The euro also received a boost from the minutes of the most recent Fed policy meeting, where the  Fed indicated that it remains supportive of more stimulus measures unless the economy shows signs of expansion. EUR/USD was trading at 1.2547. 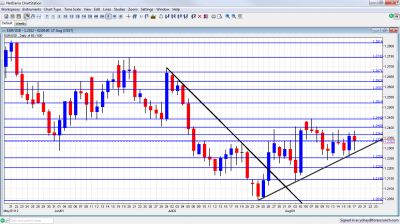 â‚¬/$ started the week on low ground and then moved higher, but couldn’t break above the critical 1.24 level (mentioned last week). It then retreated and fell to just above 1.2250 before recovering.

An uptrend support line can be seen on the graph. IT supports the pair since mid July and was challenged quite recently. The broken downtrend resistance remains on the graph. These lines are both bullish.

Will we finally see a Spanish aid request? Two weeks have passed since Rajoy hinted about the move. Markets grew nervous and now optimistic once again. A formal request will boost the euro, that will forget the European economic squeeze  and Greece, which is on the back burner until September. Without a Spanish request, the euro will likely drift in range and slide a bit.

In the US, signs remain mixed, but there is a clear distinction between the weak manufacturing sector and the improving housing sector. Employment is OK for now.

Euro/dollar  traded in a limited range as the markets received mixed news and still await a formal Spanish aid request. Spain will hold a closely watched bond auction that will serve as a barometer for the crisis. In addition, PMI figures will also get attention.  Here is an outlook for the upcoming events and an updated technical analysis for EUR/USD.     The French economy managed to escape contraction, and Germany posted nice growth. On the other hand, an important German survey was rather depressing. Greece will easily meet the August 20th obligations using the revolving door trick by the…