Euro/dollar  reached higher resistance but couldn’t follow through, as Spain didn’t follow through and submit an aid request.   GDP figures for France and Germany as well as a major German survey are the highlights of this week. Here is an outlook for the upcoming events and an updated technical analysis for EUR/USD.

Doubts about the hinted Spanish aid request crept into the markets, as time passed by and Spain didn’t budge. Talk about growing German opposition to potential ECB bond buys and the uncertainty about Greece continue to haunt markets, especially as the head of the Eurogroup Juncker slipped a remark about Greece staying in the zone “at least until the autumn”. Positive data from the US certainly helped the other side of the pair.

Updates: German WPI posted a gain of 0.3%, beating the forecast of a flat 0.0%. This is a welcome sign of inflation in the German economy, indicating  a slight  increase in economic activity. The markets are waiting for Tuesday’s GDP figures out of France, Germany and the  Euro-zone. The euro flexed some muscle to start the trading week, easily pushing across the 1.23 line. EUR/USD was trading at 1.2351. The markets were pleased with German Preliminary GDP, which rose 0.3%. This was slightly above the estimate of 0.2%. French Preliminary Non-Farm Payrolls declined -0.1%, matching the market forecast. German ZEW Economic Sentiment was a major disappointment, as the indicator fell to -25.5 points, its worst reading in 2012. The market estimate stood at -19.4 points. Euro-zone GDP (first reading) posted a loss of 0.2%, matching the estimate. Euro-zone Industrial Production dropped 0.6%, slightly more than the -0.5% prediction. Euro-zone ZEW Economic Sentiment improved to -21.2 points, but still fell short of the market estimate, which stood at -19.1 points.  Greece’s GDP contracted  in Q2 at annual rate of  6.2%, beating the estimate of  a 7%  decline.  EUR/USD has lost some ground, as the pair was trading at 1.2344. The euro  continues to drop  following the release of strong US retail sales.   Greece raised 4.063 billion euros in a government auction of three-month bonds, with a respectable yield of 4.43%. The sale was much larger than the previous one, and provides crucial funds as the country prepares to make a 3.2 billion euro bond repayment to the ECB later this month as part of the bailout package. The euro has dropped below the 1.23 line, as EUR/USD was trading at 1.2273. Euro-zone CPI jumped 2.4%, and Core CPI was up 1.7%. Both figures matched the market estimates. EUR/USD is choppy, as the pair was trading at 1.2283. 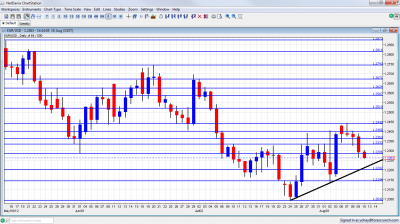 â‚¬/$ started the week with a move higher, but found resistance at the 1.2440 line (mentioned last week). It then began deteriorating, finding support at 1.2330, before falling to lower ground.

Further below, 1.2330 is another historical line after being the trough following the global financial meltdown in 2008. It’s stronger after working as strong support. It should be closely watched if the pair falls. The now previous 2012 low of 1.2288 is now minor support.

As the graph shows, the pair is trading above uptrend support that was formed from mid July.

The slow pace of events in Europe takes its toll on the single currency. Draghi did take a big step forward with an offer for full QE, but Spain probably needs another round of deterioration and more time for the public to prepare before it submits a formal aid request. Spain is also moving slowly, after hinting about such a request, and in the meantime, things are getting worse.

A Greek exit in 2012 is certainly on the cards (see  how to trade the Grexit with EUR/USD), but the debt struck country will likely pass the upcoming hurdle of an August 20th bond repayment to the ECB: the ECB will help Greece pay the ECB, and this is supportive for the euro.

In the US, calls for QE from  Eric Rosengren were countered by positive data, and the QE3 debate will likely be on hold this week.

Euro/dollar  reached higher resistance but couldn't follow through, as Spain didn't follow through and submit an aid request.   GDP figures for France and Germany as well as a major German survey are the highlights of this week. Here is an outlook for the upcoming events and an updated technical analysis for EUR/USD.     Doubts about the hinted Spanish aid request crept into the markets, as time passed by and Spain didn't budge. Talk about growing German opposition to potential ECB bond buys and the uncertainty about Greece continue to haunt markets, especially as the head of the Eurogroup…