EUR/USD had a roller coaster week, ending 2013 on high ground only to crash in the wake of 2014. What’s next? The ECB rate decision is all important, especially Draghi’s press conference. In addition, service PMIs, German inflation data, retail sales,  employment data will move markets. Here is an outlook on the interesting events ahead.  Here is an outlook on the major events at the year’s end and the beginning of 2014 and an updated technical analysis for EUR/USD

According to the confirmed manufacturing PMIs, Germany and France continue to diverge, with the former expected to grow nicely and the latter to squeeze. Spanish data released last week posted a great  start to 2014. Unemployment claims plunged by 107.6 thousand. In the US, data has been quite good, enabling the comeback of the dollar after retreating on thin volume in late 2013. The pair broke below long term uptrend support and stopped only before the week ended.  Let’s start: 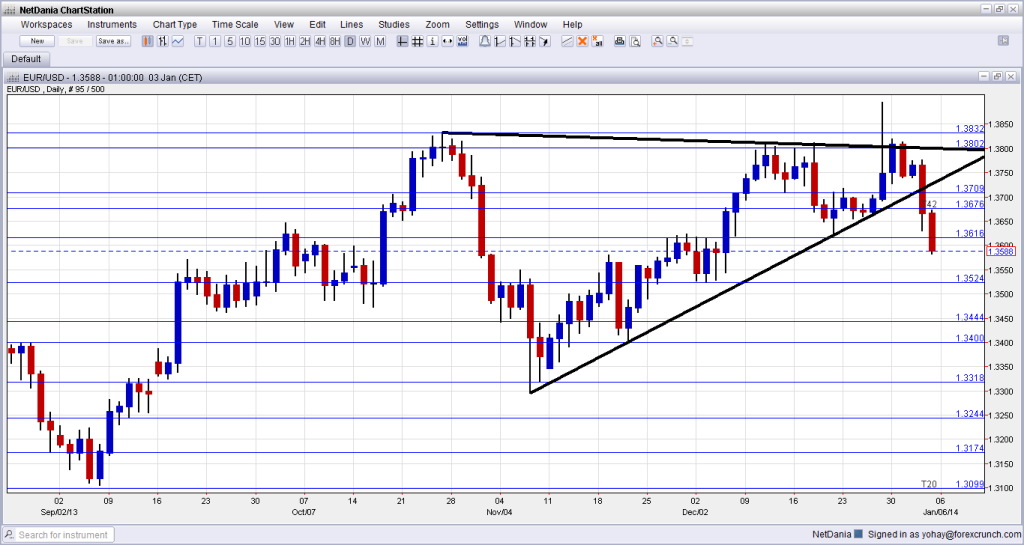 Euro/dollar began the week with an attempt to recapture the 1.3830 line (mentioned last week). The failed attempt proved that the Christmas surge was indeed a false break. From there, it was all downhill, with a short lived recovery attempt that stalled at 1.3675 in a perfect manner. After losing uptrend support, the pair stopped only at 1.3588.

1.3832 was the 2013 peak (excluding the post-Christmas break). The failure of the pair to get close to this line for a second time might make it a top for a long time, despite the false break. 1.38 is a round number and also worked as a temporary cap during that period of time and also in October 2013.

1.3710  was the previous 2013 peak, and served as a clear separator. The pair needed a big trigger to break above this line, and when it lost it again, the fall was painful. 1.3675 capped the pair in December and also provided some support back in October. It also stalled a recovery in January 2014.

1.3615  worked as resistance in December, as an upper bound for the range. It is followed by 1.3525, which was the lower bound during this period and also had the opposite role in early 2013.

1.3440 worked as a clear separator in early November 2013 and is a key line to the upside.  The round number of 1.34 worked as resistance several times in 2013, and is strengthening now.

1.3320  worked as a double top in early September and it was crossed only with a Sunday gap. It remains a clear separator of ranges.  It is followed by 1.3240, which capped the pair in April and also had a role in August. It worked as support in September.

1.3175  capped the pair during July 2013.  1.3100  is worked as temporary resistance in December 2012 and is becoming more important once again, after capping a recovery attempt in June and then in July and providing support in September.

From early November, the pair trended higher, riding above an uptrend support line. As mentioned last week, it was hard for the pair to hold onto the line for too long. The break below was certainly painful. The downtrend black thick line emphasizes the lower high the pair reached: from 1.3830 in October to 1.38 in December, and was respected.

The holidays are over and reality is back in town. Tighter credit conditions in the euro-zone are weighing on growth and could send the area back to recession. Deflation is still possible, despite denials. Draghi could now paint a more worried picture for 2014 and make bigger hints of action. A negative interest (certainly a possibility in Q1) could become a more serious threat.

In the US, positive signs continue into 2014. Non-Farm Payrolls could give the greenback another boost and raise expectations of an accelerated taper. The breakdown of support and the return to the lows seen in December are also a warning sign.

If you are interested a different way of trading currencies, check out the  weekly binary options setups, including EUR/USD and more.

EUR/USD had a roller coaster week, ending 2013 on high ground only to crash in the wake of 2014. What's next? The ECB rate decision is all important, especially Draghi's press conference. In addition, service PMIs, German inflation data, retail sales,  employment data will move markets. Here is an outlook on the interesting events ahead.  Here is an outlook on the major events at the year's end and the beginning of 2014 and an updated technical analysis for EUR/USD According to the confirmed manufacturing PMIs, Germany and France continue to diverge, with the former expected to grow nicely and the…