EUR/USD suffered a downfall at the end of busy week that saw the dollar surge across the board. Will the pair continue lower? German ZEW Economic Sentiment and GDP figures are the highlights of this week.  Here is an outlook on the events and an updated technical analysis for EUR/USD, now on lower ground.

German Industrial  Production hit a ten-month high, climbing 1.2% in March. This positive reading was accompanied by another pleasant surprise; German manufacturing orders continued to impress with a 2.2% jump, contrary to the -0.4% forecast. However, this was not enough to break higher. Better than expected jobless claims in the US triggered resulted in USD/JPY breaking the 100 line. This snowballed into an all-out USD surge and the euro was certainly not immune, going back to levels seen a month earlier.

Updates: More talk about negative rates from ECB’s Visco weighed on the euro, and also the dollar rally didn’t really stop. Fresh technical analysis for the pair:  EUR/USD Stalls Decline around 200-Day Moving Average. The Eurozone finance ministers met on Monday, with the EU finance ministers are meeting on Tuesday. German numbers were a major disappointment. Final CPI declined 0.5%, matching the estimate. WPI declined as well, dropping 0.2%. This edged past the estimate of -0.3%. German ZEW Economic Sentiment, one of the most important German indicators, came in at 36.4 points, well below the estimate of 39.5 points. Eurozone numbers were better, as Industrial Production rose 1.0%, beating the forecast of 0.6%. Eurozone ZEW Economic Sentiment came in at 27.6 points. The estimate stood at 27.3 points. EUR/USD has edged lower after the weak German data, as the pair was trading at 1.2974.  Wednesday: France entered an official recession (GDP marginally worse than expected) and  Germany badly disappointed with very low growth – this sent the euro lower. Support at 1.2880 is eyed. The euro-zone as a whole contracted by 0.2% in the first quarter, making it the 3rd consecutive month of contraction. 1.2880 holds for now. French Preliminary Non-Farm Payrolls dropped 0.1%, better than the estimate of -0.3%.  Italian Trade Balance came in at 32.4 billion euros,  beating the estimate of 1.72 billion. Eurozone Trade Balance  sparkled, posting a surplus of 18.7 billion euros. The estimate stood at 11.8 billion euros. Eurozone CPI rose 1.2%, while Core CPI rose 1.0%.  Both figures matched the forecast. EUR/USD  is testing the 1.29 line. The  pair was trading at 1.2899. The euro was hit by a comment from an EC vice-president that the ECB should manage the euro lower. The single currency failed to ride on weak data from the US. EUR/USD is trading under 1.2880. Update: More talk of negative rates joined other issues and EUR/USD finally broke lower towards 1.28. Here are 4 reasons for the downfall of euro/dollar. 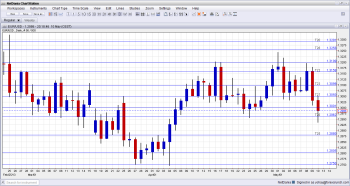 Euro/dollar started the week with a drop to the 1.3050 linebefore making its way up and eventually challenging the 1.32 line  (mentioned  last week). From there, it was all downhill. The big fall saw the pair trade between 1.30 and 1.3050, before a second round sent it lower.

Below, 1.3290 served as resistance before the pair collapsed in 2012, After many failures to break higher, the euro finally pushed through.  1.3255 provided support during January 2013 and also beforehand. A recovery attempt failed to reconquer this line.

1.3100 is a minor line after working as temporary resistance in December 2012. It is followed by 1.3050, which proved be strong support in May 2013, defending the round number in more than one occasion, and also working as resistance.

The very round 1.30  line  was a tough line of resistance for the September rally. In addition to being a round number, it also served as strong support. It served as a pivotal line of late.  1.2960  provided some support at the beginning of the year and also in September and October – the line is strengthening once again after working as a triple bottom. It remains an important line on the downside. The breach in May was not confirmed.

Draghi didn’t throw the  hint on negative rates  just once, but reiterated his call. This continues weighing on the euro, despite improvement in German numbers. And while the Japanese QE blitz also sends money into Europe, it sends more money to the US.

EUR/USD suffered a downfall at the end of busy week that saw the dollar surge across the board. Will the pair continue lower? German ZEW Economic Sentiment and GDP figures are the highlights of this week.  Here is an outlook on the events and an updated technical analysis for EUR/USD, now on lower ground. German Industrial  Production hit a ten-month high, climbing 1.2% in March. This positive reading was accompanied by another pleasant surprise; German manufacturing orders continued to impress with a 2.2% jump, contrary to the -0.4% forecast. However, this was not enough to break higher. Better than expected…