EUR/USD had an exciting week, especially around the rate decision, that saw wild action. Mario Draghi will have another opportunity to rck the markets with a scheduled speech and there are quite a few other interesting events.  Here is an outlook for the main events and an updated technical analysis for EUR/USD.

The  ECB cut the rates by 0.25%  and left the deposit rate unchanged at 0%.  This pushed the euro higher. However, during the press conference, Draghi hinted heavily about a negative deposit rate and  sent the euro crashing. In the US, the employment report came out better than expected (especially the revisions) and after an initial negative reaction in EUR/USD, the pair enjoyed risk appetite and recovered. We certainly had a nice share of volatility. Will the action continue?  Let’s Start

Updates: Spanish Unemployment Change was superb, dropping by 46.1 thousand. This blew away the estimate of a gain of 17.1 thousand.   Spanish Services PMI dropped to 44.4 points, missing the estimate of 45.8. Italian Services PMI came in at 47.0, better than the estimate of 46.3. Eurozone Final Services also improved to 47.0, beating the forecast of 46.6. Eurozone Sentix Investor Confidence rose to -15.6 points, but this fell below the estimate of -14.6. Eurozone Retail Sales declined by 0.1%, matching the forecast. ECB President Mario Draghi spoke in Rome. He reiterated that the ECB was open to further rate cuts and to negative deposit rates. French Industrial Production declined by -0.9%, well off the estimate of -0.2%. The French Government Budget deficit increased to 31.0 billion euros. The French trade deficit narrowed to 4.7 billion euros, beating the estimate of 5.3 billion euros. The markets were pleased with German Factory Orders, which gained 2.2%. The estimate stood at -0.4%. EUR/USD has edged higher, crossing above the 1.31 line. The pair was trading at 1.3114. French and German markets are closed on Thursday for a holiday. German Industrial Production looked sharp, jumping 2.2%. The estimate stood at -04%. The ECB released its Monthly Bulletin. EUR/USD has edged lower, as the pair was trading at 1.3133. Friday: the euro is under pressure after the dollar stormed the board and USD/JPY broke above 100. EUR/USD is pressured to the 1.30 line. 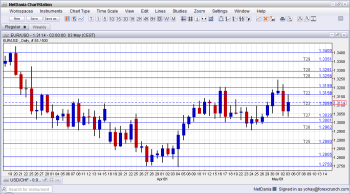 Euro/dollar began the week climbing on top of the 1.3030 line . It then surged higher and even briefly breached the 1.32 line (mentioned last week). On Thursday, it had a huge downfall finding support at 1.3030 once again. More choppy trading saw another challenge of 1.3030.

Below, 1.3290 served as resistance before the pair collapsed in 2012, After many failures to break higher, the euro finally pushed through.  1.3255 provided support during January 2013 and also beforehand. A recovery attempt failed to reconquer this line.

The very round 1.30  line  was a tough line of resistance for the September rally. In addition to being a round number, it also served as strong support. It served as a pivotal line of late.  1.2960  provided some support at the beginning of the year and also in September and October – the line is strengthening once again after working as a triple bottom. It remains an important line on the downside.

The ECB acknowledged the worsening situation and cut the rates. With the hint on negative rates, the pressure on the euro could continue. This joins the various debt-crisis related issues in the old continent.

In the US, the Fed showed little willingness to add more QE, and recent data was certainly a relief: not only does the US continue gaining jobs, the disappointing data seen earlier was significantly revised to the upside.

EUR/USD had an exciting week, especially around the rate decision, that saw wild action. Mario Draghi will have another opportunity to rck the markets with a scheduled speech and there are quite a few other interesting events.  Here is an outlook for the main events and an updated technical analysis for EUR/USD. The  ECB cut the rates by 0.25%  and left the deposit rate unchanged at 0%.  This pushed the euro higher. However, during the press conference, Draghi hinted heavily about a negative deposit rate and  sent the euro crashing. In the US, the employment report came out better than…