EUR/USD suffered a second week of significant falls after euro-zone figures disappointed and the dollar kept advancing. Is the pair ready to recover or are we going to see more drops? Flash PMI’s and German Ifo Business Climate are the highlights of this week. Here is an outlook for the main events and an updated technical analysis for EUR/USD.

Eurozone economic data was hit by a constant flow of disappointing GDP numbers,  dragging the 17-country currency bloc to its longest-ever recession. Germany the leading force in Europe failed to meet market expectations, growing a mere 0.1% in March. France contracted 0.2% in March and officially fell back to recession. The EU as a whole declined by 0.2%. Is the recovery awaiting us in H2 as the ECB estimates? In the meantime, the central bank continues to check out the possibility of a negative deposit rate, and this weighs on the euro. In the US, data hasn’t been all rosy, but the economy continues growing.

Updates: EUR/USD is slightly recovering on thin volume. Germany and France are observing a holiday. 1.2880 clearly caps the pair. Pressure on the euro persists, and the currency continues to lean towards a bearish trend resumption.  Euro/dollar is now above resistance of 1.2880, riding on the not-enough hawkish statements from FOMC dove Charlie Evans. Without new hints about tapering QE, the dollar corrected. German PPI declined by 0.2%, missing the estimate of -0.1%. This marks another disappointing German indicator, as the largest economy in the Eurozone continues to struggle. EUR/USD continues to struggle, as the pair was trading at 1.2870. The markets will  be keeping a close eye on the US Federal Reserve, as Bernard Bernanke testifies  before a Congressional committee  on Wednesday.  An updated technical analysis by James Chen:  EUR/USD Leaning towards Bearish Trend Resumption. The last FOMC speakers before Bernanke takes center stage didn’t talk about tapering QE, and the dollar lost ground. Later on, the dollar managed to recover against most currencies, but the euro held strong above 1.29. A strong current account number helped.  German 10-year bonds posted an average yield of 1.41%. This was higher than the previous auction, which had a yield of 1.28%.

Ben Bernanke triggers a big drama:    at first,  he stated that it would be premature to withdraw stimulus as this would hurt the recovery, and the USD dropped. However, when asked,  Bernanke mentioned that the Fed could taper, and the dollar rallied hard. EUR/USD initially climbed above resistance at 1.2960 and peaked at 1.2997, just below resistance at 1.30. And then, the pair collapsed down to challenge support at 1.2880. The euro managed to stabilize and trades at lower ranges. PMIs came out more or less within expectations, with France showing significant contraction (around 45) and Germany showing small contraction (around 49.5 points). See how to trade the German IFO Business Climate with EUR/USD.    Italian Retail Sales looked weak, posting its third consecutive decline. The indicator dropped 0.3%, well off the estimate of a 0.3% gain. Eurozone Consume Confidence will be released later on Thursday, and ECB President will speak at an event in London. EUR/USD has moved higher, crossing the 1.29 line. The pair was trading at 1.2910.

The euro is unable to capitalize on the German numbers, and marks 1.30 as a double top this week. EUR/USD ends the week at 1.2934, higher in the range. The fresh EUR/USD weekly forecast for the week beginning on May 27th will be published soon. 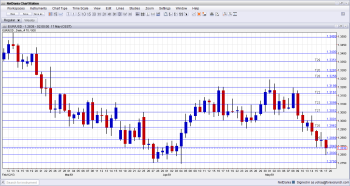 Euro/dollar began the week trading above the 1.2960 level (mentioned last week). It then dropped to lower ground, trading between 1.2840 and 1.2890. An attempt to recover didn’t succeed and the pair eventually broke lower, eventually closing at 1.2838.

We start from lower ground this time. 1.3290 served as resistance before the pair collapsed in 2012, After many failures to break higher, the euro finally pushed through.  1.3255 provided support during January 2013 and also beforehand. A recovery attempt failed to reconquer this line.

1.3100 is a minor line after working as temporary resistance in December 2012. It is followed by 1.3050, which proved be strong support in May 2013, defending the round number in more than one occasion, and also working as resistance.

The very round 1.30  line  was a tough line of resistance for the September rally. In addition to being a round number, it also served as strong support and recently worked as a pivot line. 1.2960  provided some support at the beginning of the year and also in September and October – the line is now weaker after the break lower.

Lower,  1.2890  worked in both directions during 2012 and was the beginning of the uptrend support line. The recent breakdown turned the line into strong resistance.  1.2840 worked as a cushion for the pair during May 2013 and is a pivotal line at the moment.

The weak GDP numbers confirm the economic weakness of the euro-zone once again. Adding the incessant talk about negative rates and even the call for the ECB to “manage the euro lower“, and we have a recipe for more euro weakness. Only the Japanese ignited flows to peripheral bonds support the euro.

In the US, some figures are better, and some are worse. Yet all in all, the economy is growing and there are more signs that the Fed might change course: Williams, a dove on the Fed, began talking about unwinding QE, beginning this summer. Talk about an end to QE is certainly dollar positive.

AUD/USD: Where next after the collapse? A look at the

EUR/USD suffered a second week of significant falls after euro-zone figures disappointed and the dollar kept advancing. Is the pair ready to recover or are we going to see more drops? Flash PMI's and German Ifo Business Climate are the highlights of this week. Here is an outlook for the main events and an updated technical analysis for EUR/USD. Eurozone economic data was hit by a constant flow of disappointing GDP numbers,  dragging the 17-country currency bloc to its longest-ever recession. Germany the leading force in Europe failed to meet market expectations, growing a mere 0.1% in March. France contracted…

USD/JPY Forecast: Probable Policy Shift by BoJ on the Rise