Euro/dollar  lost ground for a second week in a row, as Spain’s issues worsened. Also Greece isn’t doing that well, and the global slowdown also takes its toll. The upcoming week is the first for the last quarter of the year, and it features many events. The rate decision is the most important one. Here is an outlook for the upcoming events and an updated technical analysis for EUR/USD.

Spain was the epicenter of the crisis once again: the new austerity budget is expected to be sufficient and prevent new measures when the bailout request will finally be made. The bank stress tests showed a need for 59.3 billion euros – not a scary number. However, Germany, the Netherlands and Finland backed down from an agreement that recapitalizes the banks directly using the ESM. The banks could still be a burden on the Spanish state. Regarding an agreement between Greece and its creditors, there is still a lot of uncertainty, with conflicting reports of progress and of troubles in the talks. How will this end?

Updates: The Euro-zone Unemployment Rate matched the forecast, edging up to a record 11.4%. Spanish Unemployment Change surged, posting a seven-month high. The indicator came in at 79.6 newly unemployed persons. Euro-zone PPI climbed 0.9%, exceeding the estimate of 0.6%. Spanish Manufacturing PMI showed little change, coming in at 44.5 points. Italian Manufacturing PMI was up nicely, posting a figure of 45.7 points. The estimate stood at 44.1 points. Italian Monthly Unemployment Rate came in at 10.7%, just below the forecast of 10.8%. Final Manufacturing PMI edged up to 46.1 points,  a notch above  the estimate of 46.0. Spanish Services PMI dropped sharply, falling to 40.2 points. It was the index’s lowest reading in 2012. Italian Services PMI came in at 44.5 points, above the estimate of 43.6. Euro-zone Final Services PMI fell to 46.1 points, very close to the estimate. Euro-zone Retail Sales rebounded into positive territory, posting a modest gain of 01.%. The market forecast stood at -0.1%. The Spanish bailout rumor mill continues, as  Spanish PM Mariano Rajoy was forced to dismiss a media report that Spain would ask for  aid this weekend. The French 10-y Bond Auction posted a yield of 2.28%, up slightly from the previous auction which recorded a yield of 2.21%. As expected, the ECB mantained its Minimum Bid Rate at 0.75%. ECB President Draghi refrained from making any major announcements. The improving euro is testing 1.30, as EUR/USD was trading at 1.2991. German Factory Orders and the Euro-zone Final GDP will be released on Friday. 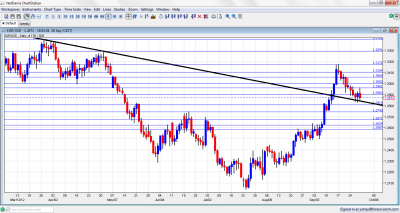 After some choppy trading, â‚¬/$ rose but couldn’t breach the 1.2960 line (mentioned last week). After a drop, a second attempt failed to break this line, and the pair eventually ends the week on lower ground.

The very round 1.30 line was a tough line of resistance for the September rally. In addition to being a round number, it also served as strong support. It is now becoming more pivotal. It is closely followed by 1.2960 which provided some support at the beginning of the year and also in September.

1.29 is a round number that also provided support when the euro was tumbling down back in May. 1.2814 was the peak of a recovery attempt in May and also capped the pair in September 2012.

The line starting from February at the 1.3486 peak was formed in March and April. The rally sent the pair surging through this level, as the graph shows. The pair flirted with this line again and again, and a convincing break below this line could start an avalanche.

The situation in Spain has worsened significantly. The new austerity measures will hurt the economy and raise social tensions, which are already at heightened levels as seen in violent protests in Madrid and the Catalan strive for independence. However, there is no carrot: the de-facto abandonment of the direct banking recapitalization scheme by the northern countries just adds to the burden.

In addition, no big breakthrough is expected with Greece this week, and the Chinese slowdown is also aiding the dollar. While US figures remain mediocre and even slightly  recessionary, and despite QE-infinity, the greenback remains a safe haven currency.

Euro/dollar  lost ground for a second week in a row, as Spain's issues worsened. Also Greece isn't doing that well, and the global slowdown also takes its toll. The upcoming week is the first for the last quarter of the year, and it features many events. The rate decision is the most important one. Here is an outlook for the upcoming events and an updated technical analysis for EUR/USD.     Spain was the epicenter of the crisis once again: the new austerity budget is expected to be sufficient and prevent new measures when the bailout request will finally be…