Euro to dollar is struggling together with the Spanish and Italian bonds. The  hangover from the European summit  continues. The upcoming week consists of many events, with Trichet’s post-rate press conference being the highlight. Will we see a softer stance on inflation? Here is an outlook for the events that will rock the euro, and an updated technical analysis for EUR/USD.

Update Wedensday, 13:00 GMT:  The euro manages to recover some of its losses on a weaker Swiss franc and better retail sales.

Update Monday, 22:00 GMT: Euro/dollar is lower on global worries coming from a slowing US economy, and on higher Spanish and Italian yields specifically. The euro isn’t able to enjoy a falling dollar.

After the initial euphoria, the markets began digesting the results of the summit. The achievements are limited: an insufficient debt relief for Greece and no details about the “Marshall Plan”. In addition, the preventive powers given to the bailout fund are not open ended, and will likely come into effect in many months to come. All this pushed Italian and Spanish yields higher, and the euro lower, even as the debt ceiling crisis in the US continued weighing on the greenback. All these themes are set to continue. Let’s start: 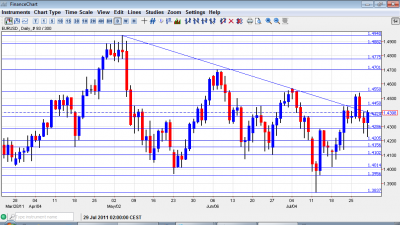 After a slow start to the week, euro/dollar moved higher and traded between the 1.4450 and 1.4550 lines (discussed last week). This didn’t hold for too long, and the pair pushed lower before recovering and closing just under 1.44, marginally higher than last week.

Technical levels, from top to bottom

In case that the euro runs higher, 1.4940 is the highest level this year, and currently the final frontier. Minor resistance is at 1.4882, a peak that later worked as support.

1.4775 is a significant line in high ground, after being pivotal when the pair traded there. 1.47 follows as a minor line.

1.4650 was a peak in the past and is minor resistance. 1.4550 is already a stronger line beneath. It worked perfectly in the past week, and is a key level for an upside run.

The resistance line of 1.4450, which was an important line in the past, and had different roles beforehand is now of very high importance, after the pair bounced towards it.  1.4375 provided support after the big rally for many hours, but remains fragile. It is the initial support line for now.

The peak of November 2010 at 1.4282 is somewhat losing its charm, and works better as resistance than as support. 1.42 managed to cap recent rises, and is also a round number, serving as minor support now.

1.4160 is now a pivotal line, where the euro traded around recently. Moving lower, the round number of 1.41 provides weak support.

Just above the round number of 1.40, we find very important support at 1.4030 – even though the pair dipped through this line several times.  Lower, 1.3950 was a pivotal line when the pair traded in lower ranges and proved that it is of high importance. After the comeback, this line was another clear support line.

The bottom of 1.3838 will be closely watched in another fall. This was also a line of support last year.

Downtrend resistance has been broken in the past week, but this was temporary. Therefore, it has a weaker role than beforehand, but it should still be watched.

I turn from neutral to bearish on EUR/USD.

Even as the debt ceiling mess in the US weighs heavily on the dollar, the euro finds it hard to rise. The decisions made in Brussels won’t come into effect soon, and the markets have no patience. Spain is now in the limelight with high yields, and a credit rating warning (as expected). Even Deutsche Bank is ditching Spain. And Italy isn’t doing much better. Even if the dollar continues tanking, the euro is likely to stay behind.

Euro to dollar is struggling together with the Spanish and Italian bonds. The  hangover from the European summit  continues. The upcoming week consists of many events, with Trichet's post-rate press conference being the highlight. Will we see a softer stance on inflation? Here is an outlook for the events that will rock the euro, and an updated technical analysis for EUR/USD. Update Friday, 7:00 GMT: Trichet gave the euro a big blow, with very limited action in the bond markets. Global stock markets and commodities also plunge. Update Wedensday, 13:00 GMT:  The euro manages to recover some of its losses…