Euro/dollar  fell to critical support but made a huge comeback. While Draghi disappointed markets with no immediate action, he opened the door to full QE and is now waiting for Spain to walk through. Spain took a big step. Is this a significant positive change in the debt crisis? Many problems still remain.  The upcoming features Italian GDP and important German figures. Here is an outlook for the upcoming events and an updated technical analysis for EUR/USD.

Contrary to previous performances, Draghi was not at his best and the absence of bond buying from the only factor able to act was disappointing. Nevertheless, the readiness to buy bonds without sterilization and the fact that only Germany opposed the move and not other northern countries, is definitely worth noting. Before acting, internal ECB committees need to work and more importantly, countries have to ask for aid. This U-turn is very hard for the Spanish government, but for a change, they didn’t reject this option – this is a big step forward. Will the ECB take the extra step and help Greece? Perhaps that’s too much to ask.

Updates: Sentix Investor Confidence dropped for the fifth straight month, posting a reading of -30.3 points. This was the indicator’s worst release since July 2009. The poor reading indicates deep pessimism among investors and analysts, which does not bode well for the euro. After pushing above the 1.24 line on the weekend, EUR/USD retraced.  The pair was trading at 1.2355. Italian Industrial Production disappointed, posting a 1.4% decline. The market estimate stood at -1.0%. Italian Preliminary GDP contracted by 0.7%, matching the market estimate. The drop in GDP means the Italian economy has now been in recession for one full year. The markets are awaiting German Factory Orders, which will be released later on Tuesday. The euro pushed across the 1.24 level, on positive market sentiment that the ECB will take action to curb Spanish and Italian borrowing costs. EUR/USD was trading at 1.2407. German Factory Orders declined by 1.7%, well below the estimate of -0.9%. German Trade Balance was a bright spot, posting a surplus of EUR 16.2 billion. The market forecast stood at 14.9B. French Trade Balance was less positive, as the deficit widened to EUR 6.0 billion, a four-month low. The German 10-y Bond Auction posted an average yield of 1.42%. This was higher than the previous auction, with a yield of 1.31%. German Industrial Production declined 0.9%, just below the estimate of a 0.8% drop. Standard and Poor’s lowered its outlook for Greece from stable to negative, and warned that the country was likely to miss the targets set out in the bailout package, which would increase the possibility of a default. The euro was slightly down, as EUR/USD was trading at 1.2361. In its Monthly Bulletin, the ECB revised downwards it growth forecast for 2012, from -0.2% to -0.3%. It did predict positive growth in 2013 and 2014. Italian Trade Balance sparkled, posting a surplus of EUR 2.52 billion. The estimate stood at a much smaller surplus of 0.97B. US Trade Balance and Unemployment Claims will be released later on Thursday. The euro is dropping, and is testing to 1.23 line. EUR/USD was trading at 1.2308. 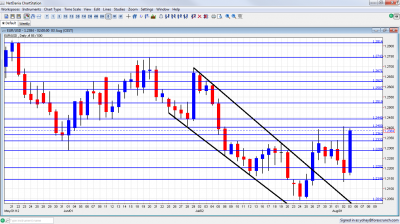 Further below, 1.2330 is another historical line after being the trough following the global financial meltdown in 2008. It’s stronger after working as strong support. It should be closely watched if the pair falls. The now previous 2012 low of 1.2288 is now minor support.

As the chart shows, the pair made a breakout of out of the short term downtrend channel, breaking above downtrend resistance.

Things move slowly and choppily in Europe, and it takes time for events to materialize. Nevertheless, we might look back at August 2nd and see it as a date when the tables turned, and not as another can kicking event. The expected course of events is that Spain asks for a bailout and the ECB uses its full firepower to cap the yields at low levels. A determined move, that is now on the cards, would be very different from the ECB’s bond buying so far. Also Spain takes its time, but it’s certainly moving. The risk later on this month is Greece (August 20th deadline), but at least for now, optimism will likely outweigh the fear.

In the US, the QE3 camp found some encouraging words in the FOMC Statement, even though the changes were subtle. With US yields at low levels and a better than expected jobs report, hopes will likely be pushed back, and not for the first time. 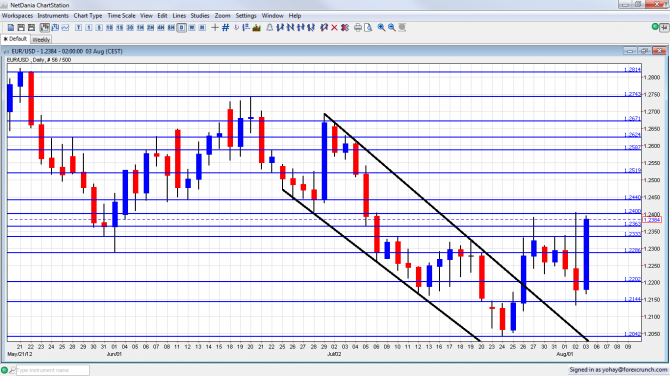 Euro/dollar  fell to critical support but made a huge comeback. While Draghi disappointed markets with no immediate action, he opened the door to full QE and is now waiting for Spain to walk through. Spain took a big step. Is this a significant positive change in the debt crisis? Many problems still remain.  The upcoming features Italian GDP and important German figures. Here is an outlook for the upcoming events and an updated technical analysis for EUR/USD.     Contrary to previous performances, Draghi was not at his best and the absence of bond buying from the only factor able…