Euro/dollar  enjoyed the new hope for a big plan to resolve the crisis. The upcoming week is very busy, and consists of a rate decision and yet another European Summit. Will this one be different? Here is an outlook for the upcoming events, and an updated technical analysis for EUR/USD, now on higher ground.

6 central banks coordinated to cut US dollar swaps by 50 basis points. This provides some relief for the troubled European banks, but doesn’t solve Italy’s big problem: high costs for debt. Many ideas are floating, but there’s only one player that is able to provide a game changing move: the ECB. Will it finally act?

Updates: According to one report, the ECB is preparing a â‚¬1 trillion fund for this. There’s no confirmation. France and Germany reached an agreement about changes to the EU Treaty. This sent the euro higher, but the rise was limited and the pair remains in the 1.3420 – 1.3480 range. S&P warned all euro-zone nations about their credit ratings. This includes Germany’s perfect rating and also France, which got a two-notch warning. EUR/USD is in lower ground, but didn’t collapse. A senior German official expressed pessimism about the EU summit. In addition, the situation of European banks remains worrying, and the Greek bank run intensifies. EUR/USD is down to just above the 1.3360 line. Draghi cut the interest rates, announced big liquidity measures but clearly denied any form of QE, not direct nor circular through the IMF. Hope seems lost for the EU summit, and EUR/USD is down to 1.33, EUR/USD fell even lower on the weak results of the EU summit, but hopes for Chinese aid and some flexibility from the Bundesbank helped the pair recover once again. 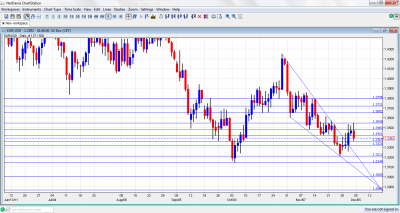 Euro/dollar traded in low levels in the first half of the week. It then jumped and re-entered the wide 1.3420 – 1.3550 range (mentioned last week). After failing to break higher, the pair fell back and eventually closed at 1.3392.

The round number of 1.38 is a minor line of resistance, capping a recovery attempt in November. 1.3725 worked as support several times in October and served as a pivotal line in the range.

A strong line is 1.3650, which worked quite well in recent weeks, and was only temporarily breached. It is one of the more distinct lines in the range. Next we have a tough line: 1.3550 provided support early in September and then switched to resistance after the fall. It proved it can work as good resistance as well, as seen after the Non-Farm Payrolls.

1.3480 is more minor now after being a pivotal line in the range. It also had a role in September. The 1.3420 line held quite well, and when this bottom border of the range was broken, it  immediately  switched to resistance – a distinct line separating ranges.

Very important support is at 1.3145 which is the lowest point seen in the current round of the crisis. It is closely followed by 1.3080, which provided some support when the pair was range trading at the end of 2010.

The round number of 1.30 is psychologically important, before the low of 1.2873 seen early in the year. This year to date low is of high importance.

A sharp and narrowing downtrend channel can be seen on the graph. Downtrend resistance begins at the end of October but is broken now. Downtrend support was formed later on but is more distinct – it wasn’t violated.

Hopes towards the summit can remain high through the week, but the choices are not pretty. Fiscal integration cannot be realized quickly. The ECB can definitely stabilize the situation by buying bonds en masse. If this happens in the desired scale, the central bank will not be able to drain the money out of the markets, and this will turn into a full QE program that will weaken the pair. Cracks in the ECB’s sterilization program were already seen. If the ECB isn’t utilized in such a manner, the bond rout will continue, with a danger that Italy loses access to the markets. Italy is too big to bail, and even German bonds are not safe anymore.

Euro/dollar  enjoyed the new hope for a big plan to resolve the crisis. The upcoming week is very busy, and consists of a rate decision and yet another European Summit. Will this one be different? Here is an outlook for the upcoming events, and an updated technical analysis for EUR/USD, now on higher ground. 6 central banks coordinated to cut US dollar swaps by 50 basis points. This provides some relief for the troubled European banks, but doesn't solve Italy's big problem: high costs for debt. Many ideas are floating, but there's only one player that is able to provide…