The Euro had a great week, recovering some of the losses it encountered during May. The upcoming week’s highlight is the rate decision with the press conference of Trichet. Here’s an outlook for 9 events awaiting us, and an updated technical analysis for EUR/USD.

We’ve seen some risk averse moves in the past week: Bad US figures weakened EUR/USD, such as in the ADP release. But eventually, the hopes for Greece pushed the pair higher, as well as the broad weak picture for the US, seen in Non-Farm Payrolls. 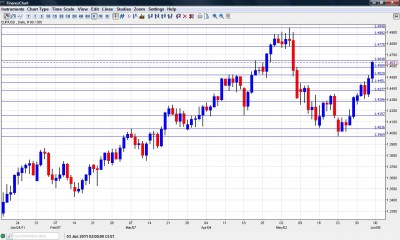 Euro/dollar gradually climbed and eventually found strong resistance at the 1.4450 level (discussed last week). After climbing above it, the pair continued higher and made huge gains all in all.

Technical levels, from top to bottom:

The highest level we have is the highest in about two and half years: 1.4940 seen about a month ago. It’s followed by 1.4882 has been a distinct cap.

Below – 1.4775 was the support line of the tight range trading. 1.47 is a rather minor line, that only temporarily capped the pair on its way up.

1.4650 was a peak on the way up, and then switched to significant support. It is quite close now 1.4580 was a line of resistance in the short stabilization period a few weeks and also in mid-April. It is only a minor line now.

1.4520 was the bottom border of that range and an even stronger line, as it already worked as tough resistance a few weeks ago. Significant support is at 1.4450, which was an important line of resistance just now.

1.4375 provided support a few weeks ago, and held the pair for a short period of time before the final fall. is now important support. The peak of November 2010 at 1.4282 managed to temporarily cap the pair’s rise, but it is a weak line.

1.4160 was a swing high in the past, and also a swing low a few weeks ago, before the big surge to higher levels. It was shattered in the past weeks and remains a pivotal line now. Just above the round number of 1.40, we find very important support at 1.4030 – this is a very distinctive line, as seen in the graph.

Lower, 1.3950 was a pivotal line when the pair traded in lower ranges and proved that it is of high importance. The fall of the pair stopped short of reaching this line just now. Another significant support line is at 1.3860, which worked in both directions earlier this year.

The last important line is 1.3440, that is very distinctive. It was a clear border between ranges, more than once in recent years. A break below will be a very bearish sign.

The US Non-Farm Payrolls completed a series of weak data in the US that shows that whole world is slowing down. Also the hopes for Greece continue to boost the euro. On the other hand, the situation in Greece may flip. The key event is the press conference by Jean-Claude Trichet – another delay of the rate hike can send the euro sharply lower.

Here are some recommended reads for the pair:

The Euro had a great week, recovering some of the losses it encountered during May. The upcoming week's highlight is the rate decision with the press conference of Trichet. Here's an outlook for 9 events awaiting us, and an updated technical analysis for EUR/USD. We've seen some risk averse moves in the past week: Bad US figures weakened EUR/USD, such as in the ADP release. But eventually, the hopes for Greece pushed the pair higher, as well as the broad weak picture for the US, seen in Non-Farm Payrolls. EUR/USD daily chart with support and resistance lines marked. Click to…